This past Friday, Zeke, Bruce, and I gave a presentation/show-n-tell at my daughter's school.  It went off without a hitch, especially since it was basically a repeat.  Bruce was able to reinforce the importance of wearing a helmet.  He crashed last week on his road bike when the tube blew apart at the seam, blowing the tire off the rim and sending him headfirst into the pavement at 20mph.  Except for a cracked helmet and abrasions down the left side of his body, he was o.k.  His bike was another story ... about $1500 in damage.  So he was able to use his body as show-n-tell.  I think he really got through to the kids!  At least I hope so, since when I asked a number of them if they had a helmet to go with their bikes, they said no. 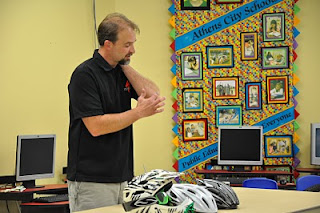 Zeke incorporated life lessons in to his mountain bike stories.  Things like always be prepared, be humble, respect others, don't be told you can't do anything because you are a girl, and man up.  Zeke also talked me up quite a bit, but what he did not know was that while he was doing that, I was talking him up just right across the hall.  Those kids definitely know now that neither gender nor age can come between you and your dreams. 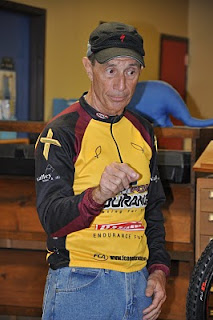 I talked about nutrition and tried to get down on their level by taking a couple characters from the movie Cars.  Simply put, if you want to be fast and endure like Lightning McQueen, then you need to incorporate lots of fresh fruits, vegies, and lean meats into your diet.  But if you indulge in too many fatty foods and sugary snacks, then you will end up slow and broke down like Mater.  I told them to get their parents to stick to the perimeter of the grocery store and don't make too many trips down the aisles.  We also had a quiz where I held up two foods and they told me which one was healthier.  These kids know ... they got it right every time!  They just need their parents to set a good example and help them stick to the right food choices. 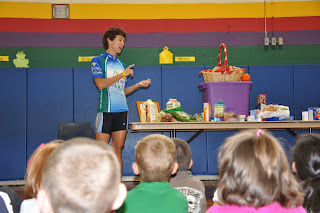 At the end, Mrs. Johnson's class presented me with a big poster wishing me good luck in the Burn.  A lot of other kids also made individual cards for me.  Carly and I thought that was awesome! 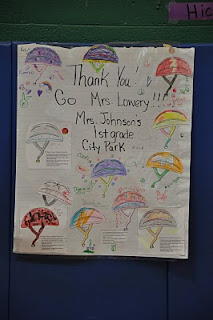 I wonder if I made an impact on these kids.  I did not have to wonder long.  On Sunday when I was in Ingles shopping in the produce section, a lady towing 2 kids and a husband, ran up to me and asked if I was the one who had given a presentation at City Park the other day.  Before I could say yes, she was graciously thanking me and telling me that I did make an impression on her daughter.  Instead of buying the usual cookies and chips, today they were purchasing lots of fruits and vegetables.  Wow!  I was amazed.  I told Nicole how proud I was and that her food choices would make her smarter and stronger.

I can only hope that I influenced more like Nicole.  Looks like I will be going back to the schools next year!
Posted by Carey Lowery at 9:46 PM
Email ThisBlogThis!Share to TwitterShare to FacebookShare to Pinterest
Labels: fundraiser, school presentation