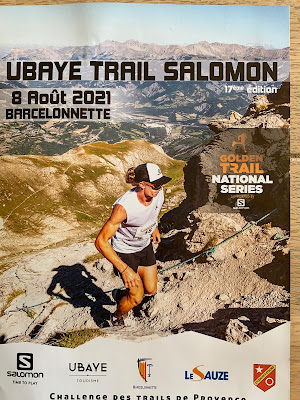 Back in June, when I was planning my trip to France, Kip mentioned this trail run that was taking place in Barcelonnette.  Sure, why not?  Let's do ALL the outdoor things, as this might be my only trip over to Europe.  I replied I was in for the 12k (7.5 mile), as I saw that as doable for not having trained for a running race since the 2019 Cloudland Canyon Half Marathon. Kip immediately responded that I needed to sign up for the 23k (14 mile) race, as I would go through two Cols (Gaps) and see so much more! I had to think about this, for a little bit, as I had not run that distance in 2 1/2 years.  Not to mention the fact that there was over 1000 meters (3500 feet) of gain, twice that of Cloudland Canyon.

The masochist in me had me pushing the "enter" button in less than a day's thought.  So be it, BDR #5 was going to happen August 8 at 9 am. With only rest day on Saturday, as I had been riding and hiking every day prior to that, at altitude nonetheless, this was going to be a challenge.  Oh, and no poles allowed;  it seems that racers were getting stabbed at the Start in previous years, so they were outlawed.

Being the only American in the half, the announcer gave me a shout out at the start.  Not that I needed any more pressure to perform (or finish). There were 390 in the race and EVERYONE looked fast!

The start was fast as it was flat'ish for the first 3 miles.  I settled into a sustainable pace and watched as dozens passed me by.  The pavement soon became gravel and then once I arrived at the small town of Uvernet-Fours, the course pitched up steeply as I entered the single track.

The first 1 1/2 miles was at no less than 20% grade with several sections at 30+%.  This is where my power hiking skills came into play and I began passing a lot of racers.  The difficult part was that the single track was tight and many did not want to yield slightly so I could get by. Then there was about 1 mile of reprieve before the next push began.
Although the weather was perfect, 50 degrees, low humidity, the sweat was dripping off my nose like a leaky faucet, as I ran/hiked to the top. The second push was 3 miles starting at 5000 feet and topping out at 6900 feet.

I was still in my happy place despite the grueling climb, as I continued to pass people.  I stopped briefly to take some photos at the Col de la Coche.  The trail flattened a bit along the ridge and I was able to take more of the absolutely stunning views in and shoving my mouth full of nutrition.
Along the top, I also had to avoid cow patties and even the cows themselves.  They were right there trailside, but fortunately very docile and allowed me to pass without incident.
At about the 9 mile mark, I hit the Col de Alaris, and then the long descent back down to the finish began. This was where I began to implode.  The trail was maddingly steep, loose, and rocky.  The average grade had to be around -17%.  Looking back on my Strava, there were times when it was -35%.  I thought my quads and ACL's were going to explode.  It would have probably been less painful to ball up like a hedgehog and just roll down.  I am a mountain biker; this is the part I would coast down.  But when running, the downs are worse than the ups, at least for me.

All those racers I passed on the way up easily passed me back on the descent.  Some were absolutely flying.  I was most impressed by how they seemed to easily tackle what for me was some of the hardest terrain I have ever run upon.  My knees really began to bark about 1/2 way down and there were times when I could only muster a walk.
There was a short break where I popped out onto a double track road and got to run uphill.  I have never been more thankful for seeing a positive grade!  I was able to pass several as they slowed to a walk.  But then the final tortuous descent began.  Think running down the most eroded section of Black in Pisgah; I was throwing F-bombs left and right!
Finally I hit flat paved road for the last 1/2 mile back to the finish.  My legs were trashed; I don't even think I could call what I was doing a "run" to the finish.  More like a shuffle ... in slo-mo 😂.  I finished in 3 hours and 28 minutes.  At least I met my goals: no face plants, no rolled ankles, and finishing under 3:30.  The women's winner came in at 2:17!

Posted by Carey Lowery at 9:58 AM No comments:
Email ThisBlogThis!Share to TwitterShare to FacebookShare to Pinterest
Newer Posts Older Posts Home
Subscribe to: Posts (Atom)