By now, I would have had 2-3 races under my belt.  Gallbladder surgery set me back, but the end result is I finally feel great again.  Another positive is that my weight is 10 pounds less than this same time last year.  I figured that cost about $200 per pound or $2.27 per gram.  That's so much cheaper than trying to get my bike lighter!

My first race will be the Snake next weekend.  And this is my weapon of choice: 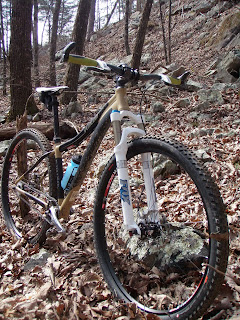 If you would have told me last year that I would be racing a 29'r hardtail SS at the 2010 Snake finale, I would have called you crazy!  As this is a training race, Coach has explained to me that this is just one of many steps towards my "A" race of the year.

This year has just been busy, busy, busy.  And at this point, it doesn't seem like I have accomplished much.  Charlie has been gone alot; he works for Ducks Unlimited and late winter and early spring are super busy times for him.  So I have been doing the single parent thing. 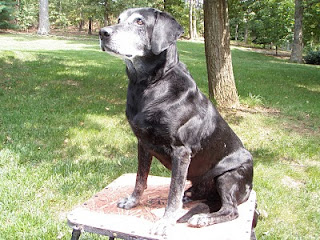 Reese, our 13 1/2 year old lab, has cancer.  I have done two surgeries on him in the past 4 months.  He has done amazingly well and I am glad I decided to do the procedures.  He would not be here today if I hadn't.  To beat it all, Reese had a fantastic duck season in Arkansas, retrieving well over 100 ducks and geese.  He also managed to shame a couple of younger labs in the process!

I am also working on a fundraiser for my daughter's school.  My goal is to raise money for their physical education program and to educate the kids on cycling, fitness, and health. 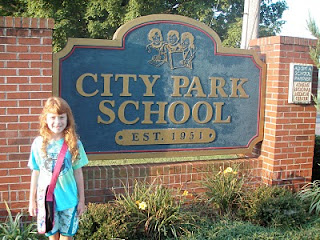 And to raise money I will be using this race, my "A" race, as a platform with which to do it.  I have not done this kind of racing since 2006 and once again, I would have called you crazy if you told me I would be doing another!

Devoting my time to work, family, training, and community has kind of put "blogging" on the back burner.  I will try to do better.  I hope to get back to some sort of normalcy soon.  But then again, is there such a thing?  Oh, to be a kid again!  I keep telling Carly to not be eager to grow up and so far she is taking this advice!
Posted by Carey Lowery at 6:19 PM 1 comment:
Email ThisBlogThis!Share to TwitterShare to FacebookShare to Pinterest
Labels: 24 Hour Natz, fundraiser, racing, Specialized
Newer Posts Older Posts Home
Subscribe to: Posts (Atom)