I waited up until the last moment to register, as I wasn't sure this race was gonna happen.  NUE series director, Ryan O'dell, was able to formulate a Covide-19 mitigation plan that was approved.  Unfortunately the Ohio DNR did not issue the permit to use the 25 miles of trail within Mohican State Park.  Therefore, according to Ryan, the race was shortened to 40 miles for the 100K.  And I was 100% ok with that.  Having come off of my Massanutten Ring adventure two weeks prior, I did not know if my body was up for a 5 + hour race.  Since I was staying with my Rescue Racing team mate, David Jolin, we had already planned to ride the state park single track on Sunday.

The start was a time trial format.  Groups of 5-6 racers in 1 minute increments, beginning at 7 am.  I was set to go off at 7:36 ... one of the last waves.  This gave me the opportunity to get in a proper warm up, since I didn't have to fight for position in a mass start.

The first mile was a lot of ups and downs as I rode the single track through Mohican Adventures.  Our little group of 5 got busted up pretty quick and I ended up solo once I hit the pavement.

On the pavement, I adjusted hand positions to get as aero a position as possible.  With no way of knowing where my competition was, I just had to go HARD the whole stinkin' time!  All those short intense Zwift races were paying off now, as I felt pretty good putting my little hammer down.

Ohio may not have mountains, but boy do they have punchy climbs.  Giffin and Kay were short (less than 1 mile) but had gradients that approached 20% in spots.

Once I hit the Big Hill climb, I knew that the Wilderness single track lay just ahead.  With skinnies on my bike (Bontrager XR1, 2.0), I was going to be slower than normal through the rocky single track.  With about an inch of rain the day before, the rocks were going to be slimy.

As I approached the infamous rock garden, I came upon a "turtled" racer.  This guy was upside down wallerin' in the rocks with his bike on top, still clipped in.  Fortunately, only his ego was injured, and after I helped him, I made the choice to not hop back on, as all my greasy rock-ridin' mojo was gone.  I ran through the garden probably just as fast as I could have ridden it anyways.

From there the trail mellowed and the flow was much better.  I still had to respectfully work my way around another half dozen or so racers.  I popped out onto the road and hit the aid station at mile 22.  Thinking I had another 18 to go, I stopped and swapped out a bottle.

Back in TT mode on the pavement for a bit and then I hit the Valley Stream gravel road climb.  Typically this is a kick in the groin climb, coming so late in the race, but today I had matches to spare.  One more climb up gravel road 3232 and then on to the final piece of private property where there was a hellacious two track slickety slidy descent.  I felt on was more like on skis than a bike.  This trail dumped us into a fairly deep creek crossing where all the mud was nicely washed off my bike.

I could see the paved road just ahead, but first I had to plunge into a mud bog of unknown depth.  There was absolutely no way around this!  Axle deep, I about toppled over but managed to hang on and ride it out.  My bike was now filthy again.  Somehow in the foray, I managed to roll a small bale of hay onto my cassette.  I had to stop as my shifting immediately went to shit.  It seemed to take forever to  detangle my cassette!

Around mile 27, I knew where I was on course and that the finish was just ahead.  I thought I had cut the course, since I was expecting another 13 miles.  I had that "Oh, shit!" moment ... thinking I was gonna be DQ'd.  But I had been paying very close attention to all the signage and confirmatory tape and had absolutely  no idea where I could have gone wrong.

So I raced back through the Mohican Adventures area, hoping that Ryan was wrong with his mileage, but willing to fess up that I cut the course if it was indeed 40 miles.  I crossed the finish line in 2:29:50 and immediately went to Ryan and asked.  He confirmed that it was only 30 miles.  And after the last short course woman came through, I found out that I had WON!  Now that was a nice surprise as the competition was fierce.  Talking post race to Lara, she said she rode some bonus miles on the 100 mile course.  And Mary said that she needed to lose a few Covid-19 pounds.

I want to thank Ryan for his persistence in having this race, despite all the social media negativity.  And a big shout out to all the volunteers who gave up their day so we could play. This put all of us back into a good headspace.

The one thing I will tell you is that the post race vibe was great.  A lot of laughing and a lot of beer drinking was happening.  It felt good to see some sense of normalcy again.  Being outdoors and being active are two things that will bolster your immune system, not being locked up inside unable to do anything but stare at the walls or the TV.

And no, I did not die!  Nor has anyone else from the race.  Use common sense, live an active lifestyle, eat real food, get plenty of sleep, enjoy your family ... this is what will get you through this pandemic.  Don't wait on a vaccine.  The flu vaccine has been around for a long time and you see how effective it is. 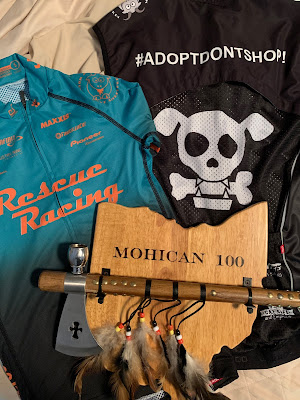 And the next day, I had enough energy to ride the fast and dry trails within the state park, with friends.