The Hill of Truth

This weekend I competed in a local 12 hour race as a tune-up for La Ruta. I was originally supposed to race with Ursula on a duo team, but she was too banged up from a dog taking out her front wheel on a road ride just last weekend. I told myself that this was a training race and not to go all out. Luckily the competition was not too fierce and I did not have to push myself to the limit.

This was the first race of the year where I did not have butterflies leading up to the start. I was actually able to ride a steady tempo and enjoy the course, the festivities, and catching up with old friends. I stopped several times, both on and off the course, to talk with cycling friends I had not seen in many months. I ended up with 10 laps in 10 hours. With a 3 lap lead, I decided to end early and save my legs ... and back.

You should really check this race out (www.highland-adventures.com). This one was where the endurance bug bit me a few years ago. The course has it all: rocks, roots, smooth flowy sections, power climbs, sweet, fast descents, and one long powerline climb known as "The Hill of Truth." The race promoter does a wonderful job: cash for the open classes, several premes, festivities for the family and support crew, and online timing so that loved ones at home can keep up with the race. New this year (and quite a surprise as I sat at my pit watching racers finish their laps) was the "naked lap." Yes, some crazy bastard rode a lap at night with only a Camelbak, shoes, helmet , and light.
Posted by Carey Lowery at 7:51 PM 2 comments:
Email ThisBlogThis!Share to TwitterShare to FacebookShare to Pinterest 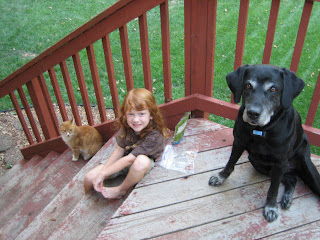 After 10 days of antibiotics and 4 days of feeling well, I can safely breathe a sigh of relief. Reese, my companion for 11 years and who loves to duck/squirrel hunt as much as I love to race, is infection-free. Last Tuesday he scared the hell out of me when I found him out in our backyard disoriented. When I reached him, he was burning up! Since Charlie was out of town, I called my Dad to see if he could watch Carly and get her in bed while I took Reese to the clinic. My dad, the greatest, came over. I rushed Reese to the clinic where I took his temperature and it was 104.5! Yikes! I promptly drew blood, placed an IV, and started administering fluids and antibiotics. Yes, I did this solo. Reese is the best when it comes to needles. He never flinched! Clean sticks both times. After a series of diagnostics, my diagnosis was a prostate infection. What irony. You see, Reese has not been castrated as we have been trying to get a pup out of him, but the poor guy is a virgin. He just gets too excited around women and is clueless in the "love department." And now the appendage(s) that are pretty much useless on him could have killed him.
I have been wanting to "fix" him for some time, but my husband has not. I guess it is a guy thing. But after this crisis, I might be able to convince him. Reese has never been sick; he has had some cuts, scrapes, and bruises, but nothing that required intensive care. Hopefully this has scared some sense into Charlie.
But what Reese lacks in reproductive skills, he more than makes up for in loyalty and unconditional love. He is wonderful with my daughter and two cats. He helps me thin out our ever growing squirrel population. All I have to do is show him the pellet rifle and he begins to shake with excitement. Wounded squirrels beware! In his younger (and my beginning days of biking), he loved to run the singletrack. Now we go on hikes; no worries of heat stroke that way. And come November, my husband and him are hunting ducks. They are "crazy go nuts" about ducks. And as with the squirrels, he has never let a wounded duck get away. One of his longest hunts lasted 20 minutes after Charlie "winged" a mallard. It fell out of the sky, and when Reese swam out to retrieve it, the bird kept diving on him. When it surfaced, Reese would paddle over to it, only to have the bird dive again. Finally the duck tired, and Reese was able to grab it.
Reese has been a part of this family for so long, I can't imagine us without him. Until that day comes, I will throw the ball a little longer, love on him a little more, plan an extra hike here and there, and cherish the moments when my daughter plays with him.
Posted by Carey Lowery at 8:25 PM 6 comments:
Email ThisBlogThis!Share to TwitterShare to FacebookShare to Pinterest

So I decided to do a nice moderated paced recovery ride. I had lifted weights yesterday and needed to spin out the lactic acid and soreness in my legs. I rode a route that I had not done in about a year; mostly level, with a few rollers and one 2 mile climb. The first hour was easy enough. As I was beginning to loosen up I hit an area where in the past had been farm land but now was turned in to subdivisions. Just as I crested a small hill, a large dog gives chase. Boom! Up out of the saddle for a 100 meter sprint! The dog gave up and turned around. I settled back down at an even easier pace; legs were burning. I swear, after about 5 minutes, another dog gave chase! There I was, up out of the saddle again for another 100 meters. This scenario repeated itself 3 more times. My first thoughts were, "Damn dogs!" After the 5th interval and no accidents, I was like, "Hey, that was a pretty good workout!" I finished my ride with an easy paced cool down. I may have to consider this route as a routine workout. The dogs never tried to get close and bite my wheels; they tended to stay off the road and ran parallel to me. Just as long as I do not ride this every week, I think I can keep them from lying in ambush.
Posted by Carey Lowery at 4:56 PM No comments:
Email ThisBlogThis!Share to TwitterShare to FacebookShare to Pinterest

The Devil Made Me Do It 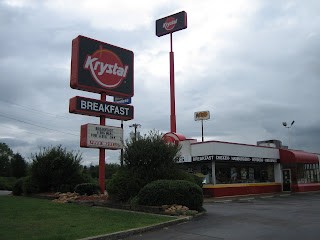 This is what I crave after a race or a long training ride. At no other time does a sackful taste so good! But in order for me to indulge, the ride/race has to be at least 6 hours.
Zeke and I put in 6 hours today on the Snake. It was pretty loose and sketchy in places, but we managed to keep the rubber side down. We also explored some adjacent forest service roads and unmarked trails. On one particular doubletrack, the hills to our right suddenly came alive with multitudes of barking/howling hounds. And then suddenly we were right on someone's back doorstep; scattered wrecked trucks, appliances on the porch, fightin' chickens staked in the yard. We got out of there in a hurry. No banjo music was heard! Whew!
For those of you who have not ridden this trail, it is technically sweet and savory. You gotta check out the race series that is put on the first Saturday of January, February, and March.
Posted by Carey Lowery at 9:12 PM No comments:
Email ThisBlogThis!Share to TwitterShare to FacebookShare to Pinterest
Newer Posts Older Posts Home
Subscribe to: Posts (Atom)