Takes A Lickin' and Keeps On Tickin' 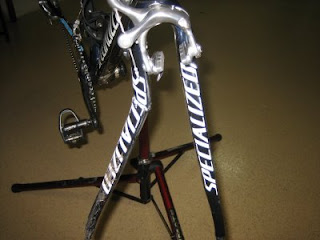 That would be me, not the bike. This is how it unfolded ...

Today was supposed to be a "ride how you feel" day. I was feeling pretty good and with temps in the low 60's, I was not about to pass up a good day on the road. My legs were light and springy; I would say I was riding "without a chain."

Coming back home I was heading North on Cedar Springs Rd. The white Grand Am was heading South. I saw him and the red pick up behind him (as I always try to be aware of vehicles near me). Without warning (no turn signal), the Grand Am turns left into my path.

Not even a chance to brake! All I remember is the initial impact. The next thing I know is I am staring down at my broken bike. Adrenalin and anger boiling inside me, I rush the car, ready to do battle. What do I see in the driver's seat, but a little old man with an oxygen line running to his nose.

Man! I was so mad, all I wanted to do was hit this person ... but how could I strike an 87 year old man who can't see or breathe? He was pretty upset and kept asking if I was o.k. Shaking his head, he said, "I never saw you." A pretty typical response when cyclists get hit by vehicles. Now I was worried about him; I didn't need him stroking out or having a heart attack. I told him to just stay in his vehicle until the police came. He said he would probably lose his license over this to which I replied, "That's probably a good thing. You could have killed me!"

The two men in the red pick up stopped and offered their help and also to stay and give their eye report to the police. I asked them if they saw the whole thing and they did. Since I did not remember anything except the thud of my body against the vehicle, I asked them for their account. The younger man said that when I hit the right front quarter panel, I catapulted over the hood and landed on the opposite side of the car. Then I immediately sprung up and went running after the white car as it slowly came to a stop about 15 yards from the point of impact.

What I cannot figure out is how I landed. Nothing above my waist was damaged, body nor clothing. From my power file, I was going 20mph at point of impact. Did I land on my feet? If I had landed any other way, I am sure I would have had some abrasions or torn clothing. Thank goodness for that as I was wearing my new Specialized kit.

So, I have a large bruise on my right quad, bruises all over my left lower leg, and a deep cut on my right lower leg. Other than that, I am o.k. Thank God!

My bike was not so lucky: broken fork, cracked frame, and two taco'd wheels. Not sure about the PowerTap. Fortunately, the driver's insurance is through State Farm, who sponsored our team a few years ago. My Dad said, "Just had to take the hard way to get a new bike for Christmas, didn't you?"

What really sucks is that I rode as safe as I could and did everything right. Lights both front and back and wore a light colored kit. Now I will have no power files for my coach for a couple weeks and I am going to be sore for the next few days. This person has really inconvenienced me and that is what is really frustrating. He license should have never been renewed; he even told me he was not allowed to drive on the interstate.

I am very thankful to be alive. I just hope that Charlie allows me to go back out on the road again. Now that the adrenalin rush is over, I do not need a drink ... I wanna get back out and RIDE!!!!!!
Posted by Carey Lowery at 10:10 PM 9 comments:
Email ThisBlogThis!Share to TwitterShare to FacebookShare to Pinterest

The rest of the story

Zeke here : Most folks know Carey as the fast,yet sweet red haired girl . HA ! She is devilish ! On the snake ride we checked out a creek crossing,so as to find the best line,which we did . On the way back Carey( as always ) got a big gap on me . She went up stream and walked across the creek . THEN she submerged a log right at the exit of our line ! You can guess the rest !!
Posted by Zeke at 3:52 PM 1 comment:
Email ThisBlogThis!Share to TwitterShare to FacebookShare to Pinterest 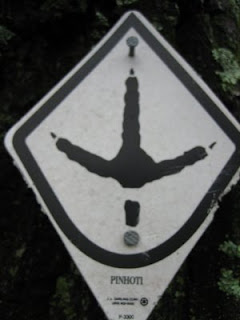 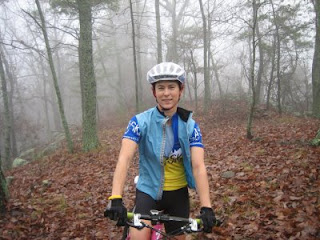 After 3 hard days of interval training on the road in less than ideal conditions, today Coach had me take it to the trail for a race-pace session. With the Snake just 2 weeks away, I headed down to Dalton and did an out-and-back on the first half.
Surprisingly enough, my legs felt pretty darn good right off the bat. The warm-up was a bit tough as the Pinhoti does not really have any flat spots, but after 30 minutes I gradually opened it up and then went full-bore for 90 minutes. I guess Coach really does know what she is talking about as I felt great even on the steepest of climbs.
The only thing that was slowing me down was the hundreds of thousands of hickory nuts scattered ALL OVER the trail. Add some wet leaves to the mix and it makes for a bit of "ice-skating" on the descents. Come on squirrels, let's get to work!

Mark your calenders as January 3 is the first of three TT's. This is one race that is not to be missed! Point-to-point, tons of climbing, rocks, awesome schwag, and equal payouts!
Posted by Carey Lowery at 9:12 PM 2 comments:
Email ThisBlogThis!Share to TwitterShare to FacebookShare to Pinterest

...about myself that you may not know. I got tagged by Namrita, so here I go:

Tag! You're it: Zeke, Lisa, Mallie, Julia, Sue, and Brigette.