With the start being at Mohican Adventures, instead of downtown Loudonville, Ryan added additional single track this year.  Effectively, the course was 33 miles single track and 33 miles gravel, with 8300 feet of elevation gain.  My race started at 9 am, but that additional 2 hours of sleep cost me  an extra 10 degrees of heat at the start, at an already steamy 74. I was racing Open Women, as that was the only category.  We had a good field at 32.

I opted to start with my Camelbak, as the first 22 miles were all single track.  I did get a decent warm up in and lined up in the 3rd row.  The start was a narrow gravel road that dumped us into single track after 0.4 miles.  I was able to work my way up into what I thought was in 10th place before I entered the trail.  Thankfully everyone in front was able to climb that first steep pitch, but the second one we were all off our bikes.  Fortunately it was short and I got back up to speed pretty quickly.  While my legs were nowhere near "sparkly," I thought they were going to be alright.

The state park trails were hero dirt and I settled in behind two other ladies.  The pace was not blistering, but something I thought I could hold for the day.  For the most part the state park trails were smooth and flowy, occasionally interrupted by a short section of roots or rock gardens.  One of the ladies in our little group was a little hesitant at flying over the rough stuff, so Janet and I passed her about a 1/3 of the way through.

I gotta call Janet my flow sister, as it was fun to follow her lines. I was able to dial down the focus just by following her wheel, which gave me some brain power to ensure I was eating and drinking adequately.

Probably around mile 11 where the covered bridge climb began, I knew the day was going to get ugly.  I was only a little over an hour in and already feeling subtle signs of fatigue. Even though I was shaded from the sun, it was beginning to feel like a sauna. I told myself to just get through the next half and let's see what happens.

Janet was feeling it too, as she started to slow on the climbs.  I got around her just as we approached the largest rock garden in this system.  This was a fun section for me, and for a few minutes I was able to block the pain that the heat and fatigue was causing.

The state park trail felt unbelievably long, especially when the single track "crossing guard" said he would see me again in 3 miles.  Three miles!!!  It took me 28 minutes to do this section.  Let the suffering begin!  Or not, as I came really close to pulling the plug when I hit the pavement after the waterbar-less horsey trail downhill.

I had a deep inner conversation with myself as I climbed the horse trail on the opposite side of the SR97. What I tried to block from my monkey brain was my strategy to finish:  just get to Camp Mohaven, the furthest point from the finish and then you will have no choice but to finish.  But could I keep this hidden from Mr. Monkey, who wanted nothing more than to spend the rest of the day lying in a cold creek?

That horse trail climb reminded resembled a muddy Club Gap climb; I was off/on the bike quite a bit until I hit the top.  Then I had to negotiate mud bogs along the ridge before finally descending down to gravel.  Oh, and apologizing to the ladies on horses as I rounded a corner with my I-9's buzzing.  Fortunately the horses stayed calm during this meet up.

The gravel roads over to The Outpost were a slight reprieve. I hadn't planned on stopping at Aid 2, but they had me with a Coke hand up.  Such a little slice of Heaven.  I didn't stop long for fear of the "Q" word.  The single track leading out was pleasantly dry.

There was a nice 2 mile pedal over to the Mohican Wilderness single track.  It was now "Hot as Hades" in my book.  With not much tree cover on the gravel, I was hugging the side of the road that afforded any bit of shade, even for just a few yards.  I came upon another woman; we commiserated briefly, but she sped up as we closed down upon the single track. 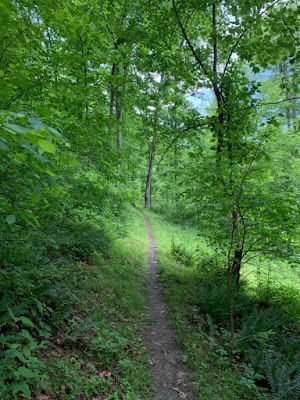 As technical a trail as the Mohican was, I actually felt pretty good through this 5 mile section.  Once again, I had to focus on the rock features and not the fact that I was dying a thousand deaths.  I cleaned all the rock gardens, save for a "dab" on that final right hand turn through it ... a small victory I will claim.

I was slowly closing on the woman who I briefly met on the previous section of gravel.  We hit the aid station together.  She was looking pretty cooked! Alyssa was there supporting her husband Jordan, as well as several others, including me.  Sweet!  I dropped my Camelbak and she handed me two bottles and I was in/out before I could even consider quitting.  I also made it out before the other woman.

At this point in the race, I was 36 miles and 4:22 elapsed time.  I knew I was slow, but damn!  I had expected to reach Aid 3 in 4 hours.  I rode a short bit of pavement over to the heinous powerline climb portion of the Wilderness system.  Although it was only a mile long, it was a sum bitch.  I died a little more here, pushing some sections.

The trail finally dumped me out onto Wally Road.  I then pedaled a miserable 5 miles of gravel over to Camp Mohaven.  At least it afforded me the opportunity to do some 1-legged pedaling in an attempt to relieve my left foot of some pretty intense pain, that had ratcheted up in intensity on the last bit of single track.  Hot foot, as what most cyclists call it, where it feels like a hot iron is being placed on the ball of your foot.

Entering Camp Mohaven, I was familiar with this 5 miles of single track.  As I began the climb to the top, I passed several guys that were off their bikes, just sitting, beaten down by the heat. I made it to the top and got another ice cold Coke hand up.  Ahhh!  The volunteers were rocking it today.  In and out after a 15 second guzzle, I motored on, hitting the techy sections with ease.  So thankful for a course that was near perfect condition.

Finishing up Camp Mohaven put me at the furthest point from the finish.  So now I knew I could get it done; it wasn't going to be pretty or fast, though.  I pedaled the gravel, once again doing some 1-legged drills to give my left foot a break.  As if I didn't have enough problems, my front rotor began to make some metronomic wailing noises.

Aside from the initial 20 miles in the state park, I had been riding by myself most of the day.  I was so relieved to be able to latch on to a fellow racer's wheel, if only for a couple of miles.  That little breather felt so good.  But once the gravel pitched upwards I was on my own again.  I came upon Nina about the 53 mile mark.  She was off her bike, pouring water over her head.  As I rolled by, I told her to catch me.  I first met Nina at the Iron Mountain 100K, where she had a fabulous day on the bike, at 16 years of age.  She was now a freshman in college and a bright young fiercely determined racer.  I don't foresee me ahead of her in many more races.  We rode together up the climb, but towards the top I slowly pulled away. I latched on to my drafting buddy and gained a few mph on the descent.  (Whoever you are, I still owe you a beer!)

With about 11 miles of racing left to go, something told me to look behind me.  As I did, I saw my team mate Dave about 30 yards back.  For  just a millisecond I was disappointed because one of my goals was not to let him catch me, but that was immediately replaced with joy.  His presence gave me an astronomical morale boost.  Perfect timing, too, as we hit the last section of single track before aid station 4.  And it was a beast of a sloppy climb.  I let David take the lead and pace me up that hill.  This was followed by a heinously steep descent where I did get squirrely and off track, but managed to save face.  The swinging bridge was rideable, but I flintstoned it across, not trusting my balance to keep me from getting entangled in the support cables.

I stopped at the final aid station to refill 1 bottle for the finish.  My stomach had held up good all day, but after 6 1/2 hours of intensity in the heat, it would tolerate no more than plain water.  Dave and I left out together and together we tackled the Valley Stream climb, followed by several more miles of gravel, and then that last ugly mess of trail which dumped you into the mud pit (I tiptoed around it, not wanting to go axle deep into that petri dish of mud).

I was so happy to see that the final bit of single track in the state park and the Mohican Adventures campground. Although my bike wailed like a banshee all the way home, at least my hot foot subsided.  We crossed the finish line together.  I finished in 7:29 (only 6 minutes of stopped time) which put me in 6th in Open Women.  Dave finished in 6:59 giving him a third place in Masters.

I was completely shelled after that one.  The BDR the previous weekend probably didn't help matters any, despite all the recovery tactics I employed.  Dave and I took a 30 minute soak in the cooling waters of the Clear Fork River. Normally, I am ready to eat and drink right after I finish, but today although I did drink, it took me 3 hours before I felt ready to put food in my belly.  Now THAT was a hard fought finish.

And now to try to heat acclimate for the next one ...