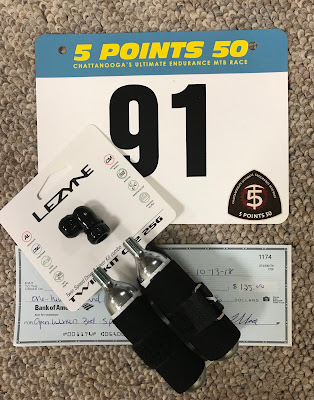 Although a month late, the first true day of fall fell upon race day.  Waking up to a starting temperature of 50 degrees, I had the first goosebumps of the season waiting for the race to begin.  I had no expectations other than to have fun and perhaps capture that third step.  With Jen and Kaley in the Open class as well, I knew I would be chasing them all day.  I did have a slight hope that if they ended up in a heavy battle for first, I might be able to reel one or both if either of them imploded.

The first 2 1/2 miles I was able to stay with the front group, but when we hit the first pavement climb, the group splintered into several small ones, and I settled into the third group.  I never saw Jen from then on and was only able to keep in contact with Kayley until we entered the single track.

I was with a small group of guys and ended up having to burn a match or two on the climb up Windy Shot, passing a few that began to sputter on the steeper pitches.  Normally I have some reserves for these early moves, but today my legs felt heavy.  Meh.  Whatever.  It was still early on and perhaps the diesel was just not warmed up enough; shoulda turned the engine heater on this morning!

The trails were in tacky good shape.  It felt great to be able to rail and carve corners.  Hanging Wall, Foot Wall, and Kettle Bottom were fassst!  Mostly because they were downhill.  The next section of trails heading over to CapRock were a bit more climby and my quads once again felt heavy.  No worries, though, as I still felt I was making good time through this section. Even so,  I was passed a few times and at the appropriate time by respectful racers.  One fella did call to my attention that he wanted around.  However, it was in a pretty tight descent and I was not about to come to a complete stop to let him around.  So he decided to attempt the pass without proper warning and came close to ruining both our days.  Man o man, I was wanting to flog him like only a Banty rooster could.  Fifteen seconds later the trail opened up and I let him by.  Good riddance!

Approaching the CapRock trail, despite wind proofing my shoes with duct tape, I began to lose feeling in my toes and forefoot as Raynaud's kicked in.  And if you don't know how much you need that tactile foot connection both to the bike and trail to ride through technical sections, believe me, you do.  I wasn't sure how I was going to manage the rocky climb, but alas, some poor fella just in front of me bit it hard on the steep descent into it.  He was ok, but it forced me to dismount and hike the bike ... which was probably just as fast.   But it still sucked, kinda, because I have cleaned this many times before.

I rolled on through the aid station and looked forward to Kindergarden, my favorite trail of all!  It was a bit congested here and with my frozen feet, I buggered it on the first section.  Then I had a heck of a time clipping back in because I could not feel my feet at all.  I finally got lucky and heard the audible click of reconnection.  From there on, I focused intensely on the trail and somehow managed to make it through unscathed.

Rolling back through the aid station and heading over to Hogsback, my legs finally decided to come out and play.  The heaviness had finally left and it felt great to power over the humpiness of this trail. The remainder of the 5 Points section left me all smiles as it flew by quickly and almost effortlessly.  The LongBranch connector section has 3 punchy loose cathead climbs that can beat you down both mentally and physically.  This is usually where I have my "low" of the race but today, I felt pretty good through this section.  Before I knew it I was at Aid 3, where I stopped, dropped my CamelBak, and grabbed a bottle for the final 15 miles.

Climbing up the freshly paved tarmac, it felt like the asphalt was grabbing my tires and slowing them down.  This reminded me of the 2007 LaRuta and climbed a 3 mile freshly asphalted road that was absolutely hellish!  Fortunately today's climb was short and soon I was descending the gravel into the Lula Lake Land Trust.  Quickly followed by the steep and punchy loose gravel climb, which, in year's past, was brutal.  Today, however, the legs were happy, the feet had finally thawed, and I powered the pedals over and over until the road planed out and soon I was rolling along the Bluff Trail.

The Bluff Trail was new for this year.  Due to some logging in this area, a portion of the course had to be re routed.  This happened to be a blessing, as the views along this trail were spectacular!  I managed to reel in one of my team mates, Michael, and got around him just as we were entering the Jedi Trail, which this year was raced in the opposite direction.  Still, so much fun.

The trails in the trust were in the best shape EVER!  Hero dirt galore!  Even the South Creek Trail which normally is slickety-slidy was perfect.  No dabs today!  Approaching the creek crossing, I smartly opted to walk it keeping my bikes bearings happy and me in one piece.  People do attempt to ride this crossing, but I just don't get it.  Risk to reward ration is much too high for me!

The other difference to this year's course is that instead of 2 miles of pavement followed by the infamous Powerline climb, the course directed us onto a short doubletrack climb up to the White Lightning Trail.  Mo' betta!  Even so, there was still a bit of climbing to get up to the connector trail.  I started feeling the heaviness settling back into the legs, but by this time I was also smelling the barn and able to fight through the pain.  Just get to the top, I told myself, and it would be all downhill from there.  I was able to catch my breath on the connector descent to FireWater.  Then it was a short climb to Bathtub Gin, my second favorite trail.  I passed a couple 25'rs here, encouraging a woman attempting one of the many technical rock features.  I can remember those days when I struggled like her and told her that she would conquer that rock face ... just keep trying!

As I was approaching the end of Bathtub Gin, I couldn't believe it but there was Mr. Smooshie P McDiggles, aka Scott Harper.  He was all bonkers.  I offered him a swig of my gel flask, but was pretty sure he wasn't wanting to swap spit.  He asked how much more of a beating he had to take and I told him, 4 miles.  I think I might have jinxed him when I made a DFL remark on a recent FB post.  Or was that a premonition?

The final bit of connector trail had more ups than I remembered.  Soon, though, it was all downhill to the finish.  I rolled through in 4:30, good enough for third place.  Even though Jen finished 4 minutes ahead of Kayley, there wasn't any battle royale that might have enabled me to close the gap. These ladies are just too strong to leave any pieces for me to pick up!

Justin and Amy, of Roost Racing, put on another excellent edition.  I do miss the old school trails of the LongBranch area.  However, despite that, I feel that this course is the best of them all.  You really nailed it this year, Justin!  I hope that you will continue to use this one in the future.


Posted by Carey Lowery at 1:50 PM No comments:
Email ThisBlogThis!Share to TwitterShare to FacebookShare to Pinterest

Do The Hard Things

If you saw my basement "lair," your first thought might be that I am a serial trail killer.  With bikes, race plates, tool chests, trophies, and water bottles strewn around, all that is lacking is newspaper clippings tacked to a board.

I thought that I was done with the Marji Gesick 100.  After a brutal 2017 finish, I had missed the belt buckle time cut off once again.  My 2016 finish was my best at 12:41.  I told myself that two finishes and two wins was good enough and that I was just not fit enough to get it in under the 12 hour cut off.  I wasn't getting any younger and there were other races out there to conquer.

But when the hundreds of MG FaceBook posts began pouring into my feed in the weeks leading up to the 2018 race and then with all the race day posts, the race began to call my name.  I was ok with not having raced it this year; I needed the break.  But Todd Poquette, race director extraordinaire, has a way of motivating those who want, who need a challenge.

Even though this race may be touted as the "hundred miler with the highest DNF race" and therefore perhaps the hardest single day mountain bike race, Todd and Danny, deep down inside, want each and every participant to finish.  And they will wait all day AND all night at the finish to personally hand each finisher their token.  The course is just straight up DAMN hard.  90% single track and super technical ... it never lets up.  As I coined the term, "no free trail," even the descents will work you over.

As I will soon turn 50, I've been thinking about 2019 aspirations.  I have had a very blessed life.  For the most part, it has been relatively easy.  But I believe that is because I have been raised to have a strong work ethic and that nothing in life is free.  If life was easy, would it truly be worth living?  I wonder about that at times.  I think it is in our nature to strive and overcome the hardships.  It gives us a sense of purpose. This is something that we as a society have lost as everything has become automated and can be had at the "click" of a button.  That one can get disability and have the government take care of them for stupid shit is just outrageous. That one would rather have a "magic" pill rather than work on improving their lifestyle and health to resolve a medical issue is unbelievable. We are turning into Jabba the Hut.

Whether it be at work or at play, when I am faced with a challenge that seems out of reach, the feeling of accomplishment when I pursue it and conquer it gives me a high that no drug can even touch.  That damn buckle will be my struggle for 2019!  It may be hard, it might be just out of reach, but come hell or high water, I will fight the good fight and accomplish that goal that has been out of my reach the past 3 years.

I encourage each and everyone of you to seek a goal, an aspiration, that you might think be out of reach.  I guarantee with hard work, grit, determination, and perseverance, YOU CAN OVERCOME the struggle and SUCCEED!

As David Goggins, former NAVY seal, ultra runner, and now motivational speaker says, "When your mind tells you you're done, you are only at 40%."  You have a reserve that is bigger than what you think.  So embrace the discomfort, embrace the suck, and destroy your limits!