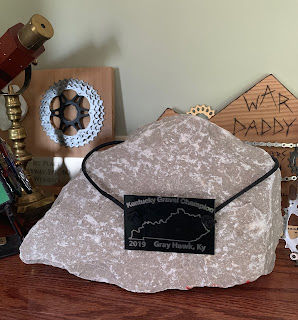 I finished up my racing in Kentucky this past weekend with the Gravel Championship.  As I was midway into this race, I thought that this, along with the War Daddy and the Forty 5, would be a great Triple Crown series.  All races had a hefty portion of "enhanced" gravel, including mud bogs that you could hit, sink, and never be found again.  The fun part was a sort of choose your own adventure, around these "holes."  I chose my Niner Air 9 RDO for all of these races, as it made my adventure faster and way more funner!

The venue for this race was Flatlick Falls Recreation area.  A great place for the family to swim and cool off in the river while we poor bastards were fighting it out in the Kentucky woods.  I chose to camp the night before and got a wee bit drenched from a pop up down pour that lasted about an hour.

A week before the event, I was the only one in the open category.  Comfortable Carey was ready for a day of play in the forest.  But then Mary Penta just had to sign up and Comfortable Carey got really bitchy.  But the "uncivilized doin' hard things" Carey got really excited for a most uncomfortable race and silenced the Carey who thought it was going to be a cake walk.  Fortunately "CC" makes up less than 5% of my nature.


The morning was super foggy but a coolish 72 degrees.  The race went off 2 minutes shy of 8 am.  We were led out the initial 4 miles of pavement for safety reasons.  The pace was pleasant and allowed the engine to warm up without sputtering. Once we turned onto the first gravel descent, it was game on.  With gravels flying and bottles launching out of their cages, I was kept my mouth closed to save my teeth and eyes open to not become part of any potential carnage.

On the first major pavement climb, I lost contact of the lead group and Mary.  I knew better than to burn any matches now.  Keeping my heart rate below the red line, I slowly watched her pull away and could only hope that I might see her again.  At mile 10 came was the Indian Ridge descent.  It was steep, slick, and chunky.  I saw two flats on gravel bikes.  I settled so I wouldn't get to squirrely; there were plenty of miles left to make up time.

Popping out of the pavement, I rolled the next few miles just under threshold.  Those that I had passed on the last descent caught back up to me just before the next gravel climb.  Had I known that, I could have saved some watts by tucking in behind them.  It would be like this for most of my race, in no man's land, on my own, under my own power, with no one to tuck in behind and conserve energy.


The gravel up to Aid 1/3 was smooth as a baby's butt.  It was hard not to go fast, as the legs were feeling sparkly and Mary was somewhere up ahead.  But the OG Carey kept repeating, "Patience, grasshopper."  Not needing anything at the first aid station (mile 17), I pedaled on. Tussey was full of deep baby fist sized gravel.  I was happy to be rolling 2.0's with front suspension.  Once again, I passed several gravel bikes, only to be subsequently caught on the flat paved road to Horse Lick.

I did stop at the second aid station (mile 28) to swap bottles.  In and out in less than 20 seconds, I once again got ahead of those who had passed me before.  The gravel began to get lumpy and chunky and soon puddles began to appear.  Fortunately, there were ride arounds, as it had been dry in the couple weeks leading up to the race.

Horse Lick is a 3.5 mile stretch of mudholes that the ATV's come to play in.  I only had to dismount and hike around 2 puddles; the rest I was able to negotiate alternate lines and make my way around the worst of it.  Halfway through, I did manage to catch a gravel racer who became my crash test dummy for the remainder of the holes.  Most were faster to ride through than around.  BTW, this fella had most excellent skills on skinnies, as I chased his ass all the way down Tussey!


Daugherty Wall was the next SOB climb.  Short, but with pitches approaching 17%, it would have many racers off their bikes and pushing.  Once again, I was happy as a tornado in a trailer park, with my Eagle drivetrain.  Hammering out these little beasty climbs is usually not my forte, but today, for whatever reason, the legs were responding when I asked them to.

Rolling along the ridgeline of Daugherty Road, I saw a familiar kit ahead of me.  As I got closer, I realized it was Mary.  Hot diggity dawg!  I caught up to her and together we pounded out the next few miles.  We talked about all things gravel, including DK and The Crusher.  We whoo hoo'd down the crazy steep paved descent of Dry Fork School Road. And then we came up on Jordan, which I thought was unusual.  But then I saw why, for before us were at least 5 cars driving on this gravel road.  They would not ... let ... us ... around! Soon our group of 3 became 5, as we were losing a lot of time.  We must have been behind them for 15 minutes, before they finally got the memo.  One by one, they stopped to let us by.  I called out a "Thank You" to each and every one of them.

After the creek crossing, where there was a water only aid station, I began to contemplate where I would try to make a move.  The initial climb out had my legs a little angry and Mary seemed to be still going strong.  I doubted my ability to open a gap, but just kept pushing the pedals, hoping for something, anything.  Towards the top, the legs came back to life.  We took a right onto rougher gravel and I knew the Carpenter Ridge Wall was approaching.  This 0.6 mile rugged double track climb was an average of 11% but had two pitches of at least 20%.  I started up just behind Mary.  The first steep pitch had us both off our bikes, but I could sense her struggle.  As soon as I was able, I remounted, and pressed down on the accelerator.  I came up to Jordan and told him I was coming around as I thought I had a gap on Mary by now.  I never looked around to see, but just turned myself inside out on this climb.

Once I topped out on the climb, I challenged myself to ride this last 20 miles like a TT.  I said, "This is how the last 20 at MG100 is gonna feel. Pain is your friend: embrace it, absorb it, and relish it.  Find enjoyment in discomfort.  Establish new limits."  I was pulling out all of my mantras for this push!  And it worked.  The first 8 miles flew by, as the gravel was smooth and I could hit the rollers with momentum.

As I passed by the third and final aid station, I was told I had 14 miles left.  Ooof, my legs said, as I was thinking only 12.  Having no idea how far Mary was behind, I just continued to pin it!  Lear Road was another technical double track with some muddy sections.  I took it conservatively, as now was not the time for a crash or flat.

A short section of pavement allowed me to refuel and empty my gel flask in preparation for the final 10 miles, 1 of which was that booger of a climb on Indian Ridge.  And it seemed a bit more slippery on the way up.  My rear wheel spun out a couple times forcing me off the bike.  I was probably faster HAB'ing it anyway.


Despite my ragged breathing and the intense burn in the legs, I kept the hammer down on the rollers of Indian Ridge.  I knew I would get a breather on the long paved descent soon.  I rested while descending Hwy 290, pedaling an easy cadence to keep the blood flowing to the legs.  Atkinstown Road was the final gravel section before the last 4 paved miles to the finish. Just crush this last mile and gravel climb and you can ease up a bit, I told myself.  So I crushed it ... well, as much as anyone can in granny!

Once on the pavement, I could smell the barn.  With slightly renewed energy, I knocked out those last few miles with a vengeance.  Rolling through the finish line, 62 miles later, with a time of 4:46, I was first woman and 10th overall.

Keith Cottongim put on one helluva grassroots race.  Kentucky is brutally beautiful, technical, and even old school.  I thoroughly enjoyed the challenge of this Appalachian enhanced gravel.  This ain't your typical gravel race.  Yes, it can be done on a gravel bike, but with less enjoyment and a higher risk of flats.  Out of the 8 divisions in this race, only one was won on a gravel bike.  It really ought to be called the Kentucky Mountain Bike Gravel Championships.