Every year my mind is put through a gauntlet the day before the first race of The Snake.  Mainly because of the weather, as it is usually cold and wet.  And by my standards, cold is defined as a temperature below 50 degrees Fahrenheit (and that number seems to increase by 1 every year).  Why can I not just avoid these uncomfortable thoughts?  Because I do seem to survive it, as I have been racing the Snake for 17 years, ever since its inception.  I suppose it is because I still do have some high expectations of myself.  And with a new year brings uncertainty to how I will perform at my age.

Even though I have long since stopped trying to beat my PR (3:21), I feel compelled to at least beat last year's time.  As if this is a way to justify my existence as a racer. While I have learned over the years to let go of the need to compare myself, my fitness, my technical skills to others, I still want to compare myself to my former self.  In my 40's, I was climbing higher and higher on the fitness mountain and now I am riding the plateau.  And even though I know that one day I will be riding down off that plateau in terms of fitness and skill, I am still scared to death of that day will come sooner than I would like it to.

But back to the race.  My friend, Melissa, came over for her first "running."  She spent the night with me and we drove down to Dalton to hop on the shuttle for the ride to the start at Dry Creek. The bus was so warm I hated to get off, but the driver was gracious enough to allow me back on after I had collected my bike and registered.  Another 15 minutes of warmth, before heading back out into the cold (46 degrees).  I tried to stay warm by doing jumping jacks and air squats while waiting in line for the race to start at 8 am.  I was toward the front of the line, so I had a fairly clear trail ahead of me.  Fortunately I had dressed just right and once the gun went off, I was warm again.

The first two miles on the forest service road I rode conservatively, giving my legs ample time to warm up, as well as to negotiate the mud bogs safely.  The Bridge-Master had installed 1 or 2 more sections of the portable bridge, so I had a dry creek crossing of Dry Creek.  Yea to dry feet!  The climb up to the first section of single track was its usual sucky self and quite muddy through the corners.  I had decided to take it easy on the first half and see if I had a little more energy to negotiate the final 7 miles of tech on near Dug Gap.

Entering the single track, my legs felt fresh, but I held back and rode consistently.  Soon I heard Eric behind me and commend us ladies on our skills. Ladies?  I did not realize I had someone on my wheel.  Once the trail opened up, I asked if she wanted to pass.  As she did so, I was quite surprised as she looked very young!  I rode just behind her, wondering who she was, as I had never seen her before.  So smooth and so fast on the uphills, I was impressed!  She slowly pulled away from me, as we had to heave our bikes over this huge downed tree.  One of the few times I think it sucks being 5'5".

As I was cresting the climb up to the fire road descent, I heard my name being shouted out from afar, "Go Carey Lowery, kill it!"  At that very moment, I didn't think I was the killer, as my pace was all about surviving this first half.  But it did give me a smile and a little bolster to my mental fortitude.  Thanks Eric!

Eric soon caught up to me on Pine Needle Hill, but did not seem too interested in passing.  Said he had been feeling a bit "off," the past week.  I asked if he wanted around on the descent to which he said no.  I then told him not to make fun of me on the downhill.  With eyes watering so bad from the cold wind, I descended half-blind, relying on memory and a prayer. As it leveled out, Eric passed me.  I secretly wished him a mechanical-less ride.  That poor guy ... he deserves one!

I got my feet soaked at the second creek crossing.  I always take the little detour to the left, as it seems to be not as deep and a quicker way to negotiate the crossing.  However, just before I entered the water, a rock took my front wheel out from under me and almost kerplunked me into the creek.  I managed to land on my feet, in the water.  So be it for dry feet.  They did get cold but never completely froze, as the sun came out to play and turned a cold start into a wonderful mid-morning ride.  I didn't even complain about not being able to see sections of the trail for the bright rays raining down upon me.

I came upon Angie as I approached Horn Mountain.  Told her how we must be getting old as we were not racing our single speeds, like in years past.  The deep crevasse stymied her and she dismounted.  Having figured out the approach, even though it was getting deeper every year, I rode through it.  I ran up the short but muddy section after the water crossing, but then managed to ride everything else clean, including the short steep switchback. That first uphill is always an SOB, but I just shifted to granny and spun my way up.  The next three climbs on that mountain try to take your soul, but I was determined to clean them; almost did save for one short dismount when my derailleur decided to wrestle with a stick.

The remainder of the first half was a blur, as I just rode on autopilot to the SAG.  I hit the parking lot at 1:47, 2 minutes faster than last year.  Yes!  And with a lower perceived exertion for that first half, that gave me a confidence boost.  I was in/out like a NACAR driver, although I took a moment to talk to a volunteer who gave me words of encouragement. The initial climb up Middle Mountain was pleasant.  Still in my easy gear, I reigned myself in; I wanted to enjoy that last section of single track.  Back on autopilot, I enjoyed the trail even more, as it was dry on the ridges.  The descent down through the creeks was a little sketchy, what with the mud and deep water, the deepest I have seen them.  On the final double track climb, I could see the possibility of besting my 2020 time.

As I hit the final stretch, I turned off autopilot and put it in Goggins mode.  As some of you might know, David Goggins is an retired Navy SEAL and now an accomplished endurance athlete, who is able to push limits like no other.  I embrace his 40% rule. I rode that last bit like a woman on fire!  I commended the two "kids" I passed while pushing up the Wall.  One, who was doing the 17 miler in a full face helmet and pushing a bike that was at least 75% of his weight.  He/she was probably only 10 years old.  The other, was the young girl who had passed me earlier in the first single track.  Her name was Brianna and she was only 15!  Very inspiring.  I gave her a few words of wisdom as I passed by.  Those kids inspired me to go all out on the last 4 miles.  My HR soared as I crushed the climbs, either by wheel or foot.  I had eagle-like focus on the descents and rode right up to my limits on them.  As I approached the rock garden where the bullhorn was, the lady behind it said it looked like I had done this before.  To which I replied, "Only a few hundred times!"  I cleaned the last rocky uphill between the two rock slabs, which has always been a 50/50 for me.  And rode the tower and paved descent like a rocket.

I came through the finish line at 4:03, 7 minutes faster than 2020.  Gave myself a big pat on the back and then joined in on the comradery with my friends at the finish.  Melissa had a good day as well ... and she was still my friend afterwards!

While I may never again finish with a sub 4 on the 34, that doesn't mean I will quit trying. The only excuse I have now for not doing this race is death itself.  If I have to run that mental gauntlet every year, I will!

Thank you to everyone who made this race happen!  Crazy that 250 + people were fired up this early in yet aother difficult Covid year to do a very difficult race. The stoke for an amazing 2021 is on! 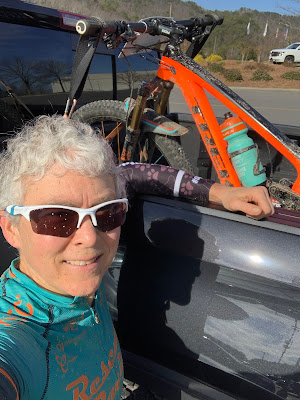