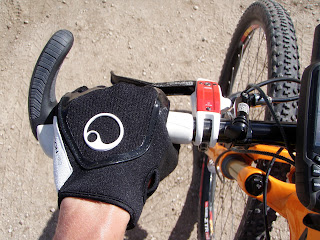 I have been wearing the Ergon full fingered HA2 gloves for about 2 months now.   They have 2 races (SSAZ and Taco Stand Classic) and multiple training rides in them.  They have been washed and dried at least 4 times.

The fit is spot on.  I wear a men's Medium in Specialized and Pearl Izumi.  The medium fit me perfectly. There was just enough wiggle room in the tips that when I flexed my fingers the tips of the gloves were not jammed up against my finger nails. The seams are so minimal and smooth that I can not feel them.  Even after multiple washings/dryings they did not shrink.

There is just enough ulnar padding to keep my nerves happy, yet it does not take away from my bike's feel.  I love the seam-free cuff ... there is no constriction.

I have worn these gloves in temperatures ranging from 45-70 degrees in dry conditions. Even though I have Reynaud's disease, my fingers stayed comfortably warm.

During racing, I never even thought twice about my gloves.  It felt like I was wearing nothing at all.  The last thing you want to happen during a race is to have a nagging issue with your equipment, i.e. pebble in your shoe, migrating chamois, noisy suspension.

This grip/glove combo has worked well for me.  It has made the bar an extension of my arms/hands. The longest period of time I have worn them is 6 hours and my hands were "happy" the whole time.

I would highly recommend them to anyone who likes a "minimalist" glove.
Posted by Carey Lowery at 4:50 PM 2 comments:
Email ThisBlogThis!Share to TwitterShare to FacebookShare to Pinterest
Labels: Ergon, product review

This was the first of 6 races of the Chainbuster 9/6 Hour Series.  This is a "new to me" series that I am planning on doing as tune ups for my other adventures.  I chose to race the 6 hour on my single speed in the women's class.  9 hours would be just too much fun for me!


Even though this race was low-key, I was still a bundle of nervous energy, ready to go like a greyhound!  It was a mass start, not a LeMans style ... which I absolutely loved, as I am NOT a runner.


Lap 1 was your typical bottleneck.  I have learned through the years to use this lap as my warm up.  There is no sense in getting frustrated as this leads to wasted energy.  It does get quite interesting when the train of geared racers in front of me slowly spin their way up the short, grunty climbs.  Good slow cadence, track-standing practice on a SS!

Lap 2 thinned out and I was able to put in in overdrive ... until I got stuck behind a gentleman who did not want to yield to a fast chick.  Oh well, karma was with me because he and several others went the wrong way!  For a moment, I thought about not telling them of their mistake, but then did the right thing.

Lap 3 was pretty uneventful.  I spent some time riding behind Charles, until he kindly showed me just how slippery the pine needles could be.  A soft crash followed by him quickly moving off the trail so I could not use him for traction.  A super strong kid!

Lap 4  started with a Red Bull shot and a trip to the porta john.  As I pulled up to pee, there was a line of one.  He pointed out that they were out of toilet paper.  To which I replied, "Who needs that?"  I hopped in one and hopped back out ... in record time!  That load lightener made the lap so much more pleasurable!  I usually don't have to pee during a race, so kinda unusual for me.

Lap 5 I was paid the best complement ever.  I was behind a Sorella racer.  I asked to pass her, but only when she was ready and there was room.  (We were on some "snaky" downhill single track.)  I could see she was wanting to find a place to pull over, but I told her, she was racing, too.  She had as much right to the trail as I.  When I was finally able to get around her, I heard her say,  "Oh,  that's Carey Lowery!  Go, Carey, go!"  (In a very admirable tone!)  That REALLY made me feel good!

Lap 6 was spent riding behind Drake, the SS leader of the 9 hour race.  Even though he was just a pup at 20 years of age, he rode like a veteran.  Very smooth and consistent.  I enjoyed the lap chitty chatting with him.

Lap 7 I was definitely slowing down.  I had plenty of time to get it in before the 4 pm cut off.  But then Brian called me out on the second big climb.  I was just starting this agonizing hiccup in the course profile, full of roots, switchbacks, and steep pitches when I heard Brian yell, "I am gonna catch you, Carey Lowery!" Game on, big boy!  I immediately entered the pain cave, hoping that the cramp monster would not attack.  He was on a SS, too.  The whole time up that climb he was growling and groaning, but he did not catch me on the climb.  It took him about 5 minutes before he finally latched on.  But then, instead of passing me and leaving me in his dust, he continued to push me through this final lap.  That was HUGE motivation for me.  Thanks, Brian!

7 laps (56 miles) in 5:41 earned me a trip to the top of the podium.  For that I received an Invigo mattress topper.  That was ironic!  It was just last week that I threw away our previous mattress topper which had seen better days.  I also received a schwag bag which had lots of goodies, including a Maxxis 26" tire.  Ummm, the majority of bikes I see today at races are 29'rs.  Time to rethink what goes in podium bags?

Kenny put on a great event!  I am glad I decided to race this series this year.  Very low key and family oriented.  People were all very friendly and supportive.  The volunteers and neutral mechanic support were awesome.

My only recommendation would be that the course be completely marked by 12 pm the day before.  When I pre-rode on Friday around 2 pm, I had trouble at several intersections and missed some sections.  Not a huge problem, though, as I had that first lap on race day to dial the course in.  I just heard some frustrations from 2 other riders on Friday.