Fueling pre-race was the hard part.  Normally, it involves just one meal.  But today I had to come up with two meals.  I had the bright idea of trying to make gluten-free biscuits to go with my eggs.  It was like a cross between a rice cake and a hockey puck.  And that lead weight sat in my stomach for hours ...  I attempted to take in a few more calories around noon, but my stomach was not happy.

The temperature hovered right around 90 at the start.  The course was technically demanding, with short, grunty climbs, roots galore, rocks that moved with you, and stutter bumps everywhere from the super dry conditions the past month.

The race started out LeMans  style, with a 1/4 mile run to your bike.  Coach's orders were to ride at 90% and NOT race the boys.  However, I intended to run hard so as to avoid as much of the 1st lap cluster as possible.


The race went off at 3 pm and as I was running up the gravel parking lot, I looked down and saw a bike shoe all by its lonesome.  Within seconds, the owner was trying to run against 200 race-hungry individuals to claim his lost "sole."  It was quite a push and shove match to get to your bike first.  I am just glad that she was in one piece when I arrived to leap upon her and be off on my 6 hour adventure.

I chose to summarize each lap in a few sentences.

Lap 1:  Really, not even a mile in to this thing and I am down with a bloodied forearm.  So much for avoiding the cluster.  Come on people, just "ride that thang!"

Lap 2:  Welcome back, my friend Momentum.

Lap 4: I think there are more people laying trail side with cramping issues than are racing.

Lap 6:  A 100 lumen light might work well on the TNGA, but it does NOT work well on a tight, twisty single track race.  Oh, well, I will consider this my parade lap.


I ended up 1st woman, 1st SS, and 2nd solo overall.  And I adhered to Coach's orders.  I swear, I was not racing the boys ... they just seemed to keep getting in my way, so I had to pass.  I had a great day on my single speed.  The legs were happy all day, but my lower back and balls of my feet weren't.  The course was very jarring!  I was happy to be finished.  It was nice to be able to get cleaned up at night and not worry about sweating again.

The bike rode well and had no issues:  powerful, yet quiet.  Even with a slightly longer wheelbase than my Specialized SS, I had no issues maneuvering around the switchbacks and other tight twisty sections of the trail.  Now that I have the fork dialed in, I am quite happy with the Reba.

Lisa Randall (Mountain Goat Adventures), her husband Chris, SORBA Woodstock, and the Bike Patrol executed a perfect race.  Inexpensive fees, combined with lots of shwag (pre and post-race), and quick reporting of results made for an awesome race. 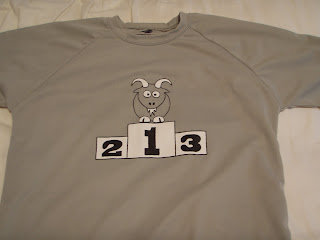 Zeke also rocked it!  3rd place in the SS field.  He spanked some guys half his age!
Posted by Carey Lowery at 5:40 PM 1 comment:
Email ThisBlogThis!Share to TwitterShare to FacebookShare to Pinterest


Wow!  It has been a long, but fun season!  I think the racing was the easy part.  All the prep work leading up to each race was a race in of itself ... especially when you have an 8 year old in tow.  But I had help from family and friends and I do believe it has drawn Carly and I closer to each other.  Yeah, there were times when we fought like sisters, but there were many more times when we hugged and laughed and gave each other high 5's.


Fontana Village was the perfect place to have the finale.  Probably because they had an AWESOME pool with an attached lazy river.  Over the course of three days, Carly got in 10+ hours of pool time and countless laps on the lazy river.


The kids course was also the short track course.  It was located between the restaurant and the pool on a grassy hillside.  It included a steep downhill, which Carly bombed down ... but it also had a nasty gravelly-grassy climb, which Carly hated.  This steep little grunt was also part of my course, which I had to climb up on each lap.  No fun for a little girl with a heavy bike.

Carly had to do 3 laps.  She led on the first, but then lost her bearings and slowed down, allowing a couple of her competitors to pass.  She pushed the climb up to the Start/Finish line.  By the end of the second lap, I could tell she was done.  Grimacing through the 3rd lap, she persevered and finished.  I was proud of her efforts.  This was definitely one of the hardest and least fun of the series, but she finished strong.


Carly's biggest issue is the heat and humidity.  You see, along with the orange hair and fair skin, she also got Grandmom Sandy's heat intolerance.  Heat rashes, flushed cheeks, light headedness, yucky stomach ... you name it, when Carly gets hot, this is what happens.  Even though she raced at 8:30 am, the sticky heat has been there.  Carly can swim all day, but mountain biking is hard for her in the summer.

I, on the other hand, relish the heat.  It is actually to my advantage.  But one thing I have discovered this year is that is has slowed my recovery.

My course was hard.  Not as technically difficult as Monte Sano, but there was a lot more climbing.  Most of the climbing was on pavement or gravel.  The first big descent was steep with lots of loose "baby-heads."  It was easy to get hurt here.  The second descent on Turkey Pen was way more fun.  Smooth and fast with a few water bars that you could get more air than you wanted to.  I opted to run gears as I was coming off a big block of training which had included a 28 hour ride through the Chattahoochee National Forest on "The Yak."


The course started out with a 0.4 mile lung/leg busting climb up pavement to the single track.  I got a good start and entered the single track in 3rd, hanging on tightly to Anina's wheel.  Kim was just in front of us, but slowly pulling away.  I settled into a sustainable pace for me.  On the first lap, I surged ahead of Anina a couple times, just to see what she had.  She did not waiver and stayed up front.

Coming through the Start/Finish area, a couple spectators said that we were 35 seconds behind Kim.  I followed Anina back up that steep paved climb, but could tell that she was faltering a bit.  She entered the single track first, but after about a mile, I could tell she was slowing.  Thinking that maybe she was playing team tactics and not wanting to drag me up to Kim, I passed and upped the pace a bit.  Anina was right there behind me.  But when we began climbing back out of Lewellyn Cove, she popped.  (Anina had raced the short track the night before ... and won.)

The second lap hurt more than the first but I had managed to gain a little more time back on Kim.  On the third lap, I went hard early, hoping that I might be able to reel Kim in, but by the time I began the false flat climb to the Lewellyn "descent of death," I blew up.  I came to the realization that pushing on was only going to increase the probability of something catastrophic happening, I backed off and finished the lap more conservatively.

I am not sure what adventures Carly and I will have next year.  I wanted to expose her to a "real" sport; hopefully she will one day want to pedal all day.  But I will not force her.  Whatever endeavors we take up, we both hope that Daddy can be more of a part of them.  Such a busy man working for Ducks Unlimited, his hard work is what allowed us to partake in such an enriching activity.