The Southern contingent (myself, Ursula, and Lisa) arrived in Pennsylania the week before to dial the course in.  We drug Jay, Ursula's husband, along to be our mechanic and mule.  The first couple days it rained so it upped the technical factor.  The latter half of the week the sun came out, the course dried, and conditions were perfect!


The course is THE most technical XC course I have ever ridden.  There are more rocks and roots than dirt.  Absolute focus is required the whole way; no thinking about what's for dinner, who your competition is, or what the weather forecast for tomorrow will be.  Bear Creek is to rocks as a Great White shark is to teeth.  Lisa called it "Gnarlandia."


Race day brought cool, dry temperatures and sunny skies.  Game time was 11am, so no rush in the morning.  The bike was ready and I was ready to defend my title.  This year the competition was tougher, what with Vicki Barclay (Stan's No Tubes) and Nikki Thiemann (Rare Disease Cycling) toeing the line.  Both are from Pennsylvania (well, Vicki via Scotland) and are quite at home in the rocks.

As I began my warm up, I knew immediately that my legs were not going to have that "spark" that they had last year.  They felt flat and inside I panicked a little.  I did a nice gradual warm up for 45 minutes, hoping that they would come around.  A little life flowed into them, but not the "roadrunner spin" I so desired.  Perhaps the adrenalin rush of a National Championship race would put some spark into them at the start.


When the whistle blew, I had a perfect start, clipping in on the first pedal stroke (yea for small victories).  As we turned the corner and headed up the 15% grassy ski slope grade, I thought I was going to die right there.  The legs were calling for a mutiny while the mind was yelling, "Pedal faster!"  Vicki, Nikki, and Melissa passed me like I was standing still.  Angrily, I charged back up to Melissa's wheel and held on into the single track climb.

I think Melissa was pushing a pretty big gear as she began to slow on the climb and then even more once we hit the first section of rocks.  I watched as Vicki and Nikki began to pull away.  With no where to pass, I had to wait for what seemed like an eternity but was probably closer to 30 seconds.

After passing Melissa, I rallied a charge.  After a few minutes, I could catch glimpses of Vicki and Nikki ahead.  The first half of the course is where 85% of the climbing is.  It felt like I was running a gear 2 cogs bigger ... not good.  But I was not going to go down without a fight.  I slowly began to reel Nikki in and soon I was almost on her wheel.  At times I could still catch glimpses of Vicki far ahead.

And then we both hit "age group" traffic.  You see, in the cross country scene, single speeders get "singled" out ... to the rear of all the gearheads in the category.  I suppose "they" think we are slower than those with gears.  The age groupies are in 5 year increments, i.e. 19-24, 25-29, on up to 45-49, and there are 2 minutes in between their respective starts.

This course has very few areas to pass, unlike the xc courses at home, where, if the trail is not wide enough, you can just "create" a line off the trail in the leaves to pass.  At Bear Creek, off the trail is nothing but large rocks and boulders.  Unless you can run faster than the one you are trying to pass is riding and assume the risk of a twisted ankle, you stay on their wheel until they "bumble" or the trail widens.

And so 12 minutes into the race, the match burning began.  Fortunately most racers were very nice and yielded ever so slightly so that Nikki and I could get around.  At the tricky descent leading to an off camber uphill bridge that was about 14" wide, Nikki got bogged down by a slower racer and had to get off her bike.  I was able to motor around the traffic and take the lead.  Nikki hopped back on my wheel and together we made our way to the heckle pit.

The heckle pit is where the most technical portion of the course was.  We could hear the roar of the hecklers about a 1/4 mile before we entered.  It was wall to wall people, yelling, screaming, sirens, bull horns, chainsaws buzzing.

There was an age groupie just in front of us going way to slow down the drops.  I just about bit it trying to stay off her wheel.  It was pretty frustrating, but finally, with a heckling-induced flow of adrenaline, I was able to take a "new to me" line and pass her on one of the most difficult sections of the course (yea to my second small victory).

With that vote of confidence, I was able to clean the remainder of the descending switchbacks in record time and put a gap on Nikki.  This put a little fire into my legs and the last 2 miles of the first lap, I felt good.  The trail was technical but mostly flat here.

Coming through the Start/Finish area, I grabbed a bottle from Jay; he said the gap to Vicki was 45 seconds.  I wish I could say that with renewed energy I smoked the climb, but I had nothing.  I slogged my way up the arduous climb.  As I crested the hill, I looked down to the Start area and did not see Nikki.  This time up, the adrenaline had left, and boy did I have a nice little sufferfest all the way up.  I passed probably another 10-15 age groupies here.  The matchbook was now empty.

Just before a particular nasty uphill rock garden, Nikki blew by me.  The trail had opened up just a bit and she made a very strategic pass.  She was motoring and was able to put 2 ladies between me and her before the trail squeezed down again.  She came out of nowhere!  I had an, "Oh, shit!" moment, but at the same time I was thinking, "Damn, that was an awesome pass!"

I tried to respond, but the tank was empty.  I was able to get up to the 2 racers she had passed, but they would not yield.  I ended up having to run around one and wait for the second to bumble before I could get around her.  But by this time, Nikki was 50 yards up the trail.


I was slowly reeling Nikki back in on the uber techy rock gardens.  Every time I would get close enough to latch on, I would run into traffic. Of course, Nikki had to deal with this traffic, too, but it just seemed that her passing opportunities were in much more favorable conditions.  So I would have to wait for this to happen:

With 500 meters to go, Nikki was in my sights.  I could see her, hear her, smell her.  I was closing the gap, but would it be fast enough before the trail opened up onto the gravel double track? 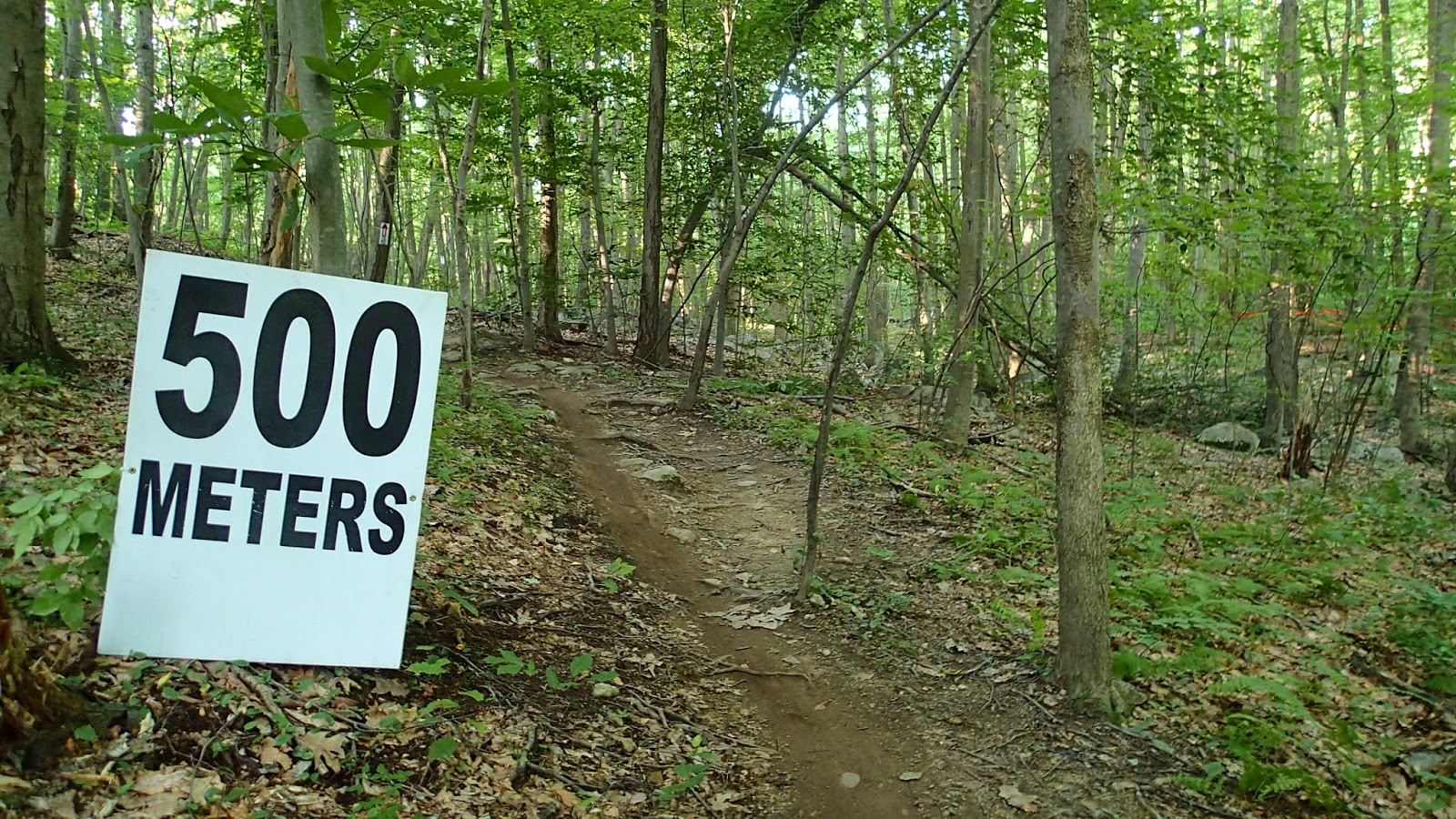 She was riding like a scalded dog; I did not have the legs to close the gap.  Once she exited the woods, she turned on the afterburners and was gone.  I limped in 14 seconds later, totally spent!
Vicki, "the sweet hammer," hammered us by 2 minutes for the W.


I wish I could say I was happy with the bronze.  But no one trains to come in third.  At this level of competition, you have to have a perfect race.  I am disappointed with my performance (or lack thereof), but sometimes you learn the most when you have a bad day.  I will come away from this experience with fiery determination and fortitiude!

My Industry 9 wheels were spectacular on the gnar.  I love instant engagement!

Shanna Powell and Endless Bike Company is an amazing sponsor.  She overnighted me a cog while I was up there!

Lisa captured the silver in her class.

Ursula captured the bronze in her class. It is worth noting that 1st and 2nd were the 2013 National Champions in their respective age categories.

Melissa Sieb, only 17 years old, and after having only started single speeding 2 weeks ago, came in 5th place.  Gonna have to watch out for her! 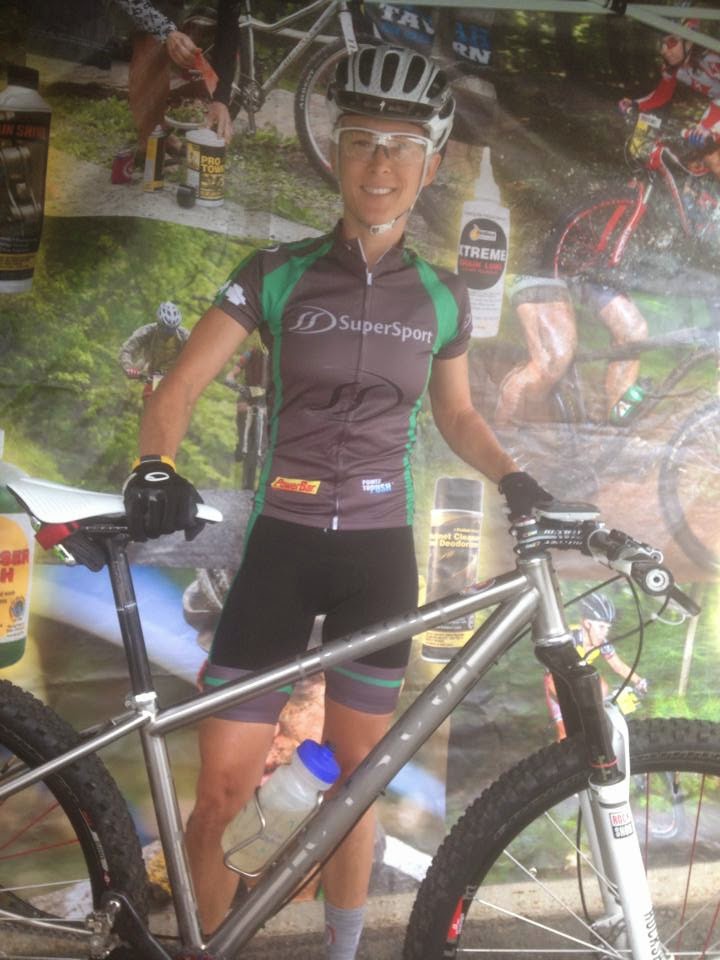