Last weekend was the 2nd annual Kentucky Gravel Championship.  I won it last year and was happy to be putting on a number plate amidst this Covid pandemic and defend my crown.  It is a grassroots level event but don't let that fool you into a complacent course of smooth gravel and gentle climbs.  This course is a mighty little beast with 64 miles and 6000 feet of climbing.  Although it had 22 miles of pavement and 24 miles of smooth-ish gravel, the remainder was made up of chunky ORV trail and the infamous Horse Lick section, where if you fell into one of the hundreds of mud holes, you might be found ... eventually ... by archeologists!

This weekends turn out was light, with 48 racers toeing the line.  I am not sure how many were scared away by Covid, or the course itself.  There was a shorter 32 mile version that allowed some fresh faces to give this gravel racing a try.  I was able to coax my team mate, David, out of Ohio, to come join in the fray.

There was no problem with social distancing, as I camped out at the venue, and brought all my food with me.  I chose my Niner Air 9 RDO with 1.95 Specialized Renegade tires.  This course had just enough "enhancements" that I knew I would be faster on my mountain bike.  A lower gear would also be nice on some of the steeper climbs.

There was some pre-race excitement the morning of the race. Around 6 am as I entered the women's side of the restroom, I heard some moaning/groaning coming from the men's side.  At first it sounded like an animal, but then I thought it was just a dude having some pooping issues.  About 30 minutes later, a Sheriff's car and an ambulance arrive.  Apparently the dude had passed out in the restroom and was drunk off his ass!

The race was a time trial format.  Groups of 5 went off every minute.  I was in the very first wave.  I knew nothing of my competition, other than they looked like legit gravel goddesses ... all of them.  I was going to have to stay on the gas ALL day.  I prefer to be the chaser, not the chasee.  Fortunately I had some strong guys that I hoped to be able to work with for as long as possible.  The first 5 miles was pavement and being able to draft would be of great benefit.  Jordan was in my group; I had first met him at the War Daddy last year and we developed a good racing relationship there and in subsequent Kentucky events.  He was on gears this time (he is a single speeder at heart), as he had broken a rib at the last BoonDoggle event.  He either heals fast or has a good poker face because he started out at a comfortably hard pace.

Our group was making great time on the pavement.  Rodney was single speeding and would pull on the climbs and Joe would take it on the flats.  I was just hanging on and watching my heart rate soar!  I knew I could not race this pace all day, but I at least needed to hang on until the first gravel section.  Just before turning onto the gravel, the arrows were sprayed on the pavement, indicating a right turn.  But there was also a freshly mown 4 foot wide section of a field that also was on the right.  Both Joe and Rodney turned right onto the grass.  Which got me all sorts of confused!  I knew that was NOT right, but my dumb ass brain made me stop and second guess myself.

Fortunately Mr. Kentucky himself, Brian Schworm, and his group were barreling down on us lemmings and reassured us that indeed the gravel was the way to go.  Probably cost me 15 seconds but felt like an eternity. I entered Schworm et al's wake and they sucked me into their draft down the sketchy descent.  I was bombarded by flying gravel and yard-sailing water bottles!

The Hwy 290 climb was not as bad as I remembered and soon enough I was pumping the rollers over to Indian Ridge. This descent was the first bit of gnar:  a washed out double track with embedded slabs of rock and a couple mud holes.  I opted to slow down just a bit and ride up and around them; poor Jordan thought they weren't that deep and plowed through them, but was handicapped with about a pound of mud coating his bike and backside.

After the descent, another 3 miles on pavement took me over to the S-Tree area, which started off with a nice 2 mile gravel climb.  I slowly reeled Jordan and Rodney back in.  Together we rolled along Carpenter ridge, taking turns at the front.  This section was hard packed and smooth.  I thought we were moving pretty fast, until a dude on a gravel bike blew past us at Mach 1.  Holy Hell!  I guess he did not want us latching on.  I knew he could not keep that kind of power up and would eventually see him again.  And sure enough, on the 1/2 mile steep gnarly descent (the one I had made the move on Mary last year when we rode it in the opposite direction) his skinny tire drop bar bike was no match for our mountain bikes.

After bombing down that descent, the next intersection is where the course overlapped, as we were to climb Raccoon Creek Road twice.  It was just a little confusing at this intersection, mainly because even though my Garmin showed the "breadcrumb" trail, it  was telling me that I was "off course" and to make a U-turn.  This happened about 8 times throughout the day.  Fortunately I had done my homework and was 88% sure I was going the right way. This climb was 2.5 miles at a nice grade where I could keep a steady pace.

I opted not to stop at Aid 1 at the top (mile 25) as my drop bag was at the next aid station.  I figured that Jordan and Rodney would eventually catch back up to me, especially on the Tussey descent.  Rodney caught back up and together we headed out on the 5 mile paved section.  Our little pacing party was quickly broken up by Eli Orth, as he passed us spinning a 120+ cadence.  We were able to latch on and then hang on for dear life.

Unfortunately my "free ride" ended at Aid 2 where I stopped and swapped bottles.  Eli and Rodney motored on. No big deal as the next 3.5 miles was negotiating the 100+ mud holes of Horse Lick.  It was a little bit drier than last year which made it easier to pick the right line.

What Horse Lick didn't take out of me, the subsequent Daugherty Wall climb did did its best to deal a death blow.  I was so happy to have a 32 x 50 to slowly spin my way up grades approaching 18%.

Dry Fork School was chunky with loose 2 inch size gravel.  Another enhanced section I was glad to be on my mountain bike.  I was able to recover on the descent and then give'r on the subsequent climb back up to Raccoon Creek Road.  My engine began to sputter halfway up Raccoon.  Part of me wanted to look behind on the straight away and see if any ladies were close.  But that would only show anyone within sight that I was struggling. There was also the fact that if anyone was indeed that close, they would be at least 2-3 minutes ahead of me anyways, since they had started in the 4-6th waves.

I took a couple deep breaths and willed myself to eek out some more power.  Sure enough, I still had some gas in the tank and topped the climb, catching Rodney in the process.  Poor guy was having a bad day with his crank arm falling off.  Knowing there was nothing I could do to help, I apologized for his bad luck and motored on passing Aid 1/Aid 3.  Knowing that there were 14 miles left and 2 more climbs, one of them being back up Indian Ridge, I told myself to just get your ass to the top of Indian Ridge without being caught and you will have it in the bag!

I was humming along on the descent down Lear Road when I hit a patch of briars.  Son of a gun!  A branch managed to catch and stick into my lip.  I actually felt my lip being stretched by the thorns before the branch finally let go and embedding two talons into my lower lip.  Dang!  Upon pulling the thorns out, I tasted blood ... for several minutes.

The Indian Ridge climb was not as horrible as I had envisioned.  At least it was dry and not slippery like last year.  I did my best to TT the rolling gravel back to Hwy 290.  I kept the legs lightly spinning as I zoomed down the pavement descent.  That last gravel climb seemed to go on forever and the stutter bumps just rubbed salt in the wound.  On the last pavement section, I was trying to stand and hammer on the short ups and keep it steady on the flats.  But I had to back off when I felt twinges in my inner thighs.  Uh oh!  Not wanting to cramp myself out of a potential win, I shifted up to an easier gear and spun it on in to the finish.

I rolled through at 4:45.  Now the waiting game began.  I gave it a solid 10 minutes before I was convinced I had defended my title.  A few minutes later Julia rolled in.  I had the W and ended up 9th overall.

David had a solid ride and won the 60+. We enjoyed a good cold river soak while discussing how our day went. 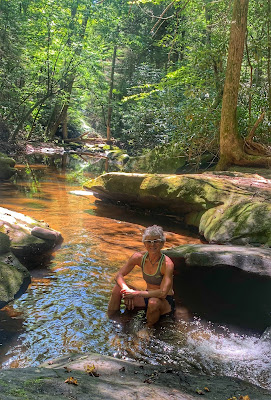 Thank you Keith for persevering through the difficulties of putting this event on, knowing that you would probably be lucky just to break even.  It was just the mental (and physical) boost I needed to keep that competitive fire alive. I am grateful that these smaller grassroots events are able to continue amidst this politically motivated viral reign of terror, stupidity, and chaos. 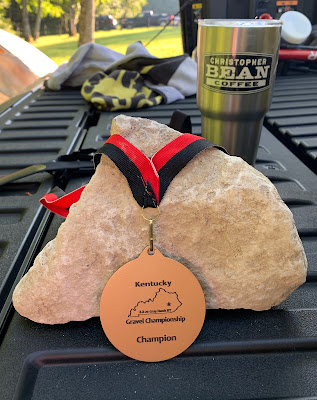