This first time event was organized by the Kalber family and Mark Prater in tribute to Karl who passed away last November.  Karl was the patriarch of the Kalber family and an awesome mountain biker who got a late start to this amazing sport ... it seems he had to beat himself with football, moto's and paragliders first.

It is called the Kaleidoscope because Karl touched everyone he met in a different, yet positive way.  I am sorry I did not get the chance to meet him.  I am sure he was looking down on us and laughing his butt off as we made our way through 50 miles of amazing Virginia countryside.

I knew from past "first" events that I needed to do my home work.  And so I did, studying my National Geographic Maps and the GPS track from the website.  I also pre rode the trails within Hungry Mother State Park to get a feel for its flow.  I also carefully listened to Mark Prater's pre-race meeting where he gave a very complete run down of the course.  I soaked up his directions like a sponge.

There were 25 of us in the 50 miler.  Shortly after 8 am, one of Karl's sons grabbed a pistol and fired it, marking the official start.  Other than one "squirrely" racer who stayed ahead of the pack 50 yards or so, the rest of us started off at a nice casual pace.  My feet were completely numb from the 48 degree start; that was a nicety as I did not have to endure any burning sensation or electrical jolts that my metatarsalgia had been giving me over the past few weeks.

After a delightful 2 mile warm up, the race revved up once we hit the single track.  I managed to enter fourth.  The pace was still quite comfortable for me ... yea! for happy legs.  As the trail came to the boat dock area, I had to re direct the others as they missed a turn.  The signage was there, but hard to see.  There were also no confirmation arrows anywhere!  This was going to be an adventure for sure.  I had to totally focus on the trail and my memory banks.

A group of about 8 of us formed on Mitchell Valley Road.  The countryside was gorgeous as I got a chance to view the area I was racing through.  We stayed together through two farms, dodging fresh piles of cow poo and shoo'ing away a few who were in our way.  We motored on Bear Creek Road.  I took my fair share of pulls as my legs were feeling quite sparkly.

Once we hit the first single track of Crawfish Mountain, the pack quickly broke up and I found myself in the midst of David Cook, Cory Rimmer, and Shawn.  I had the chance to get to know Cory better during this race and he is a most respectable young man.  I have never seen anyone do this before, but when he blew his nose (I was right behind him) he actually used his hand to catch the spray.

This single track was a delight!  Even though it was "flat-ish", there were enough mud bogs, creek crossings and fast flowy sections to give me the giggles.  The four of us popped out onto another double track section.  We zipped by the second aid station and almost beat the "moto-man" to his checkpoint.  No sooner than he had turned his bike off than we came upon him.  Rather surprised, it took him a second to locate his Sharpie and mark our number plates.

From here began the 4 mile hellish ascent up Walker Mountain.  All was good on the smooth fire road, but it soon turned to a soft grassy/leafy double track.  And a lot of sticks thrown in for good measure.  Here is where Cory turned his after burners on and left the 3 of us.  I had to slow up a bit and settle quickly into a sustainable pace.  Shawn slowly pulled away and I hung with David until I got my second wind.  Then I pulled away from him and slowly clawed my way back to Shawn.  At the very top, just when I thought the downhill was near came a really steep, leg-burning pitch.

The 2 1/2 mile descent off Walker Mountain was very similar to Heartbreak Ridge.  However, the first half mile was hard, not only because of its "bouldery" technicality, but it wasn't really a trail.  Just a series of yellow tape stringers leading you through the woods.  It does not get ridden much and therefore had no real footprint.  I spent too much time looking for the next piece of tape and so had a hard time negotiating the rocks.  With a little more work this trail would be friggin' awesome!

Shawn had gotten ahead of me on this section, but I soon found him trail side trying to dig his derailleur out of his wheel.  Ouch!  He did not need anything short of a small miracle, so I motored on, now in second place.  Finally the trail became a lot clearer and I was able to let loose, but still rode conservative as I did not want to follow in Shawn's shoes.

Towards the bottom Shawn caught back up to me.  Indeed a small miracle left him with 3 gear choices.  He was itching to make up lost time, so I let him pass.  I figured as tired as he looked on the Walker Mountain climb, I could catch him on the final 2 mile paved climb up Hwy 316.

I back tracked on some of the Crawfish trail before turning right on some really sweet and fast double track which led to a nice 2 mile descent back to Bear Creek.  Retracing my steps back through the farm land and cow pastures, I some how managed to get on the other side of the fencing and had to throw my bike over a 5 foot high fence and then climb over.  Well, I did not exactly throw my Niner Jet 9 RDO; I gently eased her up and over the woven wire.  That cost me a few precious moments, but better than riding back a 1/4 mile to where I made my mistake.

Finally I hit the backside of the Hungry Mother State Park lake side trail.  I had new found energy as I had stopped at the final aid station and grabbed some Gatorade.  I also had Shawn in my sights again.  The trail had some activity on it as the park was busy with people.  I wove my way through the walkers, runners, and easy-riders.  The state park trails were rippin' fast, but were also loose over hard pack and I had to take the corners with care.

I caught up to Shawn just before the last climb.  He was battling cramps.  I gave him some words of encouragement and then began to climb.  I was feeling strong and thinking I could crack 4:10.  And then a mad Bassett Hound came at me in a full charge.  I was going up the road and he was coming down, with every intention of sinking his teeth into my wheel or calf.  I had to unclip my right foot and kick him in the head to ward him off.  He howled and continued to run down the road.  I clipped back in and then immediately my right leg went in to a full on cramp!  Ow, ow, ow, ow ... I came close to falling over, but managed to gear down to granny and one-legged pedal for a few revolutions.

Although I did not have to stop, I had to slow down to a crawl up that last 1 1/2 miles.  Damn dog! I was never so happy to see the top of that climb.  From there I had a 5 mile descent with 4 small climbs.  That descent was super sketchy.  I need to learn how to drift!  I was fortunately I was able to regain my momentum and finish strong.  I came through the finish in 4:20.

I was wondering why all the spectators had this "aghast" look.  Apparently Cory had gone off course, mis-directed by a state park ranger, and repeated a section of single track.  And so I had finished first overall.  I later joked with Cory that he should not have dropped his "orienteer" on the Walker Mountain climb.


This kaleidoscope tops my list of favorite trophies.  You can oftentimes tell just how much a promoter loves his/her race by the trophy.  This one came all the way from England.

I really enjoyed the course.  It was a delightful mix of trail, double track, fire road, and asphalt.  I could see where the organizers had done a lot of trail work.  I enjoyed hanging out afterwards and getting to know the Kalber family, FB friends, and the mountain bikers of Virginia.  Virginia has a lot to offer my Niner and I.  I will be back for seconds! 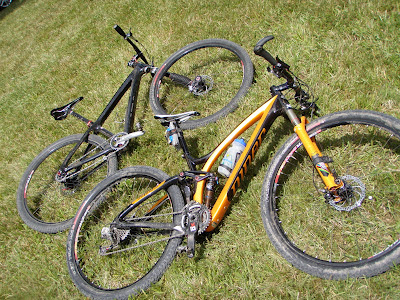