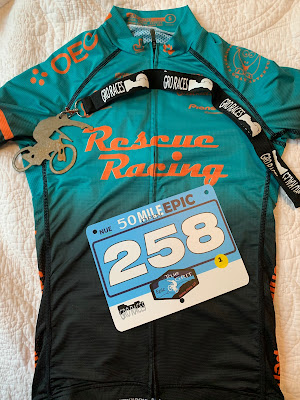 I thought I was in the desert, but WTF!  The rain began Thursday night and did not let up until an hour before the race. Having ridden here in 2011 at Camp Lynda, I knew that this dirt would turn to peanut buttery mud.  I questioned my sanity as I affixed my number plate and prepped for what was going to be a mentally as well as physically challenging day. I put my trust into the race director that she knew what the trails could endure.

Fortunately I have ridden in these conditions before.  Think Dirt, Sweat, and Gears 2008 and LaRuta 2009.  So I went into the local bike shop the day before and picked up a Muc Off Claw Brush, aka mud scraper.


Insider knowledge told me that Green Valley and Cove Wash area would be nasty, but once past that, conditions should improve, unless the rain started again ... 40% chance according to local reports.  Oh, well, I didn't drive 2000 miles to sit on my ass.  And what with all the COVID-19 event cancellations, this might be the last race of the season.

Coach Lynda was at the start to grab some extra clothes I decided to shed at the last minute.  At least the temperature was a comfortable 48 degrees.  I decided to enter the Pro/Open class as opposed to the Master Women's 50+.  The biggest advantage was that we were the first to go off as compared to being sent off in a later wave that would have me possibly having to pass a lot of racers.  And since I was racing the NUE Marathon series, there is no Master's division, only an Open division for the ladies.

The start was 1 1/2 miles of pavement before we hit a steep 1/2 mile climb up to the Cove Wash trails.  Believe me, it was NOT neutral.  I was quickly off the back, but I expected this.  No worries, as I knew this was gonna be a BIG day.  These days I am more the tortoise than the hare.

As soon as we hit the double track access road it was a slippery red muddy mess!  At first it was like the February Snake, with the mud watery enough that it didn't gom up on the bike.  There were a few miles of this and then ...  the mud gumbo, think QuikKrete.  Three pedal strokes was all it took before the wheels stopped turning.  I hopped off, pulled out my scraper, removed what I could, and then picked my bike up and carried it 150 yards of so until the conditions were rideable again.  As I was walking, I grew about 2 inches in height as this mud stuck to my shoes.  I instantly gained 10 pounds and was walking like Frankenstein.


Of course, where the trail was rideable, it was uphill.  I felt like I was dragging a truck tire behind me.  On the next slickety slidy descent, I shed most of the mud that had accumulated on the tires. Focusing on staying upright on the greasy trail,I failed to notice all the racers off their bikes around the next corner, beginning another climb.  I was wheel deep in mud once again.  (FYI, anytime you see light bluish dirt out here, after a rain, avoid at all cost!) This time there were also pebbles and small rocks that gathered on the wheels and began finding all the nooks and crannies of my full suspension Trek to wedge themselves into.  It was at this point, I had a mini meltdown.  I looked back towards town and saw several bail outs.  The monkey began telling me all sorts of more favorable options:  riding the roads, riding the greenway, going for a hike. soaking in a hot tub, filling a grocery cart full of canned goods, toilet paper, and while you are at it, a carton or two of dairy free salted caramel ice cream.

David Jolin came by me as I was throwing my pity party and attempting to lift my bike to carry it up the hill of truth.  He offered some words of encouragement and HAB'd on.

I resolved myself to making it out of this mess and giving Waterfall and Zen a chance to bring me back to my happy place.  Once I was able to remount and ride again, after spending another 5 minutes of so scraping mud off my bike and shoes, I motored up the approach to Waterfall.  There were a cluster of racers just ahead.  I was bound and determined to NOT walk down this double black.  As I was readying myself to go over the edge, I heard a racer dude say (as he dismounted next to me), "It's too wet and slick to ride!"  Hehe, obviously he has never ridden Pisgah, I thought to myself.  And with that, I went over, calling out "rider back," as I weaved in and out of a walkers. In no time, I blew through the final tricky part at the bottom and was on my way over to Zen ... smiling again!   It's on like Donkey Kong! That's what I am talking about!


As I came into the Zen aid station, Coach Lynda was there cheering me on.  She bolstered my spirits even more.  I did not stop, as I thought my nutrition/fluids were good and began the long first climb.  I remembered last year being passed by quite a few racers here, but today I was the one making moves.  Despite the rains, the slickrock was mostly dry and grippy.  There were a few sections where mud being shed from tires accumulated on the rocks, but not enough to make any real difference. I was able to nail all the tricky descents and most of the ascents.  Where I had planned to dismount and walk/run up, I did with ferocity.  I was continuing to reel in one woman after another.  I had no idea where I was in the pecking order, but I was bound and determined to give it all I had and let the chips fall where they may.

Coming out of Zen, the sun had begun to shine!  Hallelujah!  Because the forecast had showed a 40% chance of more rain from 11am - 2pm. I was getting warm so stopped and gave some layers to Coach.  I began the climb up to 3 Fingers; seeing Heidi (who was doing the hundie), I offered some words of encouragement.  I was also very happy NOT to be doing 2 laps.  Stepping over the gate, I began the descent.  I knew I had to go left to avoid the steep drop off the middle finger, but I guess my head was up my a$$.  Before I could stop, scream, or cry for Mommy, I hit that drop!  Thank goodness my body knew what to do and I hit the landing clean.

Bearclaw Poppy Trail was el primo!  Dry, hard packed, and fast!  No signs of the rain deluge the day before.  Three miles of pump track with lots of line options (along with cleaning the Waterfall and finding Zen on Zen) made up for that first 10 miles of misery ... err, adversity.

But then, Stucki Trail. And I was out of water. Six miles of climbing up to Amen Corner.  It's an easy climb, nothing technical, and fortunately no head wind.  But ... 6 miles of just trying to put myself into TT mode after 3 hours of intensity, the body was saying no.  The bike was, too.  Blaze sounded horrible, like she was dying.  The mud had sucked out every bit of lube on the chain and the noises that were emanating from her were almost comical.  I knew I was losing precious watts just moving that chain through the derailleur pulleys.

And then I ran out of water.  Just get to the Corner.  There was a trail angel there last year who had water.  I desperately hoped he had some lube as well.  I saw two racers off in the distance.  One had a pink kit, one had a ponytail.  Could it be two women?  That gave me the motivation to press on, even though my quads were screaming.  Slowly I reeled them in over the next few miles and then passed them, making sure I did so on a little downhill. I did not want to have them latch on, especially knowing I was going to have to stop soon.

Climbing up to Amen Corner, I saw my angel.  I breathed a sigh of relief, as this is not a designated aid station, but a local who gives up his day to help us racers.  He helped to refill my CamelBak and then quell the banshee in my chain.

Both ladies had gotten ahead of me again, but not by much.  With big tailwind and a lubed chain, it felt like I was on a e-bike all the way back to Rim Rock.  I managed to pass back the two women.  I caught another woman on the climb up Rim Reaper.  I followed her along Rim Rambler and then passed her just before hopping back over the gate.  Down Rim Rock, the caffeinated gel I took 30 minutes ago breathed some life back into my legs.  I was beginning to smell the barn, what with 8 miles to go.  I flew up the tricky Cove Wash climb and entered Barrel Roll determined to leave it all out there.

Barrel Roll was in perfect shape!  The off camber climb was not as intimidating as before.  On the drop into the saddle section, I remembered to stay left, skirting along the cliff edge, and rolling the rock drop.  I made the first tricky ascent, wisely dismounted at the knuckle-breaker rock, ran up the chute, and then remounted.

Once I rolled the cattle guard, there were about 4 miles to go, mostly downhill.  That was when my gas tank light came on.  Running low on fuel, but high on spirits, I cautiously rallied the final miles.  I did NOT want to flat now.  Even though this section was fast, it was by no means buttery smooth.  Lots of rocks to maneuver through or over and many had sharp edges.  Lo and behold, about half way through this section, I saw my competition fixing a flat.  Not how I like to gain a position, but after asking if she needed anything, I motored on.

On the final single track descent, my triceps attempted to raise the white flag.  This course was so upper body demanding and my arms finally went from al dente to overcooked.  I finished up the descent and put my head down for the final pavement push to the finish line.  I rolled across the finish line in 5:13.  What a ride and what a day! 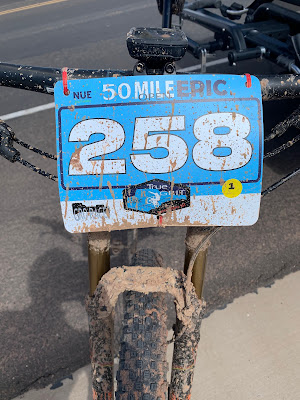 Unfortunately Cimarron got a lot of hate "mail" with her decision to let the race go on, from a trail destroying aspect.  First and foremost, the muddy miles were on ATV double track and the single track section was freshly cut to work around housing construction. This rutted out trail will eventually be in someone's basement soon as the development continues to expand over the next few months.  So no damage was done.

I am so glad I persevered through the mud, because the rest of the course was AMAZE-BALLS!  This year has definitely started out #doinghardthings.  I have had to push through some mentally challenging conditions.  Glad to represent Rescue Racing and Scott's Bikes with grit, gristle, and gumption.

Now on to the next adventure, as racing has been temporarily suspended due to COVID-19.
Posted by Carey Lowery at 9:16 AM No comments:
Email ThisBlogThis!Share to TwitterShare to FacebookShare to Pinterest
Labels: NUE series, Rescue Racing, True Grit Epic
Newer Posts Older Posts Home
Subscribe to: Posts (Atom)