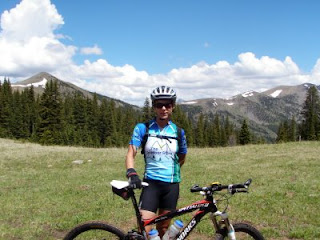 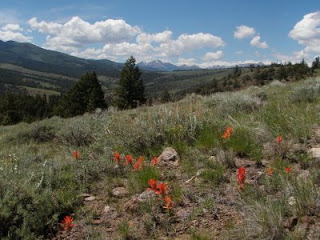 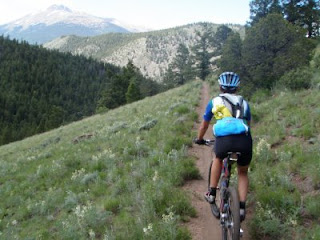 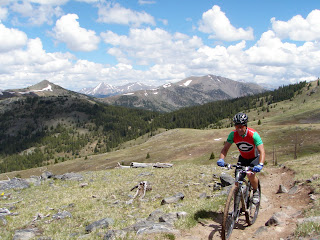 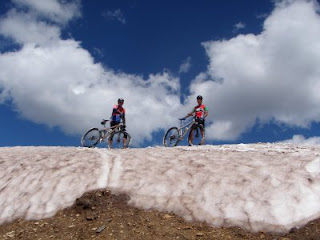 Zeke and I arrived in Salida Friday afternoon. He drove the van and picked me up at the airport. We are staying with Mary Ann and Kent, 2 amazingly interesting people who lead an idyllic life. They are ex-adventure racers, who have travelled all over the world, competing in some of the hardest races, including the Raid Gauloises.
On Saturday morning, we rode the 6 miles of trail that Kent and Mary Ann built on their property ... just a little slice of heaven. I tried out my legs and lungs at 7000 feet and felt pretty good. The only time I felt the altitude was on a sustained climb greater than 1/4 mile.
After lunch, we rode from Kent's house up Bear Creek to Rainbow Trail (ele. 9000ft). It was a 7 mile climb, both gravel road and gnarly doubletrack, to the trailhead. NOW, I was feeling it. I just settled into a good aerobic pace and did not try to push it. I had heard stories of people going too hard too fast, and then falling apart on subsequent days. And I want to ENJOY all my days in Colorado, so I took it easy.
Well, taking it easy came to an abrupt end, once I hit the Rainbow. Oh my God, it was so sweet. It rolled along for 6 miles along a side cut, with a few openings revealing the beauty of the Rockies. The trail varied from smooth and flowy to some fun rocky sections. I felt great breathing in the thin air and my legs were hammering. Much better than I expected. We finished up the day with a screaming descent back down to Kent's house.
On Saturday, Kent took us up to the Monarch Crest Trail. This trail has not been open very long and we were one of the first to ride it in its entirety. Being at 11,500ft, it takes awhile for the snow fields to melt and the trail to become visible. We had to climb over 3 fields, with one having a 10 foot drop. On this one, we had to do a butt slide down. Zeke managed to tear his shorts and had to dig a few rocks out of you know where. Kent, being a gentleman, grabbed me as I slid towards him, and cushioned my landing.
There were so many OMG moments. With the vistas, the wildflowers, and the Aspens, I thought I had died and gone to heaven. My head was swirling, not because of the altitude, but because of the immense beauty. It was sensory overload!
And the trail was to die for! From open and flowy along the Continental Divide to rough and rugged through the pines along the Colorado. The smells of the pine, spruce, and sage were unbelievable. All my senses were engaged. And during the times I stopped to take pictures, it was absolutely quiet! No planes, trains, or automobiles up here.
The trails along the Monarch Crest, Continental, Colorado, Silver Creek, and Rainbow each had their own character. As we slowly descended down from 11,500 to 7,500, I was captivated by the beauty of each ecosystem.
Once again, I was surprised how my body was handling the altitude. I expected it to be a lot rougher. However, along this 36 mile stretch of the Crest I only gained 3000 feet of elevation. So I know that the FC 50 with its 5000 feet of gain per 25 mile lap is going to hurt like a mother. But I did come to realize that I may not be able to go as fast up, but I can still scream down the descents!
Posted by Carey Lowery at 9:15 AM 1 comment:
Email ThisBlogThis!Share to TwitterShare to FacebookShare to Pinterest 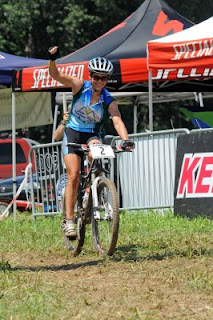 If It's Rockin' Don't Be Knockin' 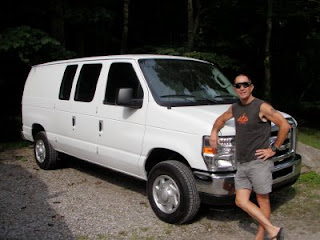 Zeke surprised me this past week with a new vehicle ... and no, it is not the Ford Edge that he was thinking about last summer. It is a bare bones '08 Ford cargo van. He says it is so that we can haul our stuff to Canada for TransRockies. But let me tell you, there is enough room in there for a queen size air mattress. Hmmm....
Or he may have gotten the van just to try to win 1 bet with me. This one was how long does it take to warm up a van from 32 degrees to 50 degrees. We made that bet a long time ago and I have forgotten how many minutes I said. I will say 15 minutes from the time you start the engine.
Anyway, I rode with him down to Raccoon Mountain this past Friday. It will definitely fit all our gear and my parents when we head to British Columbia. But I did not quite feel right riding in it; it was like I was missing something. Oh yeah, I know ... a Pepsi uniform. Or maybe white pants and a white T-shirt, like painters wear!
Posted by Carey Lowery at 5:04 PM 2 comments:
Email ThisBlogThis!Share to TwitterShare to FacebookShare to Pinterest

After back-to-back 40 hour workweeks, I was ready to unleash some stress on the trail. Yeah, 40 hours may not seem like much, but when you are only used to 20 ...

My training plan called for 3-4 hours of race effort this past Friday. Having to motivate yourself at that intensity for that length of time can be quite difficult. Luckily, Dave Holmes' race, the Discburner, was happening Saturday. And Coach gave me the o.k. to race the 6 hour! Game on!

It was a LeMans start. I ran pretty decent and got onto the trail in the front group. The course was fast and flowy, with a few techy spots and a few tight, twisty sections. Climbs were in the 30-60 second range. Considering how tough the last two weeks were on me, I felt really good and was able to push the pace. On one occasion my front tire washed out and I kissed a tree. At that point, I made a conscious effort to back it down a notch. After all, this was just a training race.

I raced with bottles, with was really sweet! I stashed my cooler underneath a tree just before the Start/Finish line and grabbed a bottle each lap. Pit times were just under 10-15 seconds. The first 4 hours I kept it pegged. Temps were in the mid-80's but most of the course was in the trees, so heat was not really a factor. I managed 5 laps in 3:50 minutes. Each lap was 46 minutes and some change. I was happy with my consistency. I felt that I could still have gone hard, but backed off the pace as Coach instructed and just cruised around the course the last two laps.

I came away with the win and an awesome training day. Dave put on a great event and some awesome schwag ... too bad I registered late and missed out on the Mountain Hardware T.

Thanks to my hubby for coming out and cheering me on, too! He had Reese, our 13 year old Lab in tow. Unfortunately (or comically) for Charlie, there were just way too many male dogs around, and Reese ended up peeing on his shoe. Never done that before, but I guess Reese was making sure that everyone knew who his human was.

It was also good to see Eddie and Namrita out there rippin' up the course.

I hope I feel as good at the Cowbell as I did at this race. Could the third time be the charm?
Posted by Carey Lowery at 5:31 PM 2 comments:
Email ThisBlogThis!Share to TwitterShare to FacebookShare to Pinterest
Newer Posts Older Posts Home
Subscribe to: Posts (Atom)