For you scholarly types of mountain bike racers, I have some beta on the Marathon Nationals course.  This past week I took a little trip to Georgia to roll my tires over the 58 mile course.  Aside from what will be on private land, I rode most of what was available.  The course is roughly broken up into three sections with fire roads and asphalt making up connectors to get from one trail system to another.  I am racing in the single speed division so I also wanted to figure out my gearing.

The Bartram Trail is the first trail system to be ridden.  At 18.5 miles, it is the longest of the three. Some of it will be ridden twice, but in the opposite direction. It is flat, fast, and flowy.  It holds up well in the wet, as I experienced first hand.  Most of what was flung up on the bike and eye was not mud but bits of pine straw.  I quickly noticed I was under geared on this trail.

The Keg Trail is 9 miles.  It is mostly flat with just a few grunty climbs of 30-100 yards.  However, it does require 100% focus, what with its tight twists and turns, multiple bridges, and creek crossings. If it is wet, which it was when I rode, you had better make sure to mount your stickiest tires.  What with its hundreds of roots, most of which are angled and off cambered, this trail will make you eat dirt for lunch, if you are not careful.


I also encountered (10 + n) log crossings where  (n = 5 to 10).  For me, half were rideable and the other half I practiced my CX dismount and remount.  If you like old school trail, this one will not disappoint.  Those who run wide bars or bar ends might find this extra exciting.  My gearing here was a little more likeable.  The "right" gear will be the one where you can hammer the flats, but that still allows you to get on top of on the short, but steep climbs.

The trails in Mistletoe State Park which will be utilized are Cliatt Nature Loop and the Rock Dam Trail, 8 miles in length.  Cliatt is wide open, smooth, and easy.  The Rock Dam is a beautiful old school trail that will throw alot at you in just 6 miles.  I was glad to have reconned this, as the beauty that enveloped the trail was astounding.

There are 3 flat rock creek crossings that look so doable.  But ... the algae is everywhere.  My guess is that the coefficient of friction between these rocks and your tire is about 0.03, which is also the same as ICE!  You have been warned.


The climbs on the Rock Dam trail are short, but steep, and always seem to occur after a ditch drop, a creek crossing, basically momentum busters.  Most of my sessioning involved deciding when to run like hell.


There is one fun rocky section about 75 yards long on about 12% grade and 20% off camber.  This was one of a couple techy sections where I did some true sessioning.  As long as I did not look to my right, I was o.k.


After 3 good days of riding, I think I have finally figured out my gearing and tire choice.  This course may be flat, but it is not gonna be easy.  You are going to be on the gas ALL the time!  Glad I like to spin, spin, spin! 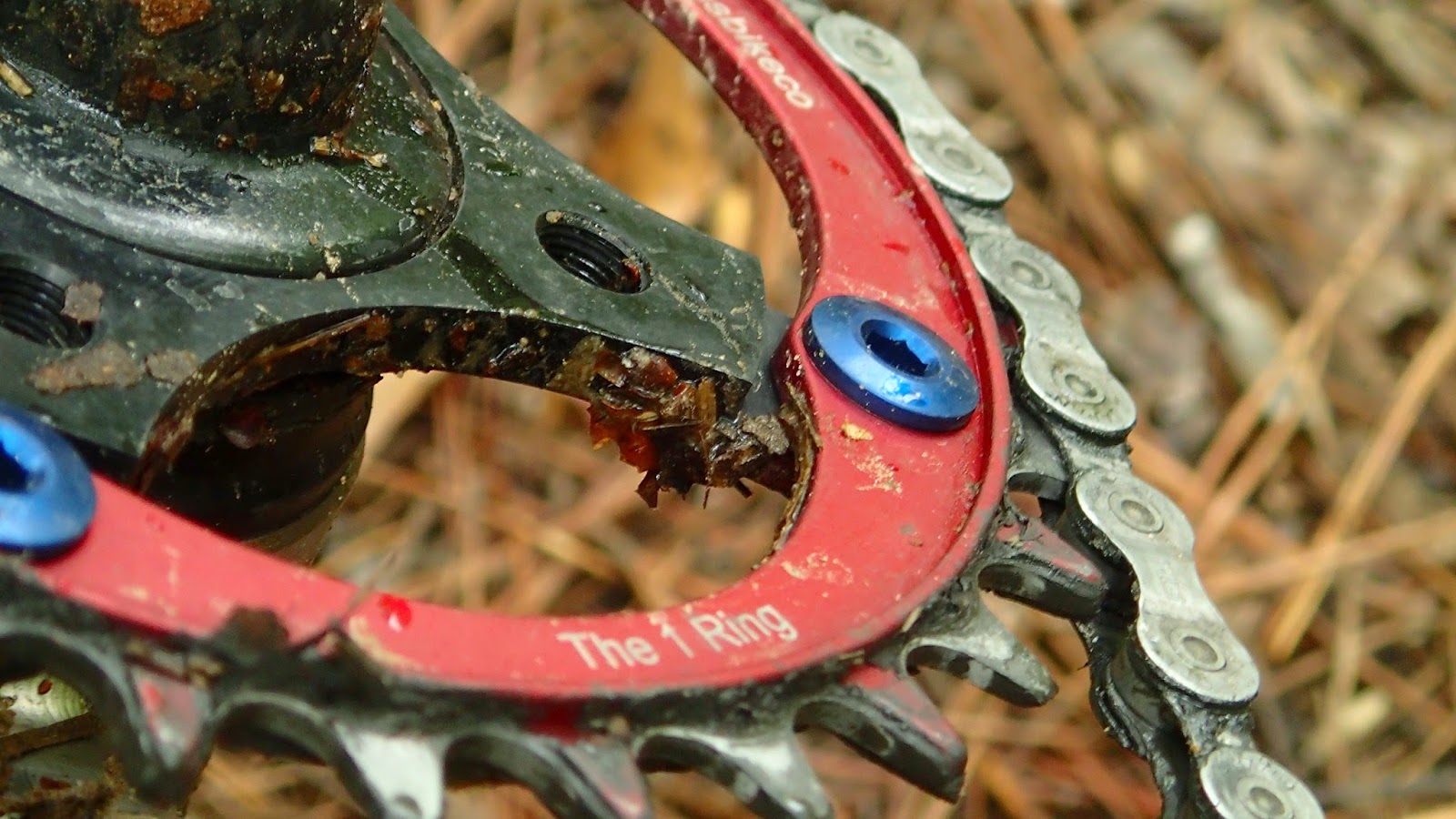 Posted by Carey Lowery at 7:12 PM No comments:
Email ThisBlogThis!Share to TwitterShare to FacebookShare to Pinterest

First race back since the 6 week lay off.  No structured training leading into this one.  I was excited to be back in competition, but nervous that my engine would misfire. I chose an easy gear, knowing I would hate the first lap, but at least be in my comfort zone during the final ones.  A little pre-ride shake out of the legs and nerves the day before and I was ready to see how I would perform come race day.

Each lap was 13.8 miles and 1350 feet of climbing.  So many twists and turns and ups and downs that my Garmin could only handle 11.5 miles and 1100 feet of climbing.  The course was in perfect shape. Many hours of work had gone into making this course race ready.  The weather was cooperating this year; the course was dry and with a nice light rain the night before, the dust had settled.

Although I was initially in the 5th row, late comers funneled in the front, past the "official" start line.  This put me well back in the field.  The start was fast and furious on the initial 3/4 mile parade lap on the pavement through the campground.  I was spinning a cadence of 100+ but still was passed by hordes of racers that are super fast on their geared full squish bikes ... until they hit the single track where their roadie skills did not transition to the dirt.

I knew Lap 1 was going to be a party train.  In year's past, I would blow a few matches to get around racers.  This year, I had decided that I would ride with the train, saving my energy for future laps.  An experiment it was.  I was EXTREMELY patient until I came upon a racer who I swore was drunk.  This guy was on a full suspension with a skateboarder's helmet, flat pedals, and pads.  I don't think he realized he had gears as he was pedaling like a hummingbird.  He was fine on the straightaways but when he came to any sort of turn, he was all over the berm and nearly bit it several times.  I knew I had to get around him before he took me out.  I did and said a prayer of thanks.

My body was functioning well and I was almost into my little bubble of happiness when, trying to pass a racer through a rooty section, my chain came off.  Doh!  Taking way too long too get it back on, guess who passed back by me?  Yep, Mr. Tipsy!  I had to play that game all over again, this time passing him as he was wallowing around in the leaves after having folded his bike in half on a huge berm.

I finally found my bubble on Lap 2.  I came upon Eleanor midway and noticed she was pushing a much harder gear.  We chatted for a bit and then I knew I had to go.  One of these days, I hope to be able to throw on that big gear again.  But for now, I was happy with my dinner plate cog.  Lap 2 was my fastest.

Midway through lap 3 I came upon Mark Stewart.  He was a hurtin' buckaroo as he rode with Lisa the previous lap.  Little did he know that she sometimes likes to play with guys the way a cat plays with a mouse ... just before the kill blow.  I was beginning to feel the fatigue settle in as well.  I chose to stay with Mark and follow his lines, and perhaps learn a little.  Mark is a very skilled rider.  I told him that the highlight of the race for me would be able to see him hit those four jumps at the end of the lap.  I think that this pushed him a little harder, and he nailed the biggest one! 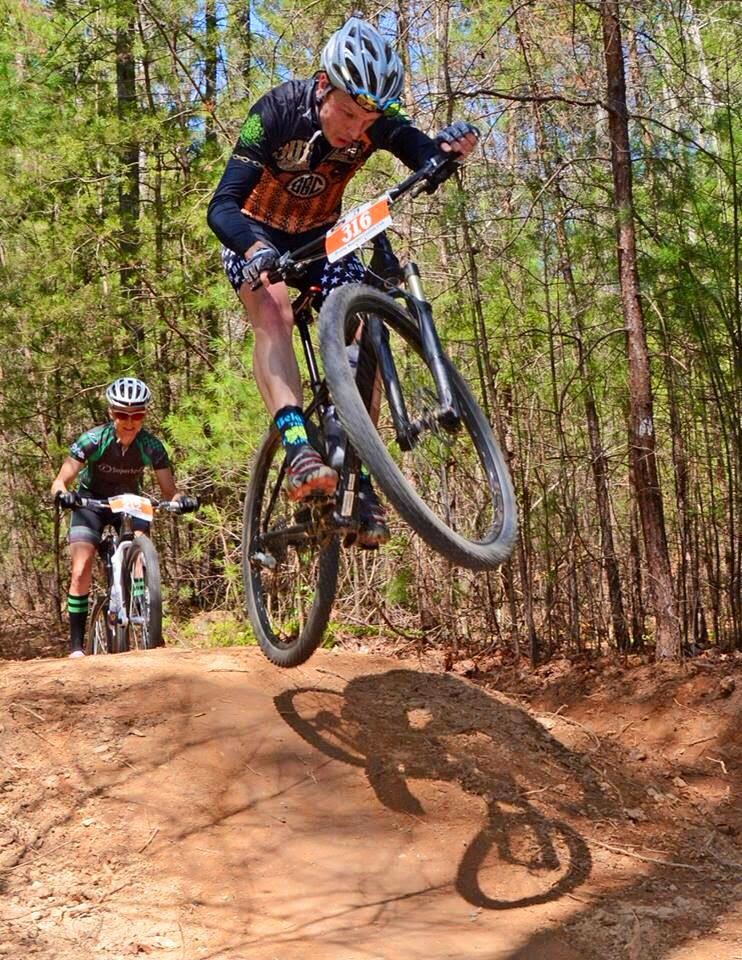 Prior to heading out for lap 4, I chugged a can of Red Bull.  It took about a half lap before I grew wings.  While waiting for my overdrive to kick in, I settled in behind another rider who had a great pace and was super consistent.  This allowed me to turn AutoPilot on and enjoy the ride.  Once I felt the energy return, I made the pass and motored on.  About a mile before the rock gardern, I fell in behind Melissa Cooper who was racing duo.  When I made my presence known, she kicked it into high gear and left me choking on her dust on the climb.  I managed to crawl my way back onto her wheel and then passed her when she bobbled in the beginning of the rocks.  Must have been fate as she rode my line through the tricky portion of the garden and cleaned it for the first time!  I could hear her squeals of gratitude, which in turn made me feel good and bolstered the inner fires.

I went out for my 5th and final lap.  I wasn't sure if it was necessary, but I needed all the miles I could get.  My body was not happy with all the jarring.  With every G-out or set of roots, my left foot sent out electrical waves of pain and it felt like someone was taking a knife and poking it into my lumbar area.  The upper body was holding up well, but the lower was all to hell!  I was ready to be done.

With about 3 miles to go, Gordon Wadsworth and Wes Richards, racing neck in neck in the single speed division, blew around me quickly and effortlessly.  I was "sucked" into their vacuum and for a brief moment, I do believe I entered a time warp.  This last lap was my second fastest, no doubt thanks to those two.

I rolled through the finish line with a first place in the single speed category ... 5 laps in 6:21.  Slower than my last solo performance, but I was happy.  Happy to be back at my passion.  Happy to have my body perform as it should.

Jason knows how to put on a fantastic race with equal payouts, incredible schwag, and a post-race raffle filled with high dollar items.  Winning the single speed division netted me some Benjamins and a Endless Bike Co. musette bag filled with goodness!


Warrior Creek is my all-time favorite 6 hour race.  I will be back in 2016, perhaps mixing it up a little with one of my friends.

If you missed out on this one, check out their fall race, The Wilkesboro 100K.  It uses the Warrior Creek Trails, the Overmountain Victory Trail, and the Dark Mountain Trails.  I raced the inaugural one and highly recommend it.