Race morning was 38 degrees.  Forgetting that a Utah 38 is different than a Tennessee 38, I put on arm/leg warmers.  I was in the Open Women's field, set to go off first at 8:20.  I didn't even know until I checked in the day before that there was a 50+ Master Women's field.  I approached the start line and heard a Scottish accent call out my name.  Coach Lynda!  I hadn't seen her in years.  We talked a bit, helping me to forget about all the heavy hitters in the field and how I was about to be "schooled."  This wasn't an "A" race and with all the riding leading up to today, I knew I was carrying some fatigue into it.  But I also knew I didn't have to prove anything to anyone, other than me.  I had my own personal goals:  have FUN, don't CRASH, MOTIVATE others, and CLEAN the Waterfall.  I also gave myself a time goal: 4:15.


The race started out with a neutral 1 mile roll out through the town of Santa Clara.  Once we turned left and hit the double track, everyone dropped the hammer!  The first couple climbs were a punch to the gut for me and soon I was dangling off the back.  I was cool about it and waited for the legs to come to life.  I also realized that I was overdressed and soon stripped down my arm warmers to my wrists.

The first few miles were fast and a bit muddy through Cove Wash.  I was in the mix of a few ladies and seeing their jerseys, figured they knew the lines, and so was content to ride behind them.  The next section was Green Valley.  This was a serpentine 8 mile section in which I would ride up a rocky wash to the top of the hill and then rip it down double track to the valley floor and hit another climb through another wash.  This seemed to go on forever and you had to make sure you followed the orange tape and signage because it was easy to blow through a turn on the descents.

Climbing up to WaterFall, the gnarliest section of the course, I soon was being passed by the later waves, which included the age group Men categories.  Most played nicely, but some obviously had no clue about the "trail" of their rear wheel.  More than once I had to brake, which made me "Yosemite Sam" it under my breath.

As I approached the feature, there was a woman just ahead who was undecided about riding or walking.  I called out, "rider back," and she quickly got off her bike and moved off the trail. There is a "danger danger" sign warning you just before the approach. Once you pass the sign, you are committed to riding it. As Scott Harper would say, "The pucker factor so high, I almost bit a chunk out of my chamois!" I had studied Thom Parson's video the night before, playing it 7 or so times, trying to visualize the line.  Enter to the left, sweep to the right, over the boulder, roll the drop, back to the left, ker-chunk, ker-chunk, ker-chunk, roll over the drop to the right, fight the urge to go back to the left, hit the last boulder drop, and shoot out the right.  Boom!  I did it!

Pumped about what I had accomplished, I felt re-energized and was rewarded with a flowy, chunky descent down to the Zen loop.  I wanted to just BRAAAAP it down to the aid station, but after seeing 5 riders off the trail with flats so early in the race, I chose to err on the side of caution.

At the aid station, I lost a minute or so fumbling with arm warmer and glove liner removal.  I decided to keep my leg warmers on as slight protection against a potential crash on the rocks of Zen. I didn't have a drop bag here, so I carefully tied everything in a knot and hoped I would see it at the end of the day.

Beginning the climb up Zen, I made mental notes of where I needed to try to conserve, where I needed to dig deep (which was most of it), and where I needed to just get off and run it up.  Zen is my absolute favorite.  Super techy, with punchy ledgey climbs, I was pretty much red-lining it the whole time.  One line I took during the race that I was afraid to during the pre-ride was a short but scary cliffside climb.  I think I kept my right eye closed as I rode this section.  Even the descents worked me over with lots of chunky drops.  But as the trail name states, I was in the moment of bliss.

I rode back through the aid station (you hit this aid going into/coming out of Zen), and began the climb up to Bear Claw Poppy.  This was one of the longer climbs and I tried to stay on top of my nutrition here.

Bear Claw Poppy was a 4 mile descending pump track for XC bikes.  There were alternate lines where you could get some serious air or just stay on the ground and carve the ribbons of dirt.  I chose the latter, although a couple times I got crossed up and flew a little more than I cared to.  It helped that there were two guys ahead of me and my greyhound instincts kicked in.

And THEN the hard right turn onto Stucki Springs.  Although I had not pre ridden this trail, I knew from the profile (800 feet climb in 4 miles) that I was going into the hurt locker.  Fortunately, the typical headwind was not there today.  I also managed to latch onto another woman in my category, which motivated me to push through the pain.  This trail is straight and I could see it all the way to the horizon.  We talked a little: her name was Carri from Park City.  We managed to pass a few guys, but I didn't quite have the legs to pass her.  Somewhere in the last mile, the rubber band broke and she slowly pulled away, although I would continue to see her almost all the way to the finish.

Once I crested the top of Amen Hill, the course veered 90 degrees to the right, which gave me a clear view of the snow capped mountains in the distance.  Talk about a view ... stunning! I was out of water, and there was a trail angel at the top with a water jug.  I pondered for a few seconds about stopping, but didn't want the gap between Carri and I to grow any bigger.  Even though I was way out of a podium spot, I still had that competitive spirit.  I figured I was only about 15-20 minutes from the Barrel Roll aid station. 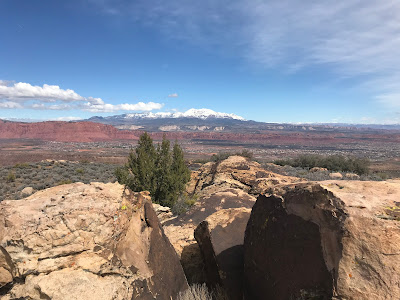 There were some whoop-de-doos on the initial descent, one of which I unintentionally did a tail-whip and landed (tire side down) into some bushes (fortunately not cacti). How I landed that one safely I do not know ... cat-like skills I suppose! From there I rode a little lollipop which consisted of Rim Rock and Rim Ramble.  My legs either began to recover a little or my focus was on the trail for the pain in my legs seemed to subside.  I still had Carri in my sights and sought to reel her back in.

I came into the Barrel Roll aid station (mile 35 and 30 minutes after running out of water), grabbed my drop bag, swapped bottles, and took a caffeinated Gu shot.  Barrel Roll was about the same mileage as Zen, but less technical and with half the amount of climbing.  Knowing that I only had about 6 miles of tough trail left (the last 3 miles of the race being mostly downhill and with 1 mile of pavement), I attempted to make one last hard push.

I took the wrong line into the entrance of the saddle section of Barrel.  I stopped, backed up, and then cruised through the steep descent.  I knew better than to try the knuckle breaker climb and ran up that short steep pitch before hopping back on.  The last 3 miles I began to feel real good as the caffeine kicked in and I started picking off racers one by one.  The final descent back to the double track was so much fun and I just let'r rip, knowing that if I did flat, I would just ride my Industry 9 carbon hoop into the finish.  At this point, finishing quickly was worth a potential rim sacrifice.  I was so ready to be done!

Unfortunately, even sharing pulls with a fellow racer, I was unable to reel Carri back in (she finished 1 minute ahead).  I crossed the finish line in 4:31:46. The website purports a time of 4:21:15 but there were some major issues with the timing across all categories, so I am pretty sure my Garmin was the correct time. I managed to eek out a top 10, pretty proud of that I must say, and I did finish ahead of the ladies in the Master's category.  Hmmm ... maybe I will make a go out of a NUE series championship in 2020. 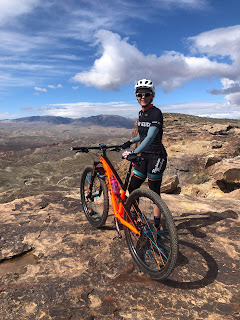 I absolutely loved this course.  My meat and potatoes!  The slickrock is amazingly grippy.  To be able to climb super steep pitches without any rear wheel spin is so much fun.  I wish I had more time to spend and session some of the sections that I was just too gassed to attempt.

Spending a week with my teammates on this Rescue Racing Stokecation was a pure joy.  I LOVE you guys:  Twan, Smooshie, Durango Kid, DJ, and Scott "1000 TSS" Morman.  I finally got my RR name by way of  Smooshie:  3G! And seeing how Joe Urbanowicz was so "starstruck" with Utah and crushing the hundie at only 16 years of age ... well, made me feel good that I could play a small role in his happiness.

Linda Wallenfels finished 2nd in the Open category.  Hell yeah, that's my coach.  And then she played tour guide, showing us new trail in the following days.