This second running was a far cry from the first back in 2014.  Back then, Mother Nature unleashed her fury upon me and 50+ other racers in the form of rain, sleet, and snow.  Temps hovered in the 30's and the visibility was down to 50 feet at the highest points of the race due to heavy fog.  I dressed appropriately and survived.


I was much happier at the start this year in a sleeveless jersey and shorts.  I chose to race my Niner Air 9 RDO with 2.0 Bontrager XR0 tires.  This was a "six of one, half dozen of the other" course.  I chose the mountain bike more for comfort as this was a training race for me.

With sunny skies and a starting temperature of 70 degrees, the Knoxville SS Mafia (Gary, Chris, and Jimmy) paced us comfortably on the pavement to the first climb.  After the hard right, all hell broke loose and the race was on!  I chose to ride a comfortably hard pace up the first climb.  I wasn't sure where all the ladies were; well, save for Kaysee, who was probably in the lead group putting a hurtin' on the boys.

At the top of the climb I was feeling good, so stayed at that effort.  Rolling along the ridge line, I caught up to Sierra and hopped on her wheel.  She was on a gravel bike and not knowing her, I bided my time. I just kept it in my happy power place.  A short gravel climb had me slowly pulling away from her.  Not looking back, I just kept the pedals turning.

Further up the climb, Elizabeth caught me. We fist-bumped, chatted about how stoked I was to have my team wearing her socks ... and then she just rode me off her wheel.  WTF?!? After all the warm fuzzies she showered upon me, she abandoned me?  Nah, but seriously, she was going faster than I cared to so early on.

That 3 mile descent was a hoot!  I was loving the extra 10mm of tread, straightening out the corners, and passing several skinny tired bikes in the process.  I was extra careful in the corners as I did not want to become someone's hood ornament.

Crossing under I-40, I caught sight of Elizabeth on the pavement paralleling the Pigeon River.  This was a gorgeous stretch of road and with my legs feeling good, I decided to try and reel her in.  "Slow is fast," I kept telling myself.  I did not want to blow myself up, so just barely kept her in sight.  As the pavement turned to gravel, the forest enveloped me.  Shade was good!  This climb was 4 miles long, but at a "perfect for me" grade.  About midway up, Sierra caught me. She put the hammer down as she passed.  I didn't respond because I knew exactly what I needed to do to save it for the Max Patch climb.

For a short period, I lost sight of them both.  But at the top of the climb, I saw them turn left onto the gravel of Buzzard's Den.  Sweet!  I rallied a bit at the top and kept them within 100-200 yards as we rolled the undulations of this section.  I let them play the cat and mouse game over the next several miles and slowly caught up to them.  I was most impressed with Sierra's descending skills on her gravel bike.  It was all I could do on my bike to stay connected!  Had I been on my gravel bike, I would have had to take more risks than I would have liked.

Once the road pitched down for the 5 mile descent to Harmon's Den, I bridged the gap and we three rode as one.  The road was a bit slick and muddy in sections, what with all the heavy rains leading up to the race.  I followed their lines down the mountain.  Hitting the flat section just prior to the aid station, I checked my bottles.  One empty, one 3/4 full.  Perfect.  I would not have to stop at the second aid station.  And there would be one less bottle to drag up the 8 mile climb.  I knew I would be able to fill up at the third aid station at the top.

As the three of us approached the aid station, Elizabeth peeled off.  Sierra and I continued. We chatted for a couple minutes, her saying how sketchy the Buzzard's Roost descent was and me saying how she raged it like a pro, right on the edge and just barely in control!


At this point, 25 miles in, the legs were feeling sparkly.  I turned the dial up on the wattage meter, seeing if Sierra would respond.  At first she did, but within a few minutes I had opened up a gap.  Turning it up another 10 watts, I decided then and there I needed to make my move.  She, as well as Elizabeth, were equally fast on the descent, and with the last 6 miles being pavement, I needed to put some time on them.

From bottom to top, I felt fantastic.  I once again played my little game of stand and hammer the steeps and sit and spin the "less steeps" in this case, as their were no flats or even false flats.  Towards the top, I caught sight of Jimmy.  In order to catch him, not only was I feeling really good, but he had to be feeling really bad.  He was a BIG carrot and I slowly rolled up to him, finally making the pass after the left hand turn.  He gave me words of encouragement and let me know that Kaysee and Eleanor were ahead.

I had my bottle filled at the third aid station in record time and tried to punch it to the top where the left hand turn onto 2250 was.  I must have been in oxygen debt, as I saw an unmarked left turn and swore that was where I needed to go.  I almost did, but circled around, hoping that Jimmy wasn't too far behind.  I probably only lost about 20 seconds, but it felt like an eternity!  I didn't turn left but stayed straight and soft pedaled.  Jimmy came around the bend and said I was on course.


Back on the gas, it was that much further when I saw the arrows for 2250.  Turning left, I began the gnarly rutted, cat head littered descent.  Way more fun on the mountain bike!  Having suspension and fatter wheels, I felt like I was flying down it!  After a couple miles of descending, I came to a fork in the gravel road where I knew I needed to go left.  However, ALL the course markings pointed me to the right.  Even the "X" sign (meaning wrong way) was on the road to the left.  All the tire tracks went right.  So if I was wrong, I was in the same boat as everyone else.

This was a hard descent.  I had to be on point as there were washed out sections that I quickly had to bunny hop or maneuver around.  Although it was a net loss of elevation, there were some "ups" that had me feeling a bit of fatigue in the legs for the first time.  Fortunately they were short and I could just grit my teeth and power through. 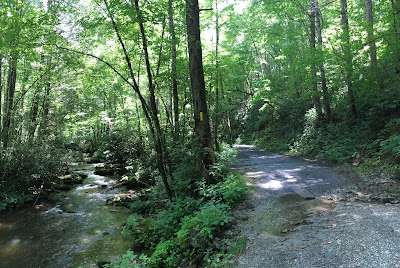 Towards the end were two creek crossings.  The first was bottom brackett bearing deep, so I opted to cool off the feet and calves.  The second I rode through.  Then a short pedal and the road I was currently on connected back into the road which I should have been on.  I even saw the backside of the wrong way sign (on the road I had been on that I thought was wrong) as I turned right onto the correct road.  Indeed!  Hooligans and their shenanigans!  Fortunately it looked as if all racers had been tricked and at least we were put right back on track eventually ... instead of a 4 mile descent to a dead end!

A few more minutes of gravel descending and then I would be experiencing a time trial of paved hell to the finish!  But as I popped out onto the pavement, I saw my savior!  A Sycamore Cycles racer on a cross bike!  Hoo rah!  Bill made my day!  After hopping onto his skinny ass ... wheel, he pulled me 5 miles to the finish.  It was mostly downhill, but with my fat tires, it still would have been miserable.  And I would have had the added stress of Sierra or Elizabeth catching me.

Another #bestdayever with me rolling under the finish banner in a time of 4:12:03.  Good enough for third!  I'll take it!  It had been a long time since my legs have felt that good.  I am hoping I am doing everything right and that spark doesn't fizzle out as my A race is September 28, The Ozark Trail 100.


Shout out to Eleanor for raging it today on gears (is she getting soft?) and to Kaysee who has grown exponentially into a world class racer.  For me to grace the podium with these Knoxville power houses is humbling.  And I have no doubt that Sierra will be kicking my arse soon!