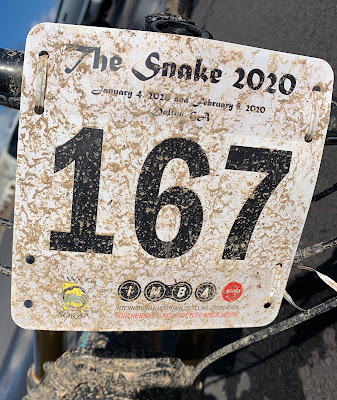 Driving down to the start early in the morning, watching the rain beat down on the windshield, I could only laugh.  Heading into my 16th year of doing this race, I have seen all conditions, but mostly miserably cold and wet ones.  At least today the temperature was starting in the low 50's and supposed to stay that way.  I was racing the 34 miler, what I call the meat and potatoes of the 3 distances offered.

My shuttle arrived at the start later than I anticipated.  After checking in and getting ready, the start had begun.  I let most people go ahead of me, as I needed somewhat of a warm up so my body wouldn't implode in the first 10 minutes. A few minutes of squats, jumping jacks, and kick backs, I rolled off the line and down the fire road skirting around the edges of multiple mud holes.

I was behind a group of juniors and unfortunately one of them bobbled at the short steep V climb.  I  ended up dismounting and running up that climb.  Oye!  That got the heart rate up quickly!  I made my way around multiple racers, biding my time and trying not to burn any matches, as I knew my book was not full.

The bridge across the Dry Creek was submerged about one foot at the other end.  I unclipped and threw my feet up high as my front wheel hit the water.  I was only about 50% successful at keeping my feet dry.  The climb up to the first section of single track was in good shape considering the amount of rain it had gotten over the last 48 hours.  I continued to make my way around riders in an attempt to have a bubble around me once I entered the single track.

The trail conditions were pretty sloppy and it felt like my wheels were being grabbed by a mud boggin' monster.  And then a noise began emanating from my front end.  I couldn't tell if it was my headset or fork, but it was annoying.  I ate and drank on the gravel road, hit Pine Hill with a vengeance, and then rode a dude's wheel off the backside.  I was a little grumbly about not going as fast as I wanted to, but it was my bad for not getting around him sooner.

I veered left at the next creek crossing, not knowing how deep the straight shot was and how much leaf and mud build up was on the far side of it.  This next section leading to the Horn Mountain climb, was obnoxiously muddy.  I felt like I was skiing more than riding. Aside from the mandatory mud wall climb, I was able to stay on the bike for the remainder, including the left handed switchback to begin the single track climb.

This section of the race has one big 1 mile climb, followed by 3 smaller, but steeper and more technical climbs.  Towards the top of the first climb, I heard a female voice behind me as I passed another racer.  Once I got around the guy in front of me, I asked her is she wanted around me.  "No ma'am," she replied.  I just got "ma'am 'ed!"  I took it as a sign of respect, rather than it being related to my age.  I got a chuckle out of how my first thought was, "Damn, do I look that old?"

She (I later found out her name ... Nicole) stuck to me like glue over the remaining miles.  I would pull away from her on the steeper, technical pitches and descents, but where the trail smoothed out a bit, she had the strength and fitness to reel me right back in.

At the SAG stop at Snake Creek Gap, I swapped bottles and downed a caffeinated gel.  I only drank 1/2 of a bottle that first 17 miles, a fail on my part.  While I was stopped, I saw Nicole go by.  That would be the last I would see of her until the finish.

I struggled up the Hurricane Mountain climb.  My fork was now beginning to feel AWFUL; stiff and like a pogo stick.  Once on top through some of the faster sections, I felt better and was able to stay on top of my gear.  The sun was beginning to shine and I could feel its warmth.  But as I began my descent down to the creek crossings, I was having a hard time seeing the trail for the sunshine.  I had a few "Oh, shit!" moments as I encountered a downed tree and some slippery turns, but managed to stay upright.  The multiple creek crossings all became just one big creek ride, as the water was flowing down the trail.

On the slip n slide climb up to the final single track, I came upon my team mate, Eric Henderson.  Off his bike with a broken derailleur and a rear flat, I asked him why he even had a derailleur.  His reply was that I had one.  To which I responded that I am old and earned one.  This light hearted joking conversation helped me to fend off the grumpies during the final stretch.  Because, at least I had a functioning bike.

By now, I had lost feeling in my water soaked feet.  This hindered me a bit through the rock gardens as it made proprioception difficult.  This, combined with a sick fork, functioning at only 25% capacity, had me doing a couple Yosemite Sam dances in my head.  Then I went into "adapt and overcome" mode and managed to surprise myself cleaning a couple sections I usually struggle with.

The descent off Tower Road was heinous!  Huge ruts and exposed culverts probably made this the most tricky section of the course, as normally this was almost a brake-free section with lots of speed.  But today I had to baby it down.  Cruising down the road, I was happy with how my day went, given the conditions.

I finished in 4:10:20, by far not my fastest time, but right where I want to be this early in the season. I knew that my Big Dumb ride from earlier in the week might hinder my performance, but it was a risk I was willing to take.  I must be patient; fast will come later.

One mistake I did make was not drinking enough.  Over the course of 4 hours, I had only taken in 32 ounces, along with 700 calories.  Although I did not feel "bonky,"  I am sure this under-fueling played a small part in my performance.  Rookie mistake.
Posted by Carey Lowery at 11:44 AM No comments:
Email ThisBlogThis!Share to TwitterShare to FacebookShare to Pinterest
Labels: Snake Creek Gap TT
Newer Posts Older Posts Home
Subscribe to: Posts (Atom)