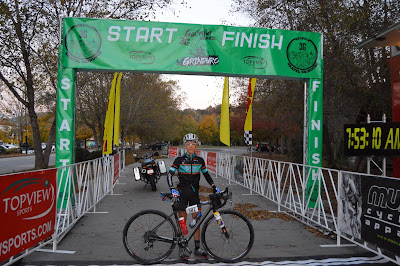 This inaugural race was put on by Tim Molyneaux of TopView Sports, a predominantly road racing promotions company.  Tim's friends pushed him into getting a little dirty and creating this "groad" event.  The start/finish was in Helen and was one big ass clockwise loop in the mountains of Northeastern Georgia. There were 3 distances:  108, 64, and 30.  You already know which one I chose.  I was the only woman in a field of 14 bike-crack addicts.

The course consisted of predominantly gravel, but with enough pavement that I chose to ride my Niner RLT RDO with Maxxix Rambler 40mm up front and 38mm in the rear.  My gearing was a 34T ring with an 10-42 cassette.  I was never really spun out on the road as I used the fast sections to spin easy and recover.  But what that gear ratio afforded me was less time in the red zone on the super steep climbs, of which there was a cornucopia.

The start was a crisp 38 degrees.  Surprisingly I did not find myself shivering uncontrollably.  It was a controlled start through town.  At about the 3 mile mark, where the first gravel section began, we were unleashed.  My plan was to use the first climb up to Unicoi Gap as my warm up.  After a nice pedal along some smooth dirt that paralleled the Chattahoochee River, the 6 mile climb at 6-10% grade began.  I found a good steady pace that had me gradually reeling in a throng of racers over the next 45 minutes.  Towards the top I caught up to JOM of gravelcyclist.com and we chatted a bit.  He even video'd me so maybe I will get my 15 seconds of fame.

At the top of Unicoi was the first aid station.  I felt so bad for the volunteers because it was brutally cold.  I passed by without stopping and began the 7 mile paved descent.  Despite a layer of duct tape on my shoes, 2 pairs of gloves, and Hot Hands in both shoes and gloves, they turned into blocks of ice!  My eyeballs were so cold, I was afraid to blink for fear of my lids freezing to them like a tongue to ice cold metal!  I had a couple more miles of pavement to try to thaw out before the first KOM/QOM segment.

The Addis Gap segment was 13 miles long and included both the climb up to the gap as well as the descent down Wildcat Road. When I crossed the timing mat to begin the segment, I could at least blink my eyes, but I could not yet feel my extremities.  This gravel climb was super chunky, much more suited to a mountain bike.  It was slippery as well, what with the embedded mossy rocks and freshly fallen leaves.  With shadows cast by the rising sun, it was all I could do to make out "the line."

After beginning the descent off the gap, I quickly realized that the climb was the easy part.  I wanted to go fast, but also did not want to risk a flat or a crash.  I felt like I was descending blindly, using my front wheel as a blind man's stick.  It was crazy, what with all the leaves and shadows!  I barely had time to steer away from wheel-damaging holes and drops.  Once I popped out of the ORV-like trail to the gravel of Wildcat, it didn't get much easier.  Talk about rowdy!  I hung on for dear life and a few times felt the "pinging" of the spokes as I slammed the front wheel into some chunks of rock rearing their heads above the gravel surface.

Rolling into the second aid station after passing over the finishing timing mat, I stopped to check in (1st mandatory check point for the grinduro racers), shed some clothing, refill my bottles, and use the porta-potty.  There was a throng of racers ravenously pillaging the provided food.  I reached into my feed bag, pulled out a Honey Stinger GF waffle and enjoyed it while making the push to the next gravel section.

I was relieved to see that the owner of the pack of dogs at the top of Popcorn Road had kept them up.  I was ready with my trusty hickory stick I had procured in the drainage ditch.  During my pre ride I had to use one to fend off their shark frenzy behavior.

The next "fun" section was Rainbow Creek Road.  This gravel road morphed into single track that began just inside of private property that kinda looked like a fighting rooster farm/meth lab. I saw the orange ribbon that led the way to primitive single track along a creek.  It was about 1/2 mile long and included a creek crossing and a 30 yard hike a bike.  From there it was an old gnarly road bed with mud holes galore.  Slow going for me as several of those mud holes had me skirting around them, off the bike style.  I had no intentions of swimming today!

I rolled into the third aid station at mile 50 to sign in (2nd mandatory check point for the grinduro racers), wolf down a banana, and refill 1 bottle. From here it was 8 miles of pavement to the second KOM/QOM segment.  I used this time to refuel and perhaps recover a little as the upcoming section was 16 miles long.

This timed segment started with the dam climb, a one mile grade at 15-22% and then meandered around Lake Rabun and Lake Seed.  About 5 miles of pavement, the remainder was fairly smooth gravel, but the turns were tight.  Think of it as a gravel version of Tail of the Dragon.  After the damn dam climb, I enjoyed the ups and downs and turns of the segment.  The flow was mmm so good! Once it turned to gravel, I had to be more cautious as the road narrowed.  Along this road were high dollar homes and I encountered several cars (think BMW, Mercedes, Lexus) and several people out and about, usually with a dog or two.  Fortunately, everyone played nice ... even the unleashed dogs!

The last 2 miles of this segment were brutal.  No less than 9 damn climbs, of about 30-45 seconds duration.  These would follow after a fast descent, but I could not carry my momentum at all. At the bottom of every descent would be a tight right-handed turn into stutter bumps. And then the road would shoot straight up at 10-12% ... on loose gravel.  Each one felt like I was in a boxing ring, getting pummeled.  I was never so happy to see the finishing timing mat.

Despite 30 miles to go, I was smelling the barn.  Looking at my Garmin and doing the math, I set a goal I thought was doable ... sub 9.  I had one more KOM/QOM segment, beginning at mile 85.  So I had about 5 miles to get my shit together.  I stopped at the 4th aid station, shoved a banana and waffle down the hatch while hitting the porta potty.  I am the queen of multitasking at aid stations. After the last segment, I could tell my legs were fried and my low back was tired of assisting.  Both body parts were close to calling a mutiny.  I was hoping that calories would bide me some time.

My GI had time to process the food on the paved section leading to Piedmont Mountain Road.  This final KOM/QOM segment was 8 miles of gravel.  Though nowhere near the climbing of the earlier segments, it was far enough into the race that it felt the hardest.  Starting off with a 2 mile 6-10% grade and then continuing on with a series of descending rollers, I buried myself in the pain cave for 35 minutes.

The last 13 miles was a bit of a blur. The miles and minutes ticked on by.  Hitting the final gravel stretch, I knew it was just a bit of a climb, then onto Unicoi Hwy for a nice descent back into Helen.  But wait?  What?  At mile 98, Tim decided to throw in a little detour that ended up being a Brasstown Bald type of climb.  Good LORD!  In some sections the grade was 22%!  Finally, finally I reached the top and quickly descended the 1/2 mile back down to Bean Creek Road, a 1/4 mile further down from where I had turned off Bean Creek to do this "cruel and unusual" section.

Descending back down to Helen, I noted the time and was confident in making it under 9 hours.  As I approached the city limits and smells of funnel cakes and other fried foods, I hit traffic ... and lots of it.  Swarms of people lined the sidewalks, crosswalks, and idling vehicles on Main Street made for slow going.  I even had a horse and carriage pull out in front of me.  Nothing like the intermingling smells of desserts and manure.

My sub-9 was thwarted by the human lemmings, but I still managed first in the women's race with a 9:03.  Yeah, I know.  I just had to finish to win.

I want to thank Tim and Joey for an awesome course.  When I was initially getting the beta on the loop, I was a little bit disappointed in the amount of pavement.  But now knowing how it felt putting it all together on race day, I was delighted.  It was kind of a Jekyll and Hyde course, with the brunt of the climbing being up front.  The scenery was spectacular and the paved roads took me through beautiful countryside.  I was very thankful to hit each and every bit of pavement, as a bulk of the gravel was ROWDY!

Be warned:  although the course is marked, mostly, you still need to rely heavily on your GPS.  Which is perfectly fine with me, as I like this kind of self-supported racing.

I look forward to next year and perhaps doing the 200K version.