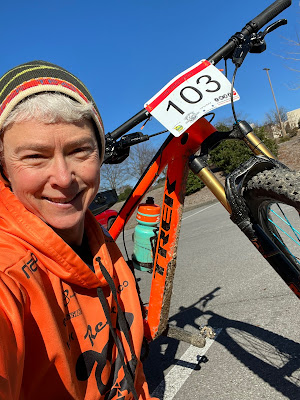 True to its nature, Saturday morning turned out to be brrrr! cold, with a starting temperature of 24 degrees.  And with the previous rains, the course would be squishy.  After the longest bus ride ever, I arrived at the start at 8:10.  At least I did not have to stand in line and shiver awaiting the start.  As soon as I had signed in, took one last pee, dropped my SAG bag, I headed to the line.  This year, it was all about comfort.  I had ALL the layers and had invested $150 in a pair of battery operated gloves.  I was NOT getting cold and I was planning to ride just under my "sweat threshold."

My nutrition plan was most interesting as I started a Whole 30 on January 1.  In my CamelBak was watered down orange juice with just 1 scoop of Skratch (19g added sugar).  This shouldn't be enough to throw off any progress I had made, but might just help me avoid a total bonk).  Instead of gels, I had baby food pouches.  I figured I would probably be going slow enough that I would be burning mostly fat anyways.

The start was anything but race pace.  The initial 2 miles was a warm up as the legs were stone cold.  I also tiptoes around the mudholes; I did not want my feet wet so early on or my drivetrain angry.  Although Dry Creek was up, the bridge was long enough so that my tires did not even get wet ... what a pleasant surprise.

I upped the pace a bit on the double track climb and thought I was moving at a fairly decent pace ... until Luka blew by me, wishing me well.  Holy smokes, kiddo!  Oh, to be young again. Although I had no goals for this race, I figured I could finish right around the 4 hour mark.

As I entered the first section of single track, I was happy that my fingers and toes were warm.  Being able to feel my extremities makes it so much easier to shift and brake and feel the bike beneath me.  The trail was a little slicker than I thought it would be; still lots of leaves and there was frost on the roots and rocks.

As I descended down the gravel, I looked down at my hands and noticed that my gloves turned off.  WTH?!?  I pushed the on/off button, but nothing.  40 minutes in and they were dead ... argh!  I just hoped they were insulated enough to keep me warm until the temps began to rise.  After the Pocket Road crossing, the trail conditions deteriorated and became spongy with water flowing down the middle.  Although that first creek crossing was not pretty, at least I managed to keep my feet dry.

I almost made it up the red clay climb, but had to dismount after I spun out in the leaves.  I finished it off with a quick HAB, and continued pedaling to the next tricky section, the short hard steep left hand switchback.  But first I had to call back a racer ahead of me, who went straight instead of taking the switchback.  How he thought he was on course still befuddles me, as he had to dismount and carry his bike over downed trees, to continue off course.  Now that's some serious oxygen debt so early in the race!

I managed to clean the switchback and begin the slow grind up Horn Mountain. This section I feel is one of the hardest.  Beginning with this climb there are 4 lengthy climbs before you get to the Snake Creek Gap parking lot.  The first is the longest but also the easiest of them, the remaining 3 are all rideable, but technically challenging with root step ups, loose rocks, and steep pitches.  Every race, one of my mini goals is to clean all 4; it is about 50/50 chance for me.  Today, I had a small victory and did it.  Mind you, I could probably walk it just as fast, but where lies the challenge with that?

The final 2 descents down to the parking lot were as sketchy as hell!  Watering eyes, heavy leaf cover, and multitudes of baby heads made for a butt puckering slow ass ride down; I felt like a beginner.  As I looked at my Garmin heading into the parking lot, I was right at 2 hours.  Welp, there goes my 4 hour wish.

At least I was warm.  I ditched my dead gloves for my HandUp ColdER ones a core layer, guzzled some baby food, dropped my CamelBak, and grabbed a full bottle for the last half.  One of the volunteers tended to my muddy glasses ... thank you!  I slowly worked my way up Mill Creek Mountain, got off at the blown out sandy/rocky climb, white knuckled the switchback descent that gets worse every year, and played it safe down to Swamp Creek, even getting off and tip-toeing over the last creek crossing, as Mother Nature has turned that one into a swimming hole.

The ground had thawed by the time I began the double track climb and what with all the other racers' tracks, it was turning into a soupy mess.  It felt like quicksand at times, or was that my legs beginning to die?

Finally the last section of single track, the creme de la creme!  Had I enough gas left in the tank to enjoy this?  I would know very soon.  As I was cruising the first slightly uphill section, Sasquatch jumped out from behind a tree and high five'd me!  Now that was a morale boost that had me moving at a pretty good clip for a while.

Notables during this last 5 miles of tricky tech were cleaning the rather steepish climb before the wall, cleaning the climb right after the wall, not dying on the washed out Pisgah'ish descent, and biffing the gunsight pass climb (I was so close, but also so tired at this point).

A junior racer and I came out of the single track in close proximity and began the final pavement descent down to the finish.  As he crested the last hill on the pavement, he attempted to gear down, hammer down on the pedals, AND get into the recently banned UCI Super Tuck (all at the same time), losing total control of the bike in the process, and nearly taking me out!  Somehow he managed to save it and I braked/swerved away from his careening bike and we both escaped destruction.  He did apologize, once he recovered.

I crossed the finish line in 4:32 ... yikes!  I have got my work cut out for me for February, but I do like a challenge.  Fellow Rescue Racer and long time friend, Lisa Randall, currently sits atop the leaderboard.  But everyone said the course felt slow, so maybe it was not all a lack of higher end fitness for me ... we shall see.

Now for the best race news!  Young Jameson, aka Snake Killer, at 11 years of age, finished the 34 miler.  So stoked for this young man!  One of his biggest accomplishments yet.  And I believe the youngest finisher of this distance. 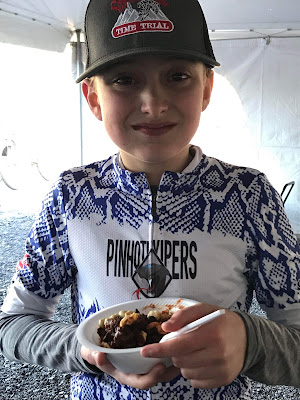 Posted by Carey Lowery at 11:48 AM No comments:
Email ThisBlogThis!Share to TwitterShare to FacebookShare to Pinterest
Newer Posts Older Posts Home
Subscribe to: Posts (Atom)