After 25+ hours saddle time in Idaho which included the Marathon XC Nationals in Sun Valley followed by 10+ hours in Pennsylvania prepping for and racing the XC Nationals in Bear Creek,  I have a real appreciation for the "Her" line of Chamois Butt'r.


I first mentioned this product here.  Now that I have had many hours of ride time I am ready to step on my soap box.

My saddle contact points remained happy throughout ... no chafing, no sores.  Some say that this product is too thin and gets "sweated" away quickly.  Although the product may seem to have disappeared after an hour's saddle time, it continues to work albeit on a "microscopic" level.  The tea tree oil, aloe vera, and lavender oil all inhibit bacterial and fungal growth.  So even after my ride when I spent extra time in my chamois enjoying a soak in the cold mountain waters or consuming my recovery drink and chatting about the ride or the race course with my friends, Chamois Butt'r Her was keeping me protected.

Sure, there are "thicker" products on the market.  But they contain waxes, parafins, and heavy doses of lanolin, which are all difficult to wash out of your chamois.  I know from personal experience just how quickly it can destroy a chamois.

There are products out there that are comparable to Chamois Butt'r Her with regards to the ingredients, but they also come at a much higher cost.

My only complaint is that it is not offered in a tub.  Trying to get the last ounce or so from the tube is about as hard as herding cats.  But if you want an all natural product produced here in the good 'ol US of A, you really need to try this product.  It comes in an 8 ounce tube for $15 and in convenient 0.75 ml reapplication packets. 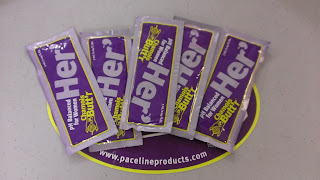 Thank you Paceline Products and Chamois Butt'r Her for being part of a magical formula that helped me to attain a 2nd place at Marathon Nationals and a 1st place at XC Nationals, both SS style!
Posted by Carey Lowery at 9:10 PM No comments:
Email ThisBlogThis!Share to TwitterShare to FacebookShare to Pinterest
Labels: Chamois Butt'r, chamois butt'r her, paceline products


This 6 hour is unique in that it starts at 3 pm.  All laps must be finished by 9 pm or it doesn't count.  Chris, Lisa's husband, does the timing (he created the program) and what is really cool is that the results are "real time" and anyone can access them through the wireless feed at the venue or at an external website.

I was coming off a peak, but still feeling really good, and it was a no-brainer to race SS in the Expert Women's field.  This course is super duper SS friendly and there had been some work done since I last raced here in 2011 ... like big swoopy berms!  I decided on a 32 x 20, same gear I had run before.  It was a little spinny on the Dwelling Loop, but perfect for climbing the VMT 8 times!

This was a low key race for me and after my insides had been turned inside out at XC Natz, I was happy to have no butterflies or other critters fluttering about in my stomach.  My only concern was not being trampled to death at the Lemans start, which was about 100 yards long.  I was able to position my bike close so as to not run so far.

The temperature was a humid 86 degrees at the start, but was not too bad in the woods.  Coach told me to just "go have fun" at this one.  My plan at the start was to go hard to avoid as much cluster as I could.  When Lisa said, "Go!" I felt like a wildebeest during a croc infested river crossing.  Elbows wide and short steppin' I managed to avoid going down.  However, someone behind me was not so lucky.  All I felt was a hand hit my lower back and slide down (seemed like slow motion) my butt, legs, and then hit my shoe.  I never looked back!

And in keeping with tradition, I will briefly summarize each lap.

Lap 1:  Why is there always a few who must make those stupid passes so soon into a 6 hour race?  (I will use you for traction should you go down!)  Settle, Carey, settle. Your time will come.  And it did.  I was rocking and rolling on Dwelling when suddenly I spun the cranks and nothing happened.  Dropped chain!  You got to be kidding me!  Spent two minutes figuring out how to get it back on:  big ring, little ring, back spin, and it's on.

Lap 3:  People I did not even know were congratulating me on my National Championship win and running off the trail to let me on by.  Wow, I was amazed!  And then my (expletive!!!) chain fell off again!  Put it back on in record time, but now, my mind went from focusing on the trail to a bunch of "What if's?"

Lap 4:  Started doing the math and realized that I would be able to do 8 laps. "Oh, goody,"  I said as I felt the first signs of fatigue set in. 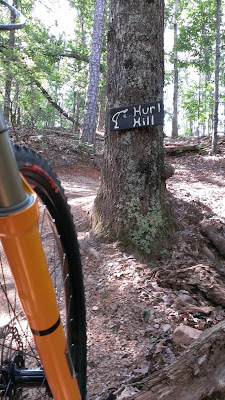 Lap 5:  Please let me make it through this lap before my cranks fall off!

Lap 6:  Red Bull does give you wings!

Lap 7:  Heckling some fellow racers as came up on them, all in good fun.  "Suffering is good for your soul!"  "You can rest when you are dead."

Lap 8:  Pumped up a burped tire and stuffed my light into my pocket.  Goal was to try to keep up a faster pace than the setting sun ... I lost.  I did not want to stop and mount my light so I leap frogged from racer to racer, using their lights to see the trail.

I ended up with the win and some cool prizes, including this sweet podium shirt. 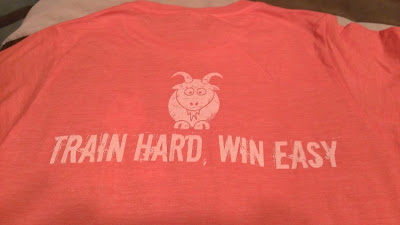 I met some FB friends, face to face, as well as some other cool SS'ers.  Courtney Smith, one of my FB peeps in the flesh, was also riding a single speed but with a rigid fork.  I was most impressed by her skilz.  It is good to see other women riding one gear.

Even though I had several mechanicals, I was able to work through them and keep the hammer down.  I was just so thankful THIS did not happen at Nationals.  I think I have met my mechanical quota for the year.