Butt'r Makes It Better ... And Bigger

Chamois Butt'r decided to go big earlier this year with the release of their 32 ounce pump style container in both the Original and Her versions.  I got my hands on this several months ago.  At $59.99 retail, it is a steal, especially when compared to some of the other top brands of chamois cream.

The first time I used the pump with a bottle of Chamois Butt'r Her, however, I was disappointed.  It took forever to get the product out.  I mentioned this to Curt Shelman, the man behind product development, when I hung out with the Chamois Butt'r crew during the Dirty Kanza 200.  We had a rather lengthy discussion about this new pump while pre riding the day before the race. He told me that it was possible that I just got a "bad apple," and to try another pump.  He also mentioned that the Her product had the highest viscosity of the 3 formulas (Original and Eurostyle being the other two). He wasn't totally satisfied with the pump, but at the time, it was the only one he could find that would fit the 32 ounce style of bottle they were using.

When I got back home, I swapped out pumps and indeed I had gotten a defective one. But, it still took 3-4 pumps to get out enough quantity sufficient to slather my chamois. 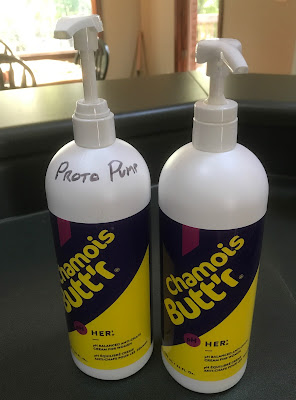 Fast forward to just last week when Curt sent me a brand new pump. This one has a stronger spring mechanism and will pump twice the volume (8 ml as compared to 4). Hallelujah!  This new pump is on steroids.  After I primed it by loosening the top and jabbing it up and down in the thick butt'r, I screwed it back on and with one pump had plenty to slather.  I pumped one more time for good measure and my nethers were in heaven.

I give 5 stars for this new pump.  If you have yet to try the Chamois Butt'r line of products, I double dare ya!  They were the first to develop chamois cream and have been doing so for 18 years.  The Her product kept me chafe free during the DK200 and the Dirty 130. 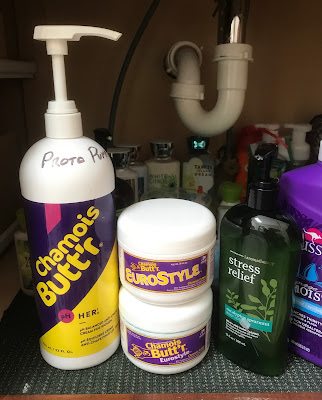