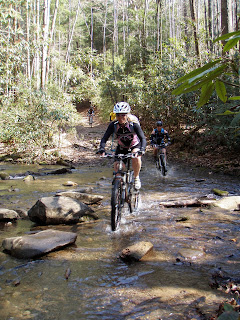 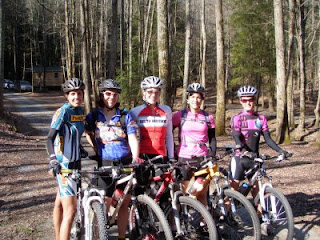 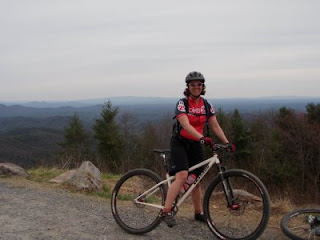 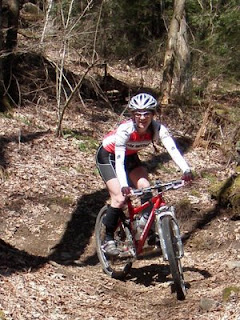 Yeah, yeah ... I am a bit late posting this one, but better late than never. This is one gathering you ladies out there do not need to miss.
I had just finished a pretty heavy training load the week leading up to it, topping it off with the Cohutta Death March. For those of you unknowing souls out there, the Death March is a 75 mile gravel grinder with 9000 feet of climbing, 70 miles of it being in the Cohutta 100.

There were 12 of us that stayed at Mulberry Gap. From Namrita whose poor bike was a conglomeration of components, some of which worked (hint, hint: she NEEDS her Rotwild steed!) to Emily who likes to eat pizza and drink beer while showering ... with her kit ON, all the women were very cool and unique! Different levels of skill were represented, but no one was pushed to the edge, unless they so desired. There were options of varying mileage and everyone enjoyed the exquisite trails that the Chattahoochee National Forest had to offer.

A group of BUMP girls came up from the flatlands of Alabama, but they rode the mountainous terrain extremely well. I suspect they needed to feel they earned the post ride beers ... and wine ... and some sort of pomegranate martini drink. And earned them they did! I enjoyed their giggly and vivacious nature. And boy could they ride! Stacey is a Super D extraordinaire!
Mandy from Bike29.com came down from Vermont to escape the cold and try out her rigid singlespeed. She definitely got her work out in as she climbed up Potato Patch to the Upper Bear Creek parking lot ... twice. Gail tamed Pinhoti 2 this time and came away with an awesome ride and bones intact. Debbie, who was at the first women's only weekend last fall, has gotten even faster!
Most of these women have kids, which was pretty cool. We got to chit chat about balancing our family lives with our passion. It is so good to see older women in this REAL sport as opposed to other recreational ventures.
And where else, besided Mom's, can you have "hot, fresh out of the oven chocolate chip cookies" after 3 hours of riding. Dianne and Ginni are like my surrogate mothers ... they know how to nurture. Once again, the food was spectacular: baked potato bar with chicken and steak, pancakes with strawberries and bananas, chicken salad, pita crisps with "to die for" hummus, roast beef, corn casserole, awesome green salads, and the list goes on.
I will say, I had the best two nights sleep in a long time. 10 hours each night of restful bliss and no dreams about work. And the mealtime conversations were great; everything from broken bone stories to tire selection to your children's education.
I managed to get in 7 hours and 60 miles of riding. I am looking forward to the next one!
Posted by Carey Lowery at 3:38 PM 1 comment:
Email ThisBlogThis!Share to TwitterShare to FacebookShare to Pinterest

For those who abstained from last year's holiday goodies (that would be me), now is the time to enjoy Mom's homemade treats. You see, while everyone else was partaking of pumpkin pie, I was wrapping my slices up in saran wrap and popping it into the freezer. Although there might have been a tear or two shed then, now there are tears of joy upon opening these delectable treats trailside.

This past week was a 3 day block of L3 tempo work-outs. One on asphalt and two on dirt. Zeke's wishes of long gravel grinders had come true. On Wednesday, with sweet temps, we pedaled the roads through McMinn and Monroe counties. We managed to get in a little over 4000 feet of climbing in 75 miles.

On Thursday, we headed over to Polk County and rode the Kimsey Mtn Loop: 5 hours, 51 miles and 6000 feet of climbing. It was a joy to refuel on pumpkin pie about 1/2 way through the ride. Although it was cloudy and cool and rain threatened the whole time, we were blessed to not have to pull out the rain gear.

On Friday, we rode part of the Cohutta 100 fireroad loop: 6 hours, 61 miles, and 7000 feet of climbing. Today was pumpkin cheesecake! At these slightly less than race efforts, it is nice to be able to enjoy solid food. For me, race days are all about gels, the only thing I am able to easily digest at high intensity. Once again, we managed to escape a deluge of rain ... only in the last hour did it rain lightly.

Next week is a repeat block of 3 days. I can hardly wait! More pumpkin pie and chocolate cake awaits!
Posted by Carey Lowery at 9:29 AM 3 comments:
Email ThisBlogThis!Share to TwitterShare to FacebookShare to Pinterest

Springtime was finally here for the last race of the Snake. With no rain for a few days and temps in the high 60's/low 70's I knew course conditions were going to be excellent. It was do or die time.

After 5 months of training under Coach's guidance this would be my first real test. And with Willow Koerber coming, the stakes were even higher. I wanted to come within a respectable time of hers.

Although I was nervous, I managed to get a good night's rest. I also managed to get on the second row at the start. This time I was NOT going to have to pass 25 racers. I held back on the start, allowing time for my legs to "wake up." Still, it was hard not to go all out.

When I passed Zeke on the first doubletrack climb, he was motoring along very well, too. I told him to watch his back as Stanly was behind me. Well ... that may have been a tad bit of a lie (actually Stanly had started many waves back), but I wanted to push Zeke a bit as he was racing for first.

I entered the first section of singletrack with just one racer behind me and was able to go at my own speed and feel the flow of the trail. I popped out onto the gravel road and by this time had settled in to a good pace.

Soon after the first road crossing (around mile 13) as I thought I was moving quickly and smoothly up a gradual climb, I heard Willow behind me, asking to pass. Crap! I did not expect her to catch me this quick! Oh, well ... I gladly let her on by. Then I picked it up a bit and stayed with her. Amazing, she was so smooth and steady ... on a hardtail. She was really cool to watch. I managed to stay with her for a mile or so, until the trail pitched up even steeper. Knowing that I would explode trying to stay close, I settled back into my own rhythm and watched her grow smaller and smaller. (Are there any other sports where you can compete against one of the world's best?)

During the last climb before the sickenly sweet descent into the aid station which marked the halfway point, I began to hurt a bit. I began questioning my fitness, but after glancing at my watch, I realized that I was close to 10 minutes faster than January's effort. No wonder! Now, could I just hold this over the last 17 miles and perhaps gain even more?

As I rolled in to swap Camelbaks, Bruce told me that I was just 3 minutes behind Willow. That was encouraging. The next few miles rolled by uneventfully. I followed Garth's line down the Middle Mountain descent. Once I began going through the multiple creek crossings, I slowed a bit. All the rocks here seemed to be very sharp and "angry looking." Stumpy was handling well and I did not want any mechanicals now.

When I began the final doubletrack climb, I felt a painful twinge in my hamstring. What the heck am I doing having a cramp? I don't cramp, darn it! (The last and only time I have ever cramped during a race was Ouachita '08) I immediately dropped into granny and soft-pedaled. Thankfully, the painful tightening relented. I took it easy up this climb.

Once I entered the 6 mile rock garden, I slowly picked it up a bit, testing my hamstring. All seemed o.k. and this being my funnest section, I carved through the singletrack as smoothly as possible. Today I was able to clean sections I usually am too tired to on race day. And other sections I was smart enough to dismount and run through, knowing I would be quicker and less likely to cause another cramp.

Just before the gunsight pass, I saw a figure I did not expect too. At first I thought I was hallucinating. Loretta?!! What is she doing there? And then, a full-on cramp! Ouch, ouch, ouch! I yelled at Loretta, "You gave me your cramps!" (Later on, I found out that she had snapped her seat post around mile 12.) I had to run up through the rocky pass. Fortunately, I was able to remount and pedal the last 100 meters of singletrack.

Once I hit the final pavement descent, I tucked in to as aero a position I could get ... on a 5 inch travel bike. The final 50 meters I was able to stand and sprint and avoiding another cramp.

If Coach dials me in to my other races like she has for the Snake, it is going to be a fantastic year!