As athletes, we tend to be very in tune with our bodies.  If I only learned one thing from this experience, it would be, "Listen to your body when it is trying to tell you something, damnit!"

It all began back in August.  My signs were all very non-specific:  fatigue, mild power loss, bloating, and mild abdominal discomfort.  I thought the tiredness was due to an unbelievable brutal TransRockies and the GI issues due to the Paleo diet.  Coach backed my training off and my doctor could not find anything wrong on physical exam and routine bloodwork.

Although I was well rested for SM100, my body just didn't feel good that day and the legs weren't zippy.  Even Danielle made the comment that my pace was a bit slow.

Fast forward to October and the Pisgah Stage Race.  Once again, I was well rested.  So well rested I was almost fearful of losing some fitness.  Days 1 and 2 were good.  However, my body just died on Days 3 and 4.  Both Coach and I were like, "WTF?!?"

Soon afterwards, my symptoms increased in intensity, I began having some bowel irregularity, and I gained about 5 pounds.  I began to resemble Buddha.  I began thinking about everything from pregnancy to ovarian cancer.  So I went back to the doctor for more tests.

Bloodwork nothing, ultrasound nothing.  Mind you, docs like to do one test at a time so this was agonizingly slow and my patience was wearing thin.  Also, my primary doctor (I feel) didn't seem too concerned about finding an answer quickly.  Finally, the CT scan showed mild sludging in the gall bladder.

So the week before Christmas, I had a hida scan, which assesses gall bladder function.  Then I had to agonizingly wait through the holiday.  Well, yesterday I received the news.  Normal gallbladder ejection fraction = 80%.  Mine = 16%.  No gray zone there!

After 6 weeks worth of testing and waiting, I have an answer.  I almost wished I would have had the classical signs of gallbladder disease:  nausea, vomiting, and sharp pain.  I would have had a diagnosis much sooner.

Thinking positive about my situation, the good that has come from this is that I have lost the weight I gained initially and then some more.  Since the symptoms have intensified, I have not been able to eat much, and have been in a calorie deficit for 6 weeks.  I am now lighter than I have ever been.  I have also been doing more strength training than base training and I feel that I have maintained my strength.  But I will definitely have to work on my endurance after surgery.

Surgery is scheduled for next week.  I almost thought about asking my surgeon if he could remove a few unnecessary organs while he is in there; say, one ovary, uterus, and maybe one kidney.  You know, lighten the chassis even further.  As I know just about everyone at the Surgery Center, I will be in good hands.  My anesthesiologist is a roadie.  He told me last night that it will be a joy to work on me as a lot of his patients are >275 pounds and have cardiac/respiratory disease.

Doc says I will be off the bike for 3 weeks.  Translation:  3-4 days.  Any longer than that and he might have to prescribe Prozac!

I hate that I am going to miss the first two Snakes.   But I will just be glad to have a happy and healthy body again.

So, if you feel something is just not right with your body (no matter now small it may seem to be), be proactive and firm with your doctor about finding an answer.

Luckily for me, I have several mountain bike friends that are also doctors so I was able to consult with them.  At one point, I actually had to tell my primary doctor that I wanted an abdominal CT scan and NOT an endoscopy/colonoscopy.  Thank God he listened to me or to this day, I might not have had an answer.

Time to get off the computer and get to training while I still can ...
Posted by Carey Lowery at 7:52 AM 10 comments:
Email ThisBlogThis!Share to TwitterShare to FacebookShare to Pinterest
Labels: illness, injury

The latter came today and I had a 3 hour mountain bike ride planned.  Eager to do battle with Mother Nature, I laid out my riding gear last night with precision.  I was bound and determined to stay warm and dry.

One of my riding partners (who shall remain nameless) bailed on me this morning; something about being tired/worn out from not fueling properly during yesterday's ride and then having to attend two Christmas parties.  In all fairness, she did rearrange her schedule for me when I found out that I could not do this ride yesterday, when it was 45 degrees and sunny!

So, once again, poor Zeke came along to endure.  He is one tough cookie for it seems that alot of my training rides are done in less than ideal conditions ... MUCH LESS!

We decided to do an out-and-back on the last and most technical section of The Snake.  We could not damage this portion of the trail as it is just about all solid rock.  When we arrived at Dug Gap, it was raining and 37 degrees.  Conditions would not change at all today.

Now back in my younger (and much insaner) days as a veterinarian fresh out of vet school, oftentimes I would have my arm shoulder-deep up a cow's/horse's ass so that I could tell the farmer if she were pregnant.  No, I did not go in bare-handed; I used a rectal palpation sleeve.  This was a long plastic sleeve that went up to my shoulder.  Of course, that did not keep the manure off my boots, my cheek, or out of my hair, but it served its purpose well in that it kept my hand and arm clean. 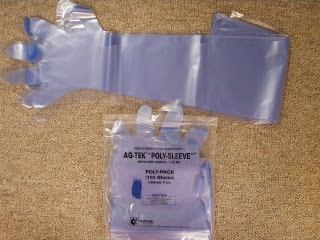 Flash forward 15 years to a potentially cold, wet, and miserable mountain bike ride.  I brought a few of these; Zeke calls them "limb condoms."  Placing them strategically on our arms and legs in between layers of clothing, our ride suddenly became very enjoyable and productive.

Today's ride looked like a scene out of J.R.R Tolkein's The Lord of the Rings.  We were enshrouded in a blanket of fog along the ridges.  I half expected to see a white unicorn appear or hear, "My precious!"  But other than a deer and a hiker with a pink umbrella, we encountered no other souls.

It was a good day to focus on skills as speed in these conditions would only get us hurt.  Zeke had already sacrificed some flesh earlier this fall on this trail.

We each rode along at our own pace; hard enough to keep warm, but not so hard that we would sweat.  I rode back to Zeke a few times, allowing me to practice on some of the rockier sections a couple times.

I managed to stay dry, but after 2 hours my feet got cold.  They were dry, but my shoes were not waterproof so eventually Mother Nature made her way inside and killed my toe warmers.  I need to work keeping my toesies warm.  I had two pairs of socks with the palpation sleeves in between.  These plastic sleeves then were placed under my tights and went all the way up to my knees.  The toe warmers were placed in between the outer sock layer and my shoes.  I wish I could have put the plastic layer on over my shoes, but with several hike-a-bike sections, they would not have survived.

With fresh hot coffee waiting for us in Zeke's van, we managed to make it back to the trailhead 3 1/2 hours and 20 miles later.  Mmm Mmm ... that coffee was soooo good ... and hot!

If today's ride does not make me stronger, I don't know what will.

I first rode a 29'r earlier this year.  A friend had a Superfly so I gave it a try.  Other than a perfect fit, nothing much else impressed me.  At the end of the ride, my back was killing me and my thighs were tired from all the standing.

Fast forward to October, the end of my season.  After talking to my Coach and telling her how I felt quite weak with my top end power, she asked if I had ever thought about SS'ing.  Well, yeah, I said, but dismissed it because I thought it would cause my knees to blow out and kill my back.  Coach said it would help my top end and improve my fire road climbing.  So...

The next day I called Bruce and within a couple weeks placed an order!

I used an old XTR crank and Bruce did some customizing.

The headset cap is eccentric just like the bottom bracket.


A set of Specialized Captain's mounted to Stan's Race Wheels will make for a stable and speedy acceleration.

Specialized Toupe saddle is lightweight yet comfortable.  Rebecca Rusch got me hooked on this model and I have never looked back.

"What doesn't kill you only makes you stronger" and "Pain is just weakness leaving the body"  are thoughts that I have put on replay the past week as I get ready for my and her virgin ride.  It will be interesting to see what name comes to mind as I ride her this Saturday.

Thanks to The Outdoor Store, Specialized, Magura, Ergon, and Endless Bike Co. for making this happen.  (I may be cursing you before its all over!)