This is my second time doing the Whole 30 Plan.  The first time was 2 years ago when my Mom and I decided to clean up our diet.  I learned alot about what food can do for you ... and to you (both the good and the bad).  Since then I have been grain free, dairy free, mostly legume free (aside from soy lecithin and an occasional spoonful of peanut butter), and additive free (nitrates, nitrites, sulfites, MSG) except for carageenan which is found in almond and coconut milk that comes in cartons.

I have been the healthiest and fittest ever!  So why do another Whole 30, you may ask?

I need to take a sugar detox.  In the past two months and especially on my non-cycling days, I have slowly been increasing my daily intake, mostly in the form of dark chocolate and stevia.  According to the American Heart Association, the maximum amount of sugar a woman should eat is 25 grams per day.  Initially, I had been sticking with this recommendation (on my non cycling days).  But here lately that number has been in the 40's - low 50's.  The sugar monster must be destroyed!  FYI, one 12 ounce Coke has 40 grams of sugar.

I have been experiencing sleep maintainance insomnia.  I have no problems falling asleep, usually by 9:30 pm.  But I am waking up around 3-4 am and cannot fall back asleep.  I have done all the recommended things:  no sound, no artificial light, taking melatonin.  Nothing is working.  So maybe it is something in my diet.

I have been experiencing more fatigue than what I think I ought to, given my training/racing.  By the time I get home after working all day, I am absolutely whipped.  All I want to do is eat dinner and curl up on the couch.  This might be normal given the stressors of daily life, but I want to make sure it is not related to food.

I occasionally have some GI disturbances, mostly in the form of bloating and decreased motility.  I had discovered certain foods that cause this:  garlic, onion, and brussel sprouts.  These vegetables fall into a category known as FODMAPS (Fermentable Oligosaccharides, Disaccharides, Monosaccharides and Polyols.  These carbohydrates are incompletely absorbed in the GI tract and can be easily fermented by gut bacteria.  These sugars also exert an osmotic effect, increasing fluid movement into the large bowel.  The fermentation and osmosis caused by these undigested sugars can lead to gas, bloating, pain, and diarrhea.  Whereas in the past I had these foods on a daily basis, now I must limit them to both in quantity and frequency.  But I still am experiencing some GI issues and am wondering if it could be related to any non Whole 30 foods.

So today was Day 1.  No big deal.  The second time is going to be alot easier than the first.  What I distinctly remember from the first time was the feeling of power!  That I was not a slave to the sugar monster.  Of course, I also remember the lowest point, too.  When, during week 2 I decided to pre ride the Southern Cross route and almost did not make it to the top of Winding Stair.  Talk about bonking!

I recommend trying this if you are having any sort of digestive issues, unusual aches/pains, low energy levels, seasonal allergies, skin issues, or have an emotional addiction to food (which is usually junk food).  It is only 30 days ... and it has the potential to change your life, forever!

Posted by Carey Lowery at 8:54 PM No comments:
Email ThisBlogThis!Share to TwitterShare to FacebookShare to Pinterest
Labels: nutrition, Whole 30

This past weekend I ran into ProGold Bikes Bruce at the Oak Ass 100/50 in Birmingham, Alabama.  He asked me to determine how long one application of lube would "last" on my bike.  How many miles can you go?  As I usually determine my time on the bike in hours rather than miles, I told him I would put the lubes through an official test.  Seeing as how I don't even go through 1 four ounce bottle in a year, I knew that the answer could potentially involve many training rides.

So today, I readied two bikes:  a road bike and my Niner Jet 9 RDO.  First, I cleaned each chain with a "new to me" ProGold product.  Chain Shine is a biodegradable citrus-based cleaner.

Just use a small paint brush to apply, let sit a few minutes, take a scrub brush, and voila!  And it won't harm your precious carbon bits.


After drying, I applied ProLink to my road bike and Xtreme to my mountain bike.  Only 1 drop per link is all that is needed. 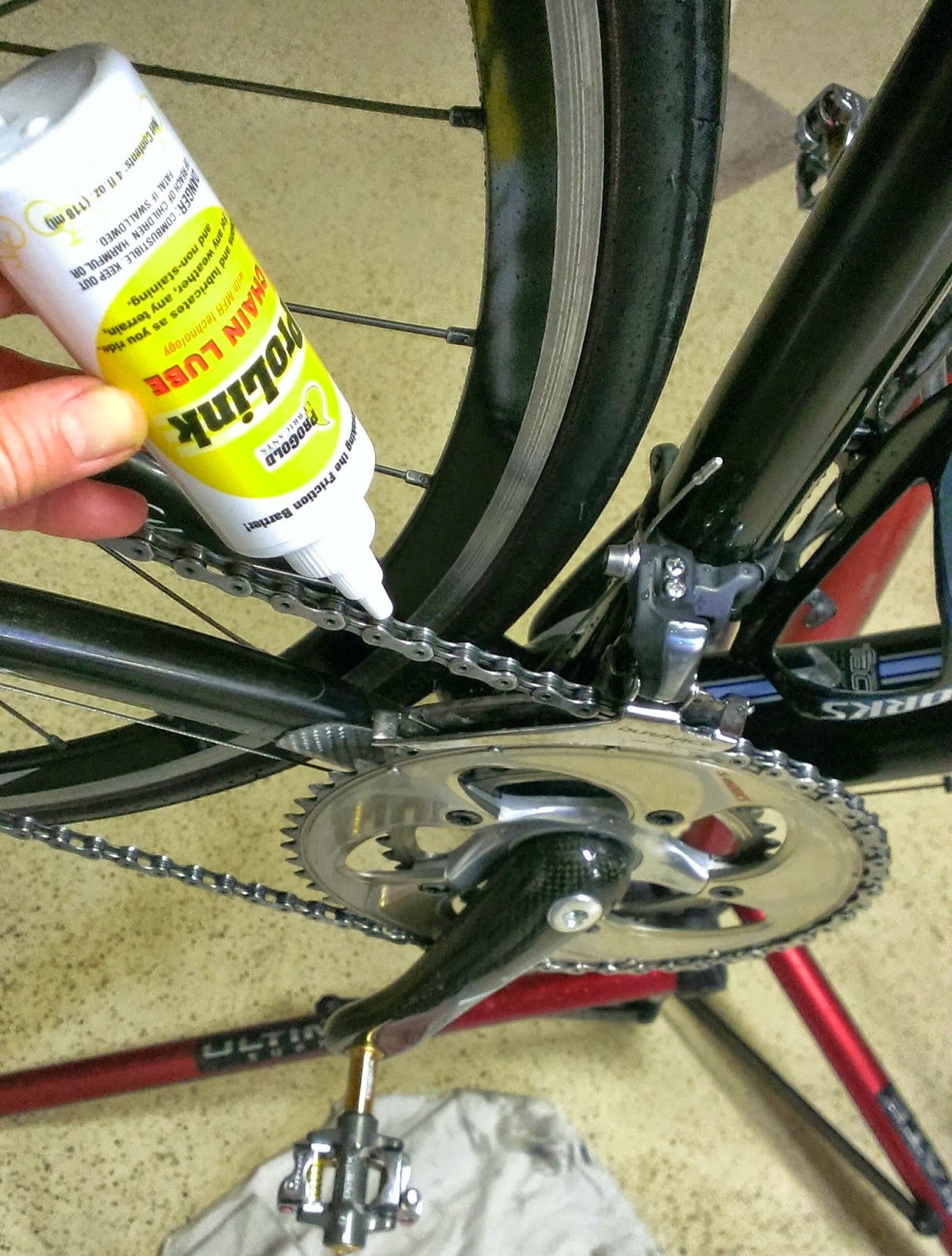 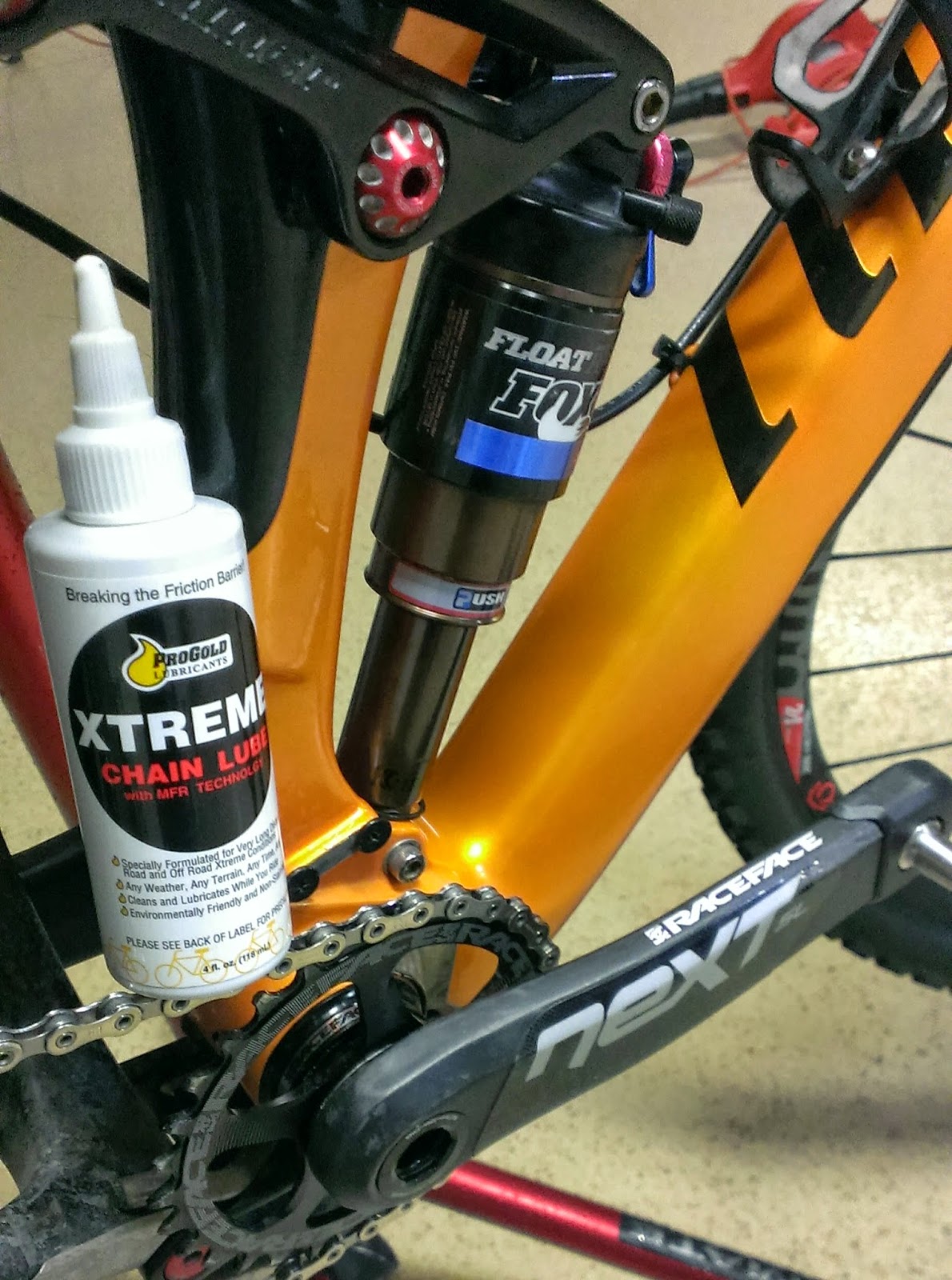 I will be keeping track of the hours (and miles) that I put on my steeds over the next month or two.  I will also make notes of the conditions that I ride in.  During this time I will not do any sort of cleaning to my drive train, but I may have to put some Bike Shine on the frame.  After all, I am a little OCD about keeping my bikes clean.  Once the drivetrain starts making noise or shifting becomes less than perfect, the test will be over.

Back in October when I signed up for this, I knew I did not want to race solo.  I started asking friends if they wanted to race a duo with me.  All my team mates save for Lisa had other plans.  Lisa was sorta in until she pedaled her body into the ground and was forced to take a 2 week rest period.  Ursula was out as she was still nursing an injury.  Loretta was interested, but then broke her arm.

So, I was left with no other choice ... Zeke.  Now all I had to do was to convince him how much fun it would be to ride in circles, on a team nonetheless.  You see, Zeke is an epic kind of guy.  Tell him to go big, go long, go hard (on a course that does not repeat itself) and he is as happy as a pig in poo.  But he was done racing the hamster wheel events.   What I had going for me was:  1.  that it was me asking, 2.  it was a new trail system, and 3.  he could do as many laps as he wanted.

He agreed ... to two laps.  Whew!  That meant that I only had to do four.  Since there was no single speed team division, we settled for coed.  We definitely had some competition.  Zeke was concerned of letting me down, but I told him that we were out here to have fun, and wherever we finished up, I was completely o.k. with that.  It had been a long season and I just wanted to finish it up not completely annihilating my body.

Saturday morning was frigid!  As I traveled from my house to the start of the race, the temperature slowly dropped 8 degrees.  Why is it that the Dry Creek parking lot, which is also the start of The Snake, is the coldest place in Georgia?  I needed to do a warm up, but was not wanting to brave the wind chill, so I kept it short, a mere 15 minutes.  I had just recently read an article about how long warm ups can be your undoing.  Not for me; I know that my body needs a solid 30 minutes to come to life.

Here is my account of the race, lap by lap.

Lap 1:  The flat parade lap up the fire road and around the parking lot sent me spiraling backwards into the field as my legs were spun out at a cadence of 130rpm.  I had unfortunately brought the wrong legs today; I had left the single speed ones at home.  The ones I had on were my geared legs and they did not like the gear I had on my bike.  I noted that there were 4 climbs that were particularly taxing with the gear I chose.  There were two fun and fast descents with whoop-de-doos.  I caught air, looked fairly graceful, and managed to not nose-wheelie myself off into the woods.

Lap 2:  I motored on through the transition zone.  The second lap felt easier.  Less traffic and knowing how hard I could push through the loose corners contributed to a smoother rhythm.  Around mile 4, I caught up to Star, the 2nd place team.  I passed her and then kicked it into a higher gear.  I had 6 miles left to gain as much time as possible.  The race for second was going to be close!  I rolled into the transition zone giving Zeke a 3 1/2 minute buffer.

Lap 3:  Zeke's first lap.  I was ready to go back out in case Zeke had an issue and couldn't do 2 laps in a row.  I crossed my fingers as I did not want to go back out so soon.  I could tell as he came through, finishing up his first, that he was giving his all.  59:08!  My team mates said that he hooted and hollered and sounded like he was having a grand time as he passed by them.  I hope I have half that much energy at 66.

Lap 5:  Oh, the legs were barking going up that first climb!  After 10 minutes, they finally decided to cooperate ... a little.  What what !?! The 4 grunty climbs had turned into 6!  And they had gotten chewed up over the last few hours.  Now it took body english as well as muscle to keep the rear wheel from losing traction.

Lap 6:  Where is my competition?  I was trying to do the math, all the while laying down the power with a body that was beginning to fade and wanting to be done.  I needed to catch Star by mile 8 to have any sort of chance of us getting second.   At the 7.5 mile mark, I caught sight of the Motor Mile jersey up ahead.  Come on legs!   I asked my legs for just a wee bit more and by some small miracle they responded.  I passed Star and continued to ride like a scalded dog.  Two more climbs and one descent and I would be done.  The legs and lungs were burning as I crossed the finish line.  Second place was ours! 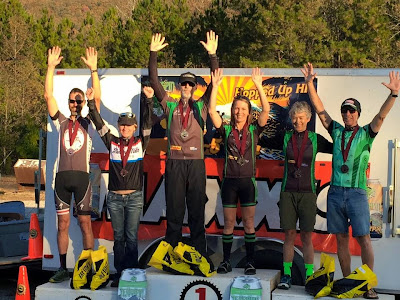 A huge thanks to the Ricky Manis and other NWGA SORBA members for getting this trail in tip top shape.  All the leaves and the loose gravel on the steeper climbs were blown off.  The cooperation between Chainbuster Racing and the local SORBA chapters has been awesome this year.  For all the Chainbuster races I have done, the trails have been perfect!