Todd might as well call it the Marji Gesick 100K now.  I think it originally started out with 50 miles, but with the constant additions over the years, it is now really 60 miles.  Having done the 100 miler three times, I decided to reward my efforts by doing the shorter version.  It was still going to be #doinghardthings, but the suffering would not nearly last as long. My team mate, Dave, had made the trip over too, and was racing the "50" as well.

New this year was the start in downtown Marquette, near the Ore Dock.  Score for us, as the AirBNB I had gotten us, was 5 blocks away.  This race is a point to point, so the evening before, we took Dave's truck over to the finish in Ishpeming.
I had no expectations other than finishing and maybe getting a sub-8 hour time. I was riding my Trek TopFuel, with a 120mm fork, a 28T chainring, a 10-52 cassette, and all AXS baby!  Believe me, when I tell you the last time I did the Marji, I got tendonitis in my thumb from shifting so much.  AXS has been a game changer for happy hands.
For once, the weather forecast got better as game day approached.  The course was dry and the starting temperature was 53 degrees, with a high of 75.  It was nice not to have to think about what to wear for once.  I opted to go with just a bottle at the start and had my CamelBak at Jackson Park.
There was plenty of time (2 miles) before we headed into single track, so I took it easy and opted NOT to go out "greyhound" style.  There was madness at the front when the gun went off.  Everyone jockeying for the greenway pole position.  I just sat on wheels, conserving, until my heart rate started to soar and then I backed off, popping off the lead group.  I saw maybe 3 ladies up ahead, but when the Marquette Mountain climb began, I lost sight of their position. No worries, as the day was going to be long and the course tougher on the back end.
Off Grade was the first section of single track.  I was glad to have pre-ridden because there were some uphill techy bits that I was able to work my way through without burning any matches.  I was not wanting to open the matchbook before Jackson Park.
Pipe Dreams, the second trail, was so much fun.  Straight and downhill, what more could you ask for in a race that supposedly had "no free trail."  Short-lived, however, and then I was onto Easy Street and the Pioneer Loop, which was tight, twisty, and rooty.  I was with a couple of fellas, Kevin and Caleb, with whom I would end up going back and forth with them, as well as a few others whose names escape me, for most of the day.  I was glad to hear that Kevin had his sights on 8 hours as well.
Once onto the ORV trail, I was thinking I was golden: legs feeling great, nutrition going well, and I was in my happy place.  But I completely forgot that there was 5 miles of this "Luciferous" sandy doubletrack.  After 30 minutes of this nonsense, I burst onto the smooth surface of the Iron Ore Trail.  A fellow racer and I worked together over the next few miles to Jackson Park.
Pulling into the park, the "no official aid station" staff jumped to my aid and had my cooler pulled out into the open. I quickly donned my CamelBak and swapped out gel flasks.  My race day nutrition consisted of Skratch and Torq and Hammer gels.  No solids for me, as they tend to just hang out in my stomach and ferment all day long.
I headed out for the round 1 of Marji madness.  I continued to meter my pace and fellow racers Kevin and Caleb caught back up to me.  I let them pass as I had to make a slight adjustment on my CamelBak, followed by removing a derailleur killer soon thereafter.  At times, I felt like I was going too slow, but the  Old Guard kept reminding me, "Conserve now or die later." 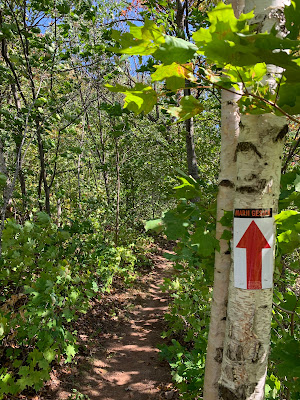 Racing back down off the knob, onto the pavement, and along finisher's alley, I rolled across the mat with a time of 8:14.  Fully stoked with how my day went, I presented all 5 tokens (including the #unfinishedbusiness one I got at packet pick up) and chalked up another hard earned finish (in the daylight, for once).  The finishing cake was heavily iced 15 minutes later, when, after getting cleaned up, I found out I had won.  I suppose I was just chasing ghosts or perhaps had gotten ahead of them at the Jackson Park aid station. 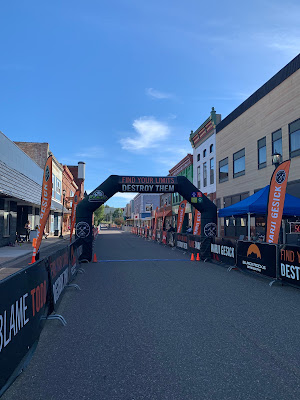 Dave Jolin also managed a 3rd place in the Master's field.  To him goes a big chest bump, as he was competing against guys that were 10 years younger.  So proud of what he accomplished, as he also took the NUE Marathon Series win!

What a helluva day!  I never had so much fun doing hard things.  And thanks to the hundreds of volunteers, official and unofficial, who helped make my day a little less hard.  You guys are the unsung heros.

Those who finished, whether it took 6 hours or 40 hours, are all winners.  And to those #quitters, let that hashtag fuel your redemption for 2022!

Hands down, the best 100 miler and 100k out there.  And to think the Marji Gesick materialized 6 years ago when #blametodd and #blamedanny wondered about a summertime event they could come up with.  If they had known how many lives that would change for the better, they woulda washed those crazy thoughts down with another beer.

Cheers to you, Todd and Danny 🍺