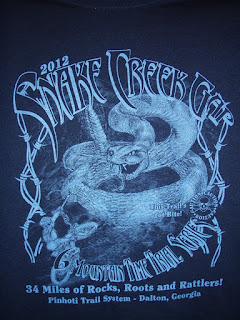 8 years running, 298 racers present, the only race with a women's record-breaking bonus (that I know of), 57 degrees in January ... what more is there to say about starting the 2012 season!

Nervous?  Heck yeah, I was.  This race was going to gauge my fitness 2 months post surgery.  I know my coach knew what was needed to do to get me back on track, but after a less than stellar 20 minute power test a couple weeks ago, I was lacking confidence in myself.  With my 43rd birthday looming, had I reached my performance peak?  Or with all that transpired last year, maybe the climb back up was going to take just a bit longer.

I was going into this race carrying some fatigue from the previous 2 weeks' training.  Knowing this, I was just hoping for a sub 3:45.  With an unsettled forecast, I packed just about everything, from shower cap to embrocation to mud fender, hoping that if I prepared for a deluge, it would not happen.

The start was a balmy 52 degrees.  Cloudy, but no real threat of rain ... awesome!  I was one of the first to go off the line so I had a clear path before me.  With my legs achy and barking, I rode conservative at first, hoping they would come around by the time I hit the first single track.  They didn't.  Granny was my best friend for the first 13 miles.

Once I reached the ridge of Horn Mountain, my legs woke up.  Finally I was able to go!  Those final miles down to the aid station at Snake Creek Gap parking lot flew by.  In the parking lot, I swapped Camelbaks and started the long arduous climb up Mill Creek Mountain.  By this time, I was able to happily stand and hammer.  Although I was on gears, I rode that climb like I was on my SS.

The miles leading to the last techy single track went by uneventfully.  The double track climb up to the last 8 miles was smooth and fast!  It is so nice not having to pedal through energy-sapping red mud.  The last 8 miles are usually pretty fun for me as I love dancing through the rocks.  However, having not ridden much single track in the past two months, my skills were rusty, and it showed.  I bumbled most of the way, running more sections than I wanted to, but knowing I would be faster on two feet as opposed to two wheels.

As I popped out onto the pavement for the last downhill stretch, were my eyes playing games with me?  Could it be?  Finally!  In all the years of doing this race, I have never been able to find some big racer dude to pull me down the mountain.  Today was my day!  I raced up to him, latched on, and sped down the pavement faster than I ever had gone.

Once again, the NWGA SORBA folks put on a wonderful event.  See you back in March.  There is a bounty that needs to be collected!
Posted by Carey Lowery at 5:11 PM No comments:
Email ThisBlogThis!Share to TwitterShare to FacebookShare to Pinterest
Newer Posts Older Posts Home
Subscribe to: Posts (Atom)