I had the pleasure of using this for the first time this winter and early spring.  This product comes in two levels of heating:  warm (suggested for 70 degrees and below) and hot (suggested for 50 degrees and below).  It comes in an 8 ounce tub and has a creamy, non-greasy formula.  I chose the HOT as my legs/knees can handle temperatures above 50 degrees in their naked form.  And I hate to wear anything more than just shorts when on the road bike.  Tights and leg warmers are like "straight jackets" for my lower extremities.  I feel all bound up and cannot move freely nor generate the power comfortably.

As these embrocations are in tubs similar to Chamois Butt'r Eurostyle, measures have been taken to ensure that one does not get these products mixed up ... which could be painfully disastrous!  The labels and lids are red, and the embrocation itself is orange in color.

I recommend applying it at least 30 minutes before you are ready to ride.  You don't need much; a two-finger dollop will do.  One tub lasted me almost two months.

Warm legs and knees makes it so much easier to get into the groove with my training.  By the time I headed out the door, I was feeling a tingly warmness.  This "barrier" made the temps feel at least 20 degrees warmer.    And to me, that can be the difference between a "dead leg" session and a "sparkly leg" ride.

Immediately upon finishing a ride, I take diligence in removing the embrocation.  There is nothing like stepping back inside a warm house and having your legs "on fire" to get you moving to a source of soap and cool water.  Warning:  don't step into a hot shower without removal first!

If you don't have soap and water readily available, I recommend this.

This is great for removing the embrocation as well as just cleaning the dirt, sweat, and grime off you.  All of these products are Made in the USA, too!  You can find out more info at Paceline Products.

As much as I hate the cold and wet of winter, I can take some comfort in knowing that this embrocation will make it a little more bearable.  Can't say that I am looking forward anytime soon to using this product again.  I am kind of enjoying the jersey and shorts weather and not having to think about what to wear.

This year all my 6 hour races are Coed Duo, save for this one.  This course is so much fun (think pump track + rollercoaster + flow trail) that I did not want to share.  Solo on a single is how I came to play.  Feeling strong I decided to go a bit harder this year with a 33 x 21 as opposed to the 32 x 21 I ran for the last two renditions.


The weather could not have been better and the trail crew once again amazed me with all their work.  The  course was about a half mile longer this year due to a re route.  The start was flat pavement (a single speeder's nightmare) and my race almost ended before it began as some "flying incompetent" about took out my front wheel with his rear wheel as he came around me.  Really? Did that almost happen? This is what I was thinking as I shouted a choice word or two at him.  Everyone around me heard it, too, and gave me room to breathe.

Lap 1:  Typical start for a 6 hour.  I got to practice my trackstanding abilities whilst the gearies clicked it down to granny on the climbs.  I also went through a series of L6 efforts passing those who raced the initial pavement like a crit, only to blow up mid way through the lap.  Lets just say that this lap was a 1 hour and 18 minute warm up.  At least Kip was there for most of it to fill me in on what his fam has been doing the past year.

Lap 2:  Some breathing room finally.  I was able to hook up with a few other single speeders and get into that 1 gear groove.  Although there is about 1300 feet of climbing per lap and 3-4 climbs of some length, I was saying to myself, "Climbs, what climbs?"  As I rolled through one of the pavement intersections, I was told I was the first female.  That was reassuring as, up until now, I had no idea where I was in the female field.  Now, just to keep the pace up, the ladies behind me and start reeling in the men.


Lap 3:  Still feeling good, i.e. "What climbs?",  I began to have some twinges in my hamstrings.  It was only in the upper 50's and I was fueling well, so it could only be I was pushing a harder effort than what my body could deal with.  I took it down a notch, settled in, and those "pre-cramps" went away.  Disaster averted.  It was still my fastest lap.

Lap 4:  I was cruising behind Cam (Kip's team mate) enjoying his pace, when his rear wheel lost traction around a corner.  He managed to save it, or so I thought.  But then an instant later, his rear wheel was up IN MY FACE.  How Cam managed to go from a rear tire slide to a full-on endo mystifies me, but I had only a second to decide if I was going to eat the tire or else.  I chose the "or else," grabbing his wheel.  I managed to stay upright as our bikes interlocked, and we both came to a stop.  Me, on my two feet, holding Cam's wheel, and Cam on the ground, but at least it was not head first.  It took a moment for us to untangle (think Twister, but with bikes). After seeing Cam get up and brush himself off, I left the scene.  Not knowing how far second was behind me, I kicked it into high gear ... no, wait.  I did not have but one.  I kicked it into a higher cadence for a bit to make up some lost time.

Lap 5:  This is the "Where did those climbs come from? lap.  I came upon a single speeder in a green and pink kit on a Kermit green Niner.  I like a guy who is not afraid to wear pink!  Brett was his name and he was on a good pace, so I just stuck to his wheel and enjoyed his lines.  I told him that if they gave time bonuses for style, he would get at least 3 minutes.

I always try to get in a XC mindset on the last lap, urging my body to get up to XC speed.  It is funny how I always think/feel I am going faster this way, but when I look at my lap times later, it is always the same speed!  Well, as I was in this mindset, Brett began to slow on the climbs.  I encouraged him to wick it up by saying, "Can I get around you?"  Sho' nuff, he hammered harder, dropping me, but after awhile I reeled him back in.  Jokingly, I said, "Don't make me have to pass you!'  He laughed, but his gas tank was empty, and he let me on by.  We must have rode about 1/2 of the lap together.  A great lap with a good guy.

I managed to get in 5 laps and 68 miles just under the 6 hour mark.  A great day on the bike.  Thanks to Shanna and Endless Bikes for a stealthy quiet drive train.  I swear her cogs make me 5% faster.

Zdenka had an awesome race and came in second.  Brenda Simril, despite a hard crash on the first lap, still managed to podium.  The best compliment I received that day was from Jon Stang, as I passed him on the final lap.  He said, "There is no shame in being passed by you."  Thanks, Jon, for that encouragement.

The prizes and cash were overflowing the podium bags.  But the best prize of all was this: 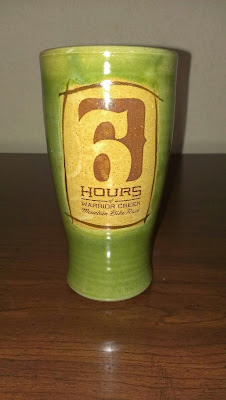 This race just keeps getting better.  If you have not done this one yet, put it on the list for 2014.  But sign up quick, as it sells out in minutes.
Posted by Carey Lowery at 5:07 PM 2 comments:
Email ThisBlogThis!Share to TwitterShare to FacebookShare to Pinterest
Labels: Endless Bike Company, racing, single speed
Newer Posts Older Posts Home
Subscribe to: Posts (Atom)