The Devil Went Down to Georgia 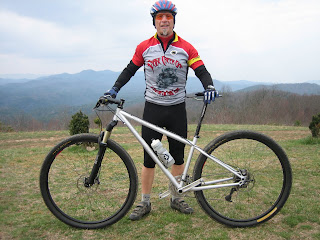 ... he was looking for a soul to steal. He was in a bind cos' he was way behind; he was willin' to make a deal. Well, Zeke came along; he knew what was goin' on, and invited him home for a meal. Afer a burger and fries, the Devil began to realize that he was no match for Zeke's faith. In his frustration, he ran off and left his Bandersnatch.
And so that is how Zeke ended up riding a 29'er and since has converted to the Big Wheel. I must say, I was skeptical about Zeke's decision to go big. Especially since his previous bike was a 5 inch travel Epiphany. But after riding with him last week and listening to him rave about its handling and speed, I guess I was wrong. I only hope he continues to enjoy it, especially after our journey to Arkansas next week to race the Ouachita and then ride the Syllamo.
The change is even to my benefit as I got a sweet deal on a set of DT Swiss 190 hubs and Stan's ZTR rims. With this I will even be able to shave some more weight off Stumpy.
Posted by Carey Lowery at 8:08 PM 4 comments:
Email ThisBlogThis!Share to TwitterShare to FacebookShare to Pinterest 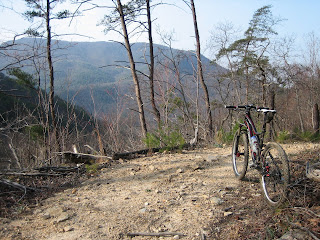 I left my family early this morning at 6am, sleeping soundly, while I decided to welcome the day on Starr Mountain. I explored Coffee Branch Trail and Chestnut Trail. As I was climbing up the doubletrack, I was able to watch the moon set and the sun rise. Absolutely beautiful. Listening to the birds singing and watching the trail appear as rays of light came through the trees brought back memories of my 24 hour races in 2006. Those first laps at daybreak were the best.

These trails are horse trails. I had ridden Coffee Branch before, but not its entirety. Today these trails were in good shape. It looked like the USFS had recently done some work on them. Kudos to the Forest Service as I did not have to climb over any downed trees on Coffee Branch and just a few on Chestnut. Chestnut had a technical rocky uphill and a furiously fast rocky downhill. This is a good trail to prep for TransRockies.

Thankfully the worst of my bronchits is over. Not much coughing and definitely easier to breathe. I hope it will be completely gone this week. Ouachita Challenge is approaching fast and I woul really like to be at my best for this one. It is one of my favorites (=lots of rocks!)
Posted by Carey Lowery at 8:28 PM 1 comment:
Email ThisBlogThis!Share to TwitterShare to FacebookShare to Pinterest 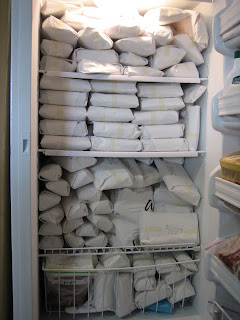 The respiratory bug that I acquired during CRBC really hit me hard this week. What with long hours at work and wheezing/coughing when I would try to get my heartrate in the 150's, I decided to give my bike a rest.
I was excited to see our homegrown, hormone and antibiotic free, black angus arrive this week. Charlie's parents raise angus and each year they butcher a steer for us. It only costs us the kill bill, which, in this case equated to $.40/lb. So now I can work on improving my iron stores.
Tomorrow Stumpy and I are going to see how I fare riding the horse trails and fireroads on Starr Mountain. Looking forward to a sunrise start. Then the family is off to watch 10,000 BC. Carly is all about prehistoric animals. Don't think she will care too much about the love story though. Oh, well, isn't it all about special effects anyway?
Posted by Carey Lowery at 5:37 PM No comments:
Email ThisBlogThis!Share to TwitterShare to FacebookShare to Pinterest

Danielle, Namrita, and I have been planning a little training camp for the past several months, with a 6 hour race thrown in the mix of riding singletrack and fireroads in Tennessee and Georgia. We have been talking about how hard the 6 hour will probably be after several hard days in a row and that whoever wins amongst us will be the "training camp sandbagger."

So the plans were for Danielle to come down this past weekend and ride the Cohutta 65 route with me. Well, after the unfortunate mishap with Big Red, a Saturday arrival was questionable. Then she tells me something about how the bad weather in Michigan has slowed everthing down and that Big Red was not going to be fixed in time. But her mother was going to let her drive her van down on Tuesday.

Just yesterday Danielle emails me that her mom's van broke a strut, but that she bought a little car to make the trip. A Ford! at that. Uh oh!

So I do another long ride today, 5 hours and 50 miles of fireroads on Kimsey Mountain. I call it the La Ruta route because it has a little pavement, some railroad tracks, a trestle crossing, steep gravel roads, and some mud thrown in.

I come home, clean up, make dinner, and await Danielle's arrival. I expect it to be around 8 pm. Well, she calls around 7:30 pm, saying something about how on her way through Ohio she noticed that one of the tires was splitting and that she had to make a stop at a tire store to get a new one. And that as she was about to leave the mechanic noticed that the other rear tire was mounted backwards!

So now her arrival will not be until after 11pm ... at least two hours past my bedtime. Yes, I am an early bird; I have a 5 year old, so I go by her schedule in order to get a good night's rest.

At last, I see Danielle's scheme. Wear me out before we even get started! Let me put in 2 hard rides, go to bed late, ride hard for 3 more days, then race. Danielle probably took a 3 hour nap somewhere in Ohio so she could be well rested for the next 3 days. Then put an a$$ whoopin' on me at the 6 hour.

But I plan on counter-attacking! Little does Danielle realize that Carly's room is directly above hers. I bet she does not plan on getting up a 6 am ... he!he!he! By the time she reads this it will be too late.
Posted by Carey Lowery at 9:03 PM 3 comments:
Email ThisBlogThis!Share to TwitterShare to FacebookShare to Pinterest 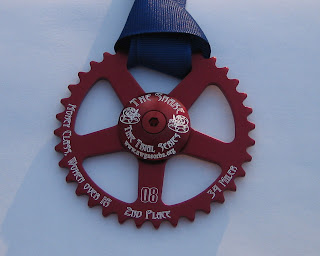 Yesterday was the final race of this year's series. Prior to the start, I was concerned with just holding on to third in the women's money class. It had rained all day on Friday so I knew the conditions were going to be a little sloppy. However, it was sunny and warm and I was actually feeling good about today. I was also riding Stumpy, trying her out for the first time in a race. Being a half pound lighter than my Epic and having ridden her a couple days ago on the last technical section on the race course, I thought this decision was pretty much a no-brainer.

I was lucky enough to be in the fourth wave off the start so hopefully I would not have to expend too much energy passing people. Immediately my legs felt "snappy." Oh, yeah, today is going to be good! Then I hit a section of doubletrack that the Forest Service had worked on ... just recently. Their idea of trail work usually involves heavy machinery. I bogged down in the thick mud but managed to stay upright and pedal out of it. I was not about to lose a shoe to the goo! Luckily there was only about a 1/4 mile of destruction, but I still used up a lot of energy fighting it.

The first 6 miles of the race was the sloppiest, but then the conditions improved tremendously. Most of the remaining trail was dry, thanks to the awesome trail work of the NWGASORBA crew. I was setting a good pace and lovin' the downhills. The extra inch of travel was just soaking up the bumps. I even got several compliments by the guys on my descending skills. It has taken several years of practice and better suspension, but I am finally not afraid to go fast.

Looking at my computer as I rolled in to the aid station at the midway point, I saw that I was 15 minutes faster than last month! Holy crap! I knew I was rollin' but ... but wait, my odometer was only reading 12 miles and the midway point was at mile 16. My computer was way off so I looked at my watch and saw that I was only 5 minutes faster. O.K. that is more reasonable.

Now I began to realize that I just might be able to improve my placing. I was the first woman through the midway point, but I knew that superspeedy Jamie Dinkins was somewhere behind me. She currently held first place after the fastest time in January.

Starting the climb after the aid station, my legs still felt great, and I was able to maintain my HR in the 170's. As I topped the climb, I looked back down the mountain and saw Jamie. I estimated her to be about 2 minutes behind. I managed to hold her off until we entered the last technical section. About a mile in she passed on a climb. I knew she had started at least a wave behind me so my chance of a first place was gone. But I stuck to her wheel hoping that I could pull of a second. I stayed with her for a couple miles. I was equal to her on the rocky descents, but she is such a strong climber. This is where she was able to pull away.

The last 2 miles of singletrack I was in oxygen debt. I ended up running a couple tricky sections because I knew I would be faster and less apt to hurt myself. I pushed myself so hard that as I popped out of the singletrack onto the road for the final 1 1/2 mile descent, I hit a pile of rocks and just about went sliding across the asphalt.

I finished with a time of 3:47:10, knocking off 5 minutes off my February time. Good enough for 2nd place. I was satisfied! Jamie improved on her time as well, finishing in 3:43 and some change. The under 23's better watch out for her; she is going to do some damage this year at the national races!
I have been doing this race since its inception in 2004. It just keeps getting better and competition fiercer. The NWGASORBA club works hard to ensure a great race. On Friday, in the rain, they had to walk the course, with chainsaws, and move at least 7 trees that had fallen in Tuesday's windstorm. The post-race food was tasty! They even had homemade peach cobbler!
This is a great winter series training race. You all should come down and see what it is about in '09. You will not be disappointed.
Posted by Carey Lowery at 7:46 AM 4 comments:
Email ThisBlogThis!Share to TwitterShare to FacebookShare to Pinterest
Newer Posts Older Posts Home
Subscribe to: Posts (Atom)