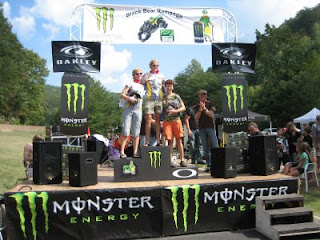 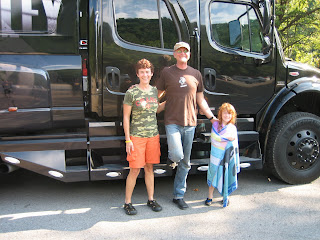 Whew! That was a tough one. This race covered all the singletrack at The Whitewater Center, including a 2 mile paved climb and a 1 mile fireroad climb. It was approximately 40 miles. I wasn't sure how my legs would be, but I found out pretty quick as I missed my starting wave by 30 seconds. I pulled an Ursula on that one (inside joke). Jumping from a HR of 110 to 180 hurts! Anyway, I immediately knew that would be counterproductive, so I settled into my own rhythm, knowing that I had the whole race to reel my competition back in.
So as I watched the field ahead of me slowly pulling away, I noticed a few began popping off, including a rather tall guy on a Fisher. Not good for the Fisher team, especially since Mr. Gary Fisher himself was here for this race. I reeled him in and latched on. He pulled me to the singletrack where he graciously allowed me to get in front. Nice guy, I thought. (More on this story later).
I felt like I was a Super D racer today. The legs felt good on the downhills and short power ups, but any sustained climb was just brutal. I was like a 3-legged moutain goat, struggling to maintain an even pace on the climbs.
Finally during the last 10 miles, I began to feel good again. But it was too little too late. I ended up third, 2 minutes off 2nd place.
The best part was having Carly there saying, "Go Mommy, go!" Zeke and her were my pit crew today, handing me bottles along various sections of the course. Even though I was having a bad day, Carly made me smile. She was so cute in her little Castelli cycling cap.
While reliving the race with Zeke and Carly, Zeke asked if I knew who pulled me up the paved climb. I said some poor Fisher guy who popped off the front. Zeke said, "That poor guy was Gary Fisher!" Oops! Oh well, everyone looks the same when in their racing kit.
Congrats to my inspiration, Loretta Simpson, for winning the Expert class. And kudos to Susie Council for her first race back from a broken leg, to Nancy Fields for a personal best and to Cathi Cannon for finishing strong. All the women out there looked strong! Good job, ladies!
And thanks to Zeke. Carly said she enjoyed her "piggyback" rides.
Posted by Carey Lowery at 7:36 PM 4 comments:
Email ThisBlogThis!Share to TwitterShare to FacebookShare to Pinterest 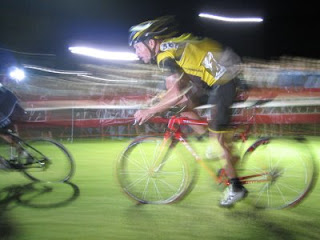 Who knew that two days of walking the floors of the Sands Convention Center would be harder than a hundie? My shins are sore, my feet are going numb, and my back hurts.
I managed to meet up with quite a few companies. I have good vibes after talking to their marketing/sponsorship directors. Zeke "pimped" me up. I am anxious to see what happens for '09. I think it was good for them to meet me so that they can put a face with my proposal. And with Zeke's storytelling capabilities, they should not forget me!
CrossVegas was my first time spectating a cyclocross race. To me, it's like a short-track race on road bikes. Their was only two barriers on the whole 3-4K course. It was not technical; more of a power course. It was amazing to see how quickly the lead group broke free of the pack. And stayed this way until the very end. Lance showed up and raced ... he seems to be doing it all these days. I think he managed to get a top 10 or 15. I did not stay for the men's finish as it had been a long day for me and I wanted to escape the mass exodus.
It was good to see friends that I have not seen in a while: Krista, Danielle, Tim, and Rebecca to name a few.
One more day; I cannot wait. For this country girl, Vegas is just too much for me. It is sad that people have to come here to have fun. I want to see the beautiful green mountains of Tennessee. When I get home, I think I will need to shower in Clorox!
Posted by Carey Lowery at 7:16 PM No comments:
Email ThisBlogThis!Share to TwitterShare to FacebookShare to Pinterest 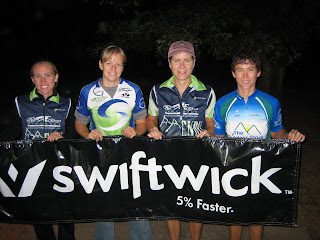 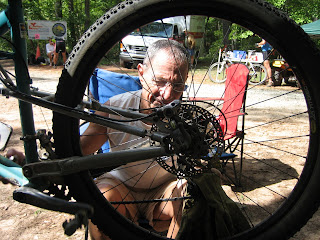 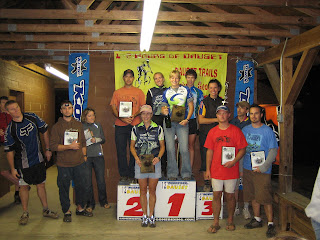 Never give up! After 12 hours of racing, it came down to the last lap. Throughout the day, we had been sitting 2 to 9 minutes down on Team Monkey Butt. There guys were just a bit faster than us, cranking out the day laps 1-3 minutes faster. We were able to always reel them back in when they sent their woman out, as she was much slower than us. However, she did only 2 laps, so by the time night fell we were back in the hole, about 5 minutes back.

I went out on the second to the last lap. Lisa came in on her final lap quicker than I expected and I had not seen Monkey Butt's man go out just a few minutes prior to Lisa's arrival, so I thought that we were in the lead. And the plan was that if I was ahead on my lap, I would pull a double. So I hammered that lap. With two HID's blazing away, I was able to maintain my speed.

I was thinking that whole lap that I was going to have to race the final lap as well, so I was in the consevation mode, trying to carry my momentum through each and every little twist, turn, and descent. I came through the transition area just two minutes slower than my day laps.

But then I saw Kim all geared up and ready to go. Suddenly I was confused, but handed off the baton to her. Lisa was there and then I learned that we were still 5 minutes behind.

Oh, well. It was then I settled for a 2nd place. You always have those thoughts of, "What if the opposition was to have a mechanical or crash? It could happen." But it rarely does. I got cleaned up and packed up. Then we went to the finish to wait on Kim.

After Kim had been out on the course for 50 minutes and Monkey Butt for 55 minutes, we began to fidget and wonder. The minutes kept rolling by and no sign of our competition. Oh, sh!t, could they have had some problems. We began to have a slight glimmer of hope that 1st place might be within our reach.

But Kim was late as well. She should have turned a 55 minute lap, but there was no sign of Kim. Then Lisa said that if Monkey Butt was having trouble out on the trail, she hoped that Kim had not stopped to help.

Talk about nerves. Lisa was chewing her nails and keeping close tabs on the minutes ticking by. I was straining my eyeballs as each rider approached, hoping that it was Kim. Julia's heartrate was probably higher than it had been out on the trail.

Then a rider came through with just a handlebar light. It couldn't have been Kim, as she had both a helmet and handlebar. But wait! It was Kim! Holy cow! We won! We sounded like a bunch of 14 year old cheerleaders hootin' and hollerin' as we rushed over and gave Kim a big hug.

Monkey Butt had double flatted and Kim had passed him on the last lap. Then her helmet light died so she had to slow up quite a bit to see the trail.

Just 5% faster was all it took!
Posted by Carey Lowery at 11:44 AM 3 comments:
Email ThisBlogThis!Share to TwitterShare to FacebookShare to Pinterest 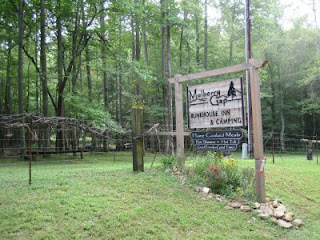 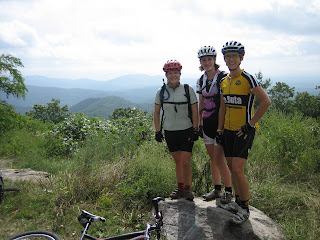 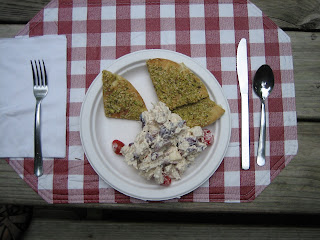 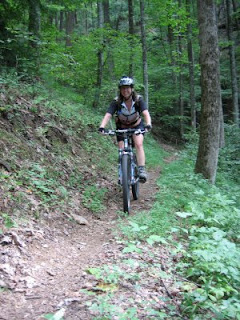 What a fun and relaxing weekend! Riding with women that have the same passion as I. I met some new friends, had a great time on the trail, and ate the best food ... EVER!

We were able to ride out our cabin door and even had a good warm up on the fire roads before hitting some sweet singletrack. We rode Bear Creek, and Pinhoti 1,2, and 3 over the course of 2 days and 3 rides. We covered 53 miles.

Our hostesses, Diane and Ginni, treated us like family. I have never felt as comfortable and as at home as I did at Mulberry Gap. No TV, no phone, no radio, no internet, just nature at its best! And Ginni is the best chef, one who loves to cook and make people smile the minute they take a bite! The trails were great, but I was always excited to get back to camp and see what Ginni and Diane had prepared.

My food favorites were the chicken salad, pita crisps, and the berry cobbler! I am going to give it a go at the grilled peaches sometime this week ... if I can find some decent ones.

Thanks to Debbie, Sarah, Nancy, Beth, Tina, and Namrita for such a good time. We need to do this again!
Posted by Carey Lowery at 8:44 PM 3 comments:
Email ThisBlogThis!Share to TwitterShare to FacebookShare to Pinterest

As Close to Transrockies As It Gets

Since there will be no "unofficial FireWater 50 ride/race" this year, Zeke and I decided to tackle the course yesterday. I had ridden every trail on the course save for Mountaintown. From the stories I had heard, it wasn't going to be pretty.

From the get-go, it was straight up for a mile or so on the lower section on Windy Gap. This immediately brought back memories of the "3 Bitches" from Day 6 of TransRockies. You know, the kind of climbing where you really have to lean over the front of your bike to keep the tire in contact with the ground.

Milma was no biggie. Tibbs, on the other hand, was an uphill rocky grunt of two miles. I had ridden this once last year and walked several areas. But this time I was determined to clean it all ... and I did. With the heat and humidity soaring, I had a steady drip of sweat from my nose. I even had to take my glasses off as the flow of sweat overran my eyebrows and started running down my lenses. Nice!

From there we took the fireroads over to Mountaintown. Now, from what people have told me, it was a slick, gnarly, rocky, multiple creek crossing kind of trail. At least it was mostly downhill. I enjoyed the hell out of it! I think most people tended to blow this way out of proportion. Or maybe it was due to the fact that the creek was low, but most (80% for me) of it was rideable. I did have some dabs, falls, and walked the "slicker than snot" algae covered rocky creek crossings of which I do believe there were two.

What I do believe has happened is that my perspective for riding in Tennesse and Georgia has changed since TransRockies. After riding, slip-sliding, and hike-a-biking Canada's singletrack, the trails here are a lot more doable.

After Mountaintown, it was then on to Bear Creek and Pinhoti, relatively smooth and flowy. Then the grunt back up Potato Patch. Definitely hurting here; probably due to the fluid outflow exceeding the fluid intake.

Finishing off the ride was the descent down Windy Gap. Whoo Hoo with a pucker factor of 9.5! I was able to clean all of this save for one dab and one short walk through two large boulders. I just could not find a line that would spare my derailleur and tibia. The pucker factor occurred where the trail started moving underneath you on a pitch of about 15%. Lots of loose cat-head rocks that were trying to slowly push you off into the ravine.

We ended up with 50 miles and 7500ft of climbing. Now that's TransRockies style of riding!
Posted by Carey Lowery at 2:56 PM 1 comment:
Email ThisBlogThis!Share to TwitterShare to FacebookShare to Pinterest
Newer Posts Older Posts Home
Subscribe to: Posts (Atom)