I do believe Thomas Turner and I are the only members of the "Raced the Snake Every Year" Club. It has evolved over the years, from the first edition (2005) that was raced "backwards" from Dug Gap to Dry Creek to the addition of a 50 miler in 2016.  I am quite partial to the 34 miler, which is where I first cut my teeth on rocky technical terrain. 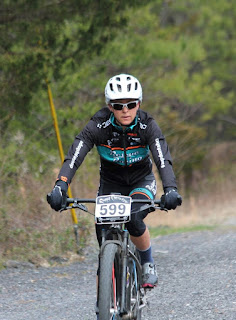 The February edition would be remembered by a Top 10 List, not necessarily in any particular order.

1.  The Polar Vortex was taking refuge at the Dry Creek parking lot.  Damn that wind was brutal!

2.  Realizing I forgot my DynaPlug on the bus ride to the start.  Like forgetting your driver's license: chances are you will not need it, but it makes you more cautious than you would want to be.

3.  Sitting next to Josh on the shuttle and listening to his friendly banter of nervous energy.

4. It was nice to see that ALL of the bridge was above water.

5.  Seeing Angie Childre's tiny little cog on her bike as we were climbing up to the first section of single track and thinking she was in for a rough day.  So happy to be spinning a 23!

6.  Honcho calling out my alter ego's name, Carol, who is my favorite character on The Walking Dead.  Definite bad ass!

7.  Dismounting and leaping over the 29'r wheel-swallowing clay crevice, passing two dudes in the process.

8.  Having a friendly and encouraging exchange with a fellow racer as he was fast on the descents and I was a wee bit stronger on the climbs.

9.  Accomplishing my goal of a sub 4 hour finish and 1st SS overall. 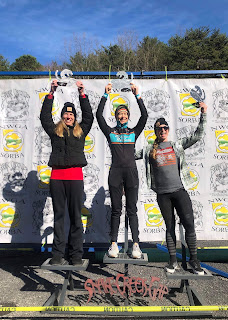 Fifteen years of racing this tough as nails course.  If NWGA SORBA can continue this amazing event another 15 years, I will be there!
Posted by Carey Lowery at 7:47 PM No comments:
Email ThisBlogThis!Share to TwitterShare to FacebookShare to Pinterest
Labels: Snake Creek Gap TT 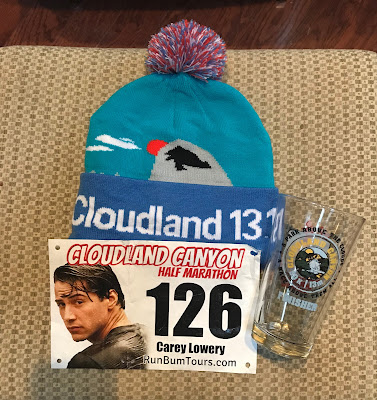 When I woke up at 6 am to the pitter patter of sleet on my skylights, I just wanted to crawl back under the covers.  I rolled out of bed, feeling the day before in my low back and legs, checked the weather app on my phone, and grimaced.  Damn you Paul Barys ... you said the ice cold rain wouldn't be happening until the late afternoon.

What I had laid out the night before to run in was out the window, and I had to rethink my attire.  I ended up just stuffing a crap ton of clothing in my bag, grabbed my Yeti mug of Christopher Bean Coffee, and headed out the door before any more negative thoughts could swirl around in my head.  I had paid good money for this ass whippin' and I would endure the suffering.  Like a crack addict, I needed that endorphin high.

8 years ago, I had developed a severe neuropathy in both feet, as a result of bilateral Morton's neuromas and loss of the fat pads in the bottoms of my feet.  I had surgery on my left foot, but it did not fully resolve the issue.  It wasn't until I was custom fitted for orthotic inserts that my feet slowly began to heal.  5 years ago, I thought I would never be able to run more than a mile.  And here I was with the opportunity to test myself with a 13.1 mile trail race.  Come hell, high water, or freezing rain, I was not going to pass this up!

As I drove down to Georgia, the temperature dropped and the rain picked up.  By the time I got to the venue, it was 35 degrees and raining.  I walked the 1/4 mile from where I parked, to the group lodge, grabbed my race bib, and walked back down to my vehicle.  During that 30 minutes, I must have went through 20 clothing combinations.  I finally settled on a "kit" that had me wearing more wool than a sheep.  I topped it off with my Vapor Trail 125 beanie, giving me the self confidence to see this race through with grit, gristle, and gumption (Scott Harper's version of triple G).

I lined up mid pack. While a lot of racers had packs on, I opted to run with just a 12 ounce hand held and 1 caffeinated gel. The rain was light but steady.  I watched as racers S-L-O-W-L-Y made their way out of the warm lodge.  With no telekinetic super powers, I was doomed to watch their sloth like gait, as I shivered uncontrollably.

The race started out on a 3.5 mile section of park road that undulated.  I made myself take it easy as I had just raced the Snake Gap TT 34 mile on my single speed the day before and my longest training run was 10 miles.  At first I was worried that I was going too hard because within the first 1/2 mile I made my way up into the top 15 or 20.  But after the first mile when I saw my time and heart rate, I knew my pace was sustainable.  And my legs felt unbelievably great!

Heading out on the trail, I followed in the footsteps of Stephanie, who had done this race before.  She was very steady on her feet and consistent with her pace.  I opted to follow her and learn a thing or two. The West Rim Loop Trail was very technical with lots of rocks and roots, but not much elevation change.  Despite replaying in my head, "Pick your feet up," I managed to take a tumble, and lose about 1/2 of my fluid as it squirted out onto the trail when I put my hands out to break my fall.


Despite the rain, the trail was not slippery.  The wet rocks had plenty of traction and my Vibram soled Hoka's prevented any Bambi-like splits.  No views of the canyon today, what with the cloud cover and being too fixated on the trail immediately in front of me.  Stephanie and I had several guys pass us just before we began the out and back on Waterfalls and Sitton's Gulch Trail.  Everyone was very respectful when they made their pass.

I was now beginning the run down the canyon, which included a 600+ step man made staircase.  I took it easy on those metal steps; I did not want to go head over heels.   This out and back was 6 miles total.  My quads were taking a pretty good beating on the descent.  I used my arms as much as possible to decrease the pounding my legs were taking.  I also had to be very watchful of the sections of cat-head rocks so that I would not roll an ankle.  During the last mile to the turnaround point and the aid station, I began to see runners on the return.

I high fived, fist bumped, and shouted out words of encouragement.  Some had good poker faces while others were showing the effort of running back up out of the canyon.  One racer said that he thought we were the 4th and 5th woman.  I couldn't believe it; surely he had miscounted.  Stephanie replied, "4th, 5th, and 6th."  I was confused; what did she mean by that?

At the aid station, the volunteers were amazing.  One took my water bottle and refilled it, while I pulled out my gel and inhaled it.  Stephanie got a head start out of there, but I was able to catch back up to her.  After about 1/2 mile, she began to slow, and then mentioned that she was 10 weeks pregnant.  Ahhh!  Now I understood why she said what she said earlier.  I told her she was amazing and to finish strong.  I then slowly began to pull away from her once the trail pitched up.  The next 2 miles were painful, what with the 1000 feet of elevation gain.  I made a conscious effort to pump the arms and run or at least power hike.  "Walking is for the weak" was my mantra climbing out of the canyon.  I began picking off racers right and left; this fed my desire to go even harder.  My breathing was ragged, my glutes and quads were screaming, and at one point I experienced tunnel vision.  Whoa!  I backed off a wee bit.


Towards the top, there was a mandatory short out and back to a waterfall.  It only took about 3 minutes, but I ran it twice due to a combination of oxygen debt and thinking that perhaps I had missed someone at the falls who was writing bib numbers down to prove that we had indeed done that section.  I back tracked until I saw another racer and he confirmed that there was not anyone at the falls, that it was an honor system for this out and back.  So that cost me a minute or two. I could only laugh at myself; this wasn't the first time something like this had happened, and I am pretty sure it won't be the last!

The last mile I was running on fumes.  The short bit of paved walkway on the Overlook Trail was brutal on my feet.  I struggled the final 1/2 mile climb up to the finish.  I had indeed emptied the tank, crossing the finish line in 2:12:47. Sean Blanton, the race director, was there to greet each and every one of us as we crossed the line.

I was super stoked at my performance.  I felt like I had crushed that course, despite the weather and my previous day's effort.  It wasn't until I went inside the lodge and saw the finisher's board that I was 5th woman.


I want to give a big shout out to Sean.  He assembled a great group of volunteers who braved horrid conditions to ensure we had the best race possible.  The course was well marked with plenty of confirmatory taping.  There was mounds of post race food.  I never would have thought I could have so much fun racing in precipitation that was just a degree or two from becoming snow.

And thanks, Stephanie, for being an excellent pacer/teacher.

I am already perusing multiple trail running sites for my next one!
Posted by Carey Lowery at 8:31 PM No comments:
Email ThisBlogThis!Share to TwitterShare to FacebookShare to Pinterest
Newer Posts Older Posts Home
Subscribe to: Posts (Atom)