Entering 2022 with the Biggest Athletic Goal Yet 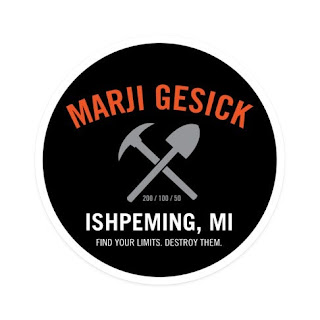 If you had asked my former self back in 2011, after having dealt with a foot neuropathy and subsequent Morton's Neuroma surgery (which yielded less than ideal results) would I ever be able to run again, I would have said, "Unlikely, unless being chased by a bear."  Fortunately, seeking a second opinion (which I should have done PRIOR to electing surgery) and finding Dr. Tracey Pesut, a orthopedic foot/ankle specialist, who didn't recommend surgery but rather custom orthotic inserts, after 4 years, my feet had healed enough to start the process of running again. Why would I decide to run, you may ask?  For one, to see if I could, and two, for cross-training, improving HAB skills, and to keep me bonez strong, aye!

In 2019, with 3 months of training and the day after I raced the Snake on my single speed (why the hell, you ask?  because I can!), I raced the Cloudland Canyon Trail Half Marathon in 35 degree rain.  And managed a respectable 5th overall.  It was hard, but never would I have thought running would be so much fun!

This past August, I ran the Ubaye Trail Half Marathon in Barcelonette, France.  Kip prodded me into it, saying he would do it with me, then bailed.  This was a true couch to 14 mile race and I paid the price, both with suffering the last 6 miles and dealing with left patellar tendonitis ever since.

And so, when I raced the Marji Gesick 50 this past September, I resembled a human being afterwards, and not a hollow shell of one that has happened the 3 times I have done the hundred miler.  Lisa Randall asked me soon after I finished if I would ever think of doing the hundie again and I said, "Hell, no!"  But that damn buckle continued to haunt me.  When Todd released news of the 1000 mile buckle, I told myself that is something I could make happen.  Just 4 more hundreds (cuz 2022 would count double mileage) and 1 more 50 mile version and the buckle would be mine.  It would be a 5 year plan.  That desire in me to do hard things kept rearing its ugly head on the drive home from Marquette.  By the time I had arrived home after a 17 hour drive, I was tired and delirious.  Perhaps that contributed to my decision to try and get that damn buckle in 2022, by racing the Marji Gesick Duathlon: ride the first 65 and run the last 40.

Have I fucking lost my mind?!?  Pretty much!  My longest run has been 14 miles, and now I think I can do 40 ... after riding my bike for 65 miles on some of the hardest single track this country has? Challenge accepted.  I live for this!  Crushing limits, pushing farther than ever, embracing the pain cave, seeing what this 53 old body can do.

But I am not stupid, either.  I have got a plan ... that started 3 months ago.  2-3 runs/hikes/walks per week to start a slow build and get used to the pounding that running places on your body.  Mind you, I have also been dealing with a low back facet arthropathy that has me in pain quite a bit.  Stretching, chiropractic adjustments, and the occasional steroid injection helps.  I also had the RFA procedure (radio frequency ablation) that is supposed to kill the nerves and provide long term (to permanent relief).  Well, I suppose I have nerves of steel, as I fell into the low percentage category of it being ineffective ... meh.

To add insult to injury, I also hit menopause in 2021.  Talk about a full body slam!  Where did all the watts go?  Why is my ass growing?  And when did my bed turn into a sweat lodge?  For you men, the equivalent would be castration and your testosterone dropping to a big fat 0!  While HRT has helped, it is just not as good as what your pre-menopausal body can produce (in the way of estrogen, progesterone, and even testosterone).

But with all that, I talked to my Coach, Lynda Wallenfels, to help me out with the training aspect.  She recommended Mike Schultz, owner of  Highland Training, as he has much more experience with athletes that both bike and run.  Lynda has been my coach since 2009.  I have much respect for her, both as a person and a coach.  While a bit hesitant to leave her, I trust her.  I talked to Mike yesterday for a solid 30 minutes.  He has over 20 years of coaching experience and a wealth of sciency knowledge. I am excited to say that he will be coaching me for 2022!  If anyone can turn this cyclist into a part-time runner, he can.

To jumpstart my training, I have joined forces with some of my cycling friends and co-workers to do the Whole 30 in January.  For those of you who do not know, it is 30 days of no sugar (real or artificial), no grains, no legumes, no dairy, and no alcohol.  It will be a great cleansing experience and I hope to rid my body of any lingering inflammation, as well as just feeling better all around.  Being celiac, intolerant (to some degree) of dairy and legumes, and not liking alcohol, it won't be as hard a jump as for my friends.  Chocolate and I have a loving relationship, so this one will hurt.

And I am also competing in my local gym's Result Resolution for the month of January.  Because why not do all the hard things during my birthday month. 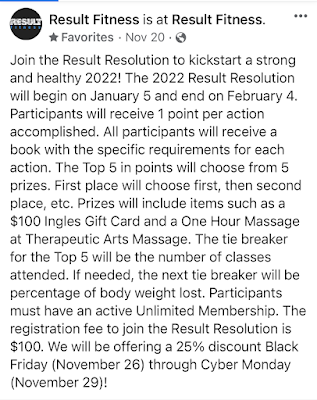 I am hoping that Coach Schultz, the Whole 30, and Result Fitness will kickstart my ass into being the fittest (and happiest) I come September 24, I will have the day of my life riding and running some of the hardest damn trails in the United States.