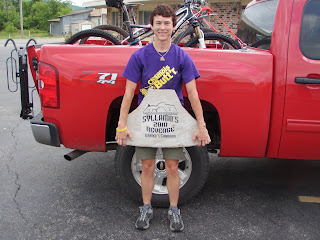 The night before the race did not go quite as planned.  Zeke and I invited Lindsey over to our motel room for dinner.  We had the most wonderful time getting to know her.  Then Todd called and told us to turn on the TV.  When I did, there were three tornadoes heading our way.  And then the tornado sirens started.  Wow!  Never heard that before.  Needless to say, the three of us spent an hour in the bathtub with a mattress over our heads.  Poor Zeke, in the shower with two women, at the same time, but with clothes on!

A few more wicked storms blew through during the night, but on race day, it, was pleasant outside.  Thankfully, the front that was supposed to stall on us bringing more rain Saturday moved on over to Nashville and then stalled.

The start is crucial.  A mile double track climb at 10% gradient and then the single track begins which is very tight and difficult to pass.  I did a 30 minute warm up so that I would be ready for a fast start.  Last year I entered the single track in poor position.  This year I wanted to be up with the leaders.

When I lined up, I thought I was on the first row.  But racers kept stacking up in front of me and pretty soon, the start was 30 yards up the road.  There are no call ups for this grassroots race:  every man for himself. Ready, set, go!  350 racers headed towards 50 miles of single track bliss.  I treated the start as a 10 minute TT.  I slowly weaved amongst the crowd and made it into the single track in the top 20.  Zeke also had a good start and won his own little race, which was to beat me to the single track.  However, he was wise enough to pull to the side and let me enter first.

The Yellow Loop (Jack's Branch Tr.) was in amazingly good shape, considering the 2" of rainfall the night before.  I opted to put the mudfender on and was glad as this kept my line of sight crystal clear.  Toward the end of this loop, I ran into a group of guys who I will collectively refer to as "The Bumbles."  I am sure they are at every race, but just more prominent here on the technical rocky trails of the Ozarks.  The Bumbles raced to get around me, some of which nearly hit my front tire as they cut back in front of me.  Then they proceeded to go no faster, essentially clogging my field of view.  Now a couple Bumbles did manage to slowly ride off the front.

As we turned onto the Blue Loop (Scrappy Mountain Tr.), the single track became much more technical with lots of mud, rock gardens, and large slabs of flat rocks just slightly off-camber, which when wet were super slick.  At this point I smartly backed off the Bumble train.  One by one, over the course of this trail, they flailed about on the rocks, doing spectacular endos, face plants, and smack downs.  Quite entertaining!  I maneuvered around the carnage.

I stopped at the first aid station only long enough to have my number plate marked.  Then I was off to enjoy the Green Loop (White River Bluff Tr.) and the Orange Loop (Bald Scrappy Tr.).  These are the most technical of the race. The Green is like the last ridge line section of the Snake but only half the length.  A lot more rideable this year and a joy to do battle with a couple more guys on this one.  The beginning of the Orange has a 1 mile steep descent then slowly climbs back up with a few short, steep pitches separated by false flats.  But all of it is like riding in a rocky creek bed with a few large rooty areas to negotiate.  I was lucky enough to ride behind Zdenek, a gentleman from the Czech Republic who now resides in Missouri.  "Z" had great lines and I could not have descended any faster than that.  I distinctly remember last year that there was water flowing down this descent.

The climb back up to the Blue was easy as I was still quite "sparkly."  I was able to stand and mash when needed and sit and speedily spin as well.  Once on the Blue, I encountered the first creek crossing, about 20 yards long, knee deep, and refreshing.  I missed the left hand turn onto the single track that paralleled the creek, but was able to bushwack back down to it after pedaling 50 yards on a gravel road and knowing that this was not right.  Some guys weren't so lucky and had to back track much further.

I rolled into Aid Station 2 (25 miles in) at the 3 hour mark.  Todd was there and I swapped out Camelbaks and gel flasks.  Thanks, Todd!  From there it was back onto the blue and another creek crossing, which was ride-able.  Then the heinous climb of death, about 1 1/2 miles of ascending back up the bluff.  Lots of wet, slick rocks, switchbacks, and finally the Stairway to Heaven.  This is a series of flat rocks in stair step fashion that takeyou up through a rocky crevasse and back on top of the mountain.  I was thankful for the running Coach has been having me doing, because it made the hike-a-bikes so much easier.

On this last section of the Blue, I finally caught up to the last Bumble.  I could see him about 50 yards ahead on some of the rideable sections of this climb ... well, at least for me.  It appeared that he was fighting his bike more than riding it.  After going down hard a few times, I finally caught up to him.  And this is what he said,  "I'm not so good on the technical sections, but I will probably catch you on the flats."  As I passed him, I replied, "Just let me know when you want around."  And I never saw him again.  Well, I did briefly, as the trail came out onto a logging road which was about 0.3 miles long and climbed slightly before jumping back onto more single track.  He was about 40 yards back on this "flat" section.  I put the final nail in his coffin when I dropped it into a slightly bigger gear and disappeared from his field of view.  I mean, really, would he have said what he said if I had been a guy?


At this point, there were 18 miles left and most was pretty buff.  Feeling frisky, I kicked it up a notch and settled into a rhythm of hammering the flats, railing the curves, and using my friend momentum to crest the small hills.  I flew through the last aid station.  14 more miles!  Unlike last year on the Red Loop (Bad Branch Tr.) where I was riding on a bed of sticks and having to yank them out of my spokes and derailleur every few miles, this year it was in perfect shape.  The Red had very little elevation change so I continued to hammer.  However, at miles 37-42, I think I paid for my earlier efforts.  I seemed to stall and a couple guys came around me.  Even the small hills hurt.  I sucked down the remaining gel in my flask, drank some fluids and waited.  30 minutes later, I started to come around and was able to pick it back up for the remaining 4 miles.

Finishing up the Red, I was directed onto the Yellow and the volunteers shouted, "Two to go!"  How I loved to hear those words.  I dug deep and hammered up the final climb, popped out onto the double track where just a little over 5 hours ago I was time-trialling up.  Screaming down this road at 35 mph was much more fun!  I rolled under the finish banner in 5:16, first woman, and good enough for 8th overall.

A wonderful day to race, with blue skies, finishing temperature of 75 degrees, a Specialized Era that kicked trail, and a body that was at its best.

Unfortunately Zeke had a day of troubles:  two flats and two knockdowns.  I guess he did not escape the Bumbles.  As he was not having fun anymore, he pulled the plug at Aid Station 2.

Thanks to Steve and crew for putting on an awesome event with the coolest trophy ever, weighing in at 36 pounds!
Posted by Carey Lowery at 9:16 PM
Email ThisBlogThis!Share to TwitterShare to FacebookShare to Pinterest
Labels: races, Specialized

Bumble should be thankful that he was only passed, and not run over

Great race report! Was wondering what gear u would run or recommend one to run on a single speed for the syllamo's revenge race?