A Kitten With a Contract 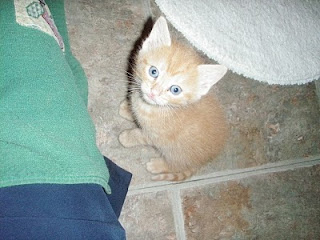 A couple months ago, I decided it was time for another cat.  Carly had been wanting one since Angel had died last year.  With spring upon us, I figured now was as good time as any and there would be a bigger selection.  I had not been fervently searching, but just waited for one to "fall in my lap."  For me, those are the ones that turn out wonderful.  It is hard to really know what you are getting into when picking a kitten and I did not want to get stuck with a "demon from hell."

So last week, Carly spent the night with Stefanie while I was racing Syllamo.  I asked her if she would check her barn loft for any kittens as I knew that "old broken leg" was residing there and it was kitten season.  Amazingly, when they did check, they found four 5 week old kittens that did not hiss, spit, and run away, but came right up to them unafraid.  Now that was a sign!  There were 2 tabbies, 1 torti, and 1 orange.  Another sign as our favorite cat color is orange.

We picked Sunshine on Tuesday night.  Using my amazing motherly powers, I was able to get Carly to change his name to Sully -- he he!  He is currently residing in Carly's bathtub while we transition him to the litter box and solid food.

It has been since 1988 since I have had a kitten.  A kitten is a lot of work and responsibility, especially if you want them to turn out right.  So I made Carly sign a contract. 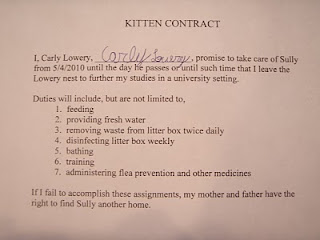 No, not cruel and unusual, but responsible.  Although, as I was writing this up, I was thinking, "And I thought my parents were hard on me!"  I think I just one-upped them.  This has already gotten Carly off on the right foot.  She has been an excellent mother, going to bed just a wee bit later and getting up a wee bit earlier to take care of Sully.  She is doing all of the above and then some.  She has even been wiping his bottom after he eats to stimulate him to pee and poop.  It has made me very proud to see her in action. (Don't tell Carly, but I have already gotten attached to the little bugger, so he won't be going anywhere.)

I have also decided to apply this whole virtual pet Webkinz thing to the real world.  Sully will be Carly's financial responsibility as well.  I purchased the first bag of food, litter pan, litter, and toy.  But from now on, she will buy what he needs.  She will be able to earn money by doing chores around the house, i.e., vacuum, dust, unload dishwasher, weed the flower beds, etc.  Charlie wanted lawn mowing and washing/waxing his truck, but I do think she is a bit young for that.  Sorry, Charlie!

I guess I will see how this experiment unfolds.  Should be exciting! 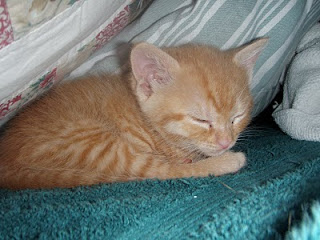 That is great that you are teaching Carly responsibility. Maybe we'll actually get a dog when Jayden is a good bit older and can take care of one (because I know I don't have the time).