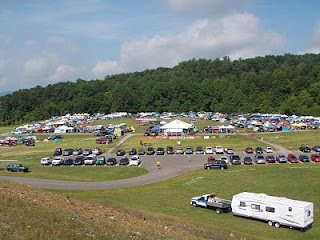 This 24 hour race was near perfect.  But I guess it is darn near impossible to reach perfection in a race of this magnitude.  Zeke was able to secure a pit area close to the wood line where racers exit the single track and make the parade loop around the venue to the Start/Finish area.  I arrived a bit later Thursday evening, 2 days before the race.

On Friday, we worked to set up the pits and waterproof it as best we could.  Yes, I, aka The Tennessee Tornado, did not forget to bring the inclement weather.  We double staked the EZ-Ups and bungeed a tarp to their tops.  We were sandwiched between good friends, the Boone Bike brigade and the Clyburn posse.

I then went back to the hotel and lounged while Zeke rode the OVT.  Mom and Doug arrived Friday evening, we ate my home cooked meal, and then went over the pit crew duties.  It was more of a refresher course as all present had pitted for me at the 2009 Cowbell Challenge.  Mom was eying my Oreo cookies; I knew she was making calculations as to how many potential cookies she could take and still have enough for me.

Around 8pm, the thunderstorms, wind, and hail showed up.  The cell was primed for a twister, but none developed.  Unfortunately for a lot of racers, their EZ-Ups were turned into twisted sticks of metal.  Ours survived, however.

I slept well, having already committed myself to riding in rain and mud.  Saturday morning was foggy; the forcast was calling for a chance of more violent thunderstorms in the afternoon, but for now, the sun burned the fog off and blue skies greeted the racers at the Dark Mountain trails.  After eating breakfast, we drove over to the venue. 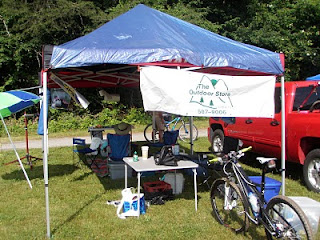 Time seemed to fly by as we were prepping the pit area and the bikes.  At the racer's meeting, Jason announced both Cricket Butler and my fund raising efforts.  I had a "bag o schwag guess how many laps I will race" contest and made some additional $$$$ for the schools.

At noon, we were off.  First I had to run around the venue, about 1/3 mile.  I took it easy to keep not only my feet happy, but to keep from trashing my legs.  The first lap is always a train anyway; no sense in killing yourself on the run and then having to come to several complete stops on the trail.

Jason decided to make the first bit of the race spectator friendly.  He mistakenly forgot to take down a piece of tape half way up the double track climb.  So instead of going all the way to the top and then dumping into the single track, 90% of us went up and dumped into the new section of single track and ended up riding it backwards back down to the Start/Finish area.  That was an extra mile's worth of work.  Plenty were upset because they and I did not know how many in front of us went the correct way (we later found out that everyone save the back of the packers had ridden that extra bit.  I was upset for about 1 minute.  I quickly got over it as there was still 23 hours and 48 minutes left to race.  No sense wasting precious energy whining like a three year old when what was done was done.  As far as I am concerned, that's just racing.  It is not like any of us are doing brain surgery out there.

The first lap was difficult only for the fact that I was resisting going into greyhound mode.  I still ended up riding a bit harder than I should have.  I was racing with a PowerTap ... a good way to keep me honest.  There is a water/checkpoint station halfway through the lap which is a really good idea.  Thankfully I never had the need to stop.  As I came by the first time, someone shouted out that I was in third place.  At this point in the race, I was really not wanting to know my placing as I was afraid that might incite the greyhound in me.

At the end of the lap is a dual slalom style descent.  A series of big-bermed "S" curves where you can let go of the brakes and hang on to your bike for dear life.  For me, a little reward for completing each lap.

The first lap had a few muddy spots, but overall the trail had held up extremely well under the torrential rains the night before.  Kudos to BMCC for the awesome trail work!

Each lap I was greeted to this poster made by a first grade class at City Park ... pretty cool and also inspiring. 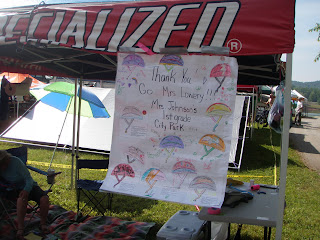 The first 6 laps were pretty similar in time and character.  I met some interesting people, gave some encouragement to the other solos and just enjoyed the day.  I rode with Denelle almost one full lap and we talked quite a bit ... well, she did most of the talking.  Very nice getting to know her more.  Dan was racing his first 24 as was Mark.  Both did very well and reminded me of the suffering I experienced doing my first.  Stephen, a friend of Stan's, was out there, attacking it as well.  Stan had given him strict instructions to give way when I came up on him and he politely obliged.  For the most part, the passers and passees were very courteous.

Up until 6 pm, I was eating on the trail as well as grabbing food at the pits and shoving it down.  My belly was happy and the legs sparkly.  Each time I came out of the woods I looked up and was greeted by blue sky and a few white clouds.  Would it be a rain-free race?

After the 7th lap, I made a slightly longer pit and had a mini meal consisting of 2 pop tarts, 2 cooked egg whites, and a Dr. Pepper.  Just in time as my stomach was growling.  I also reapplied Chamois Butt'r.  Having been branded by my chamois in a 12 hour race, I was not wanting to relive that most painful experience.  While I ate, Zeke and Bike Dougster cleaned and lubed my bike.  I don't know who was being better taken care of:  me or Stumpy!

Laps 8, 9, and 10 were still sub 50 minutes.  I was still in a groove, eating and pacing were perfect. I rode the 10th lap on Indy ('09 Era) so that Stumpy could be fitted with lights. Indy was a different beast: quicker, lighter, firmer.  She was o.k. for a lap or two, but riding her for 24 would have hurt.

Lap 11 started off no different thatn the previous 10.  However, midway through, I felt really full.  I did not eat during this lap.  As I came to my pit after finishing this lap, my stomach started feeling queasy.  NOT GOOD!

Mom had just started cooking some potatoes.  I thought my issues were probably related to a simple sugar overload.  I swapped out my Camelbaks and headed out for number 12 praying that my food would stay down.

I think the banner the kids made you was great!