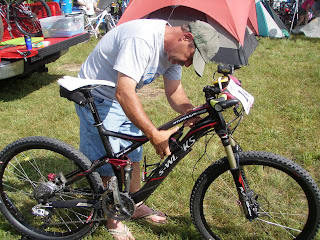 Before I get started, I must insert a funny here.  The Bike Dougster was in charge of putting lights on Stumpy.  Well, midway through Lap 11, I turned on my lights.  Helmet light, perfect.  When I turned on my bar light, the beam was directed up at the treetops.  For a brief moment, I thought that Batman might come swooping down, having been called into action by my light.  I must say, it takes some skill to adjust lights while riding in the dark, but I got it done.

One of Coach Lynda's pieces of wisdom pre-race was to have a plan, but expect and allow for that plan to change.  No matter if you have done 1 or 100 24's, there is always a surprise lurking around the corner.  And it is how you deal with this surprise that will determine the success of your race.

My surprise was that my stomach was heading South ... quickly.  Silly me for thinking I could exist on blueberry newtons and Cliff Shot Roks the entire race, when the longest I had trained on them was 8 hours.  I was OD'ing on simple sugar.  Thankfully Mom was there, cooking potatoes.  They would be ready by lap 13.

I headed out on Lap 12, knowing that the plan was going to have to change.  I knew what to do; now to get it done.  I backed off the intensity just a bit and thought positive.  The only time I got sick at a race was the 2009 Firecracker 50 and that was because of the altitude.  My thoughts turned to Kip and his DNF here one year when his stomach turned sour.  I was determined not to become a casualty here tonight.

I was not in my place of happiness during laps 12-16.  I told myself a couple times that a slow lap was better than no lap.  I was only able to take in about 50% of the calories I needed.  However, after switching my foods from sugary to salty, potatoes and chicken rice soup, I started returning to normal around 3am.

Besides my sour stomach, the other evil at night were the roots.  They got wet and slicker n snot due to the high humidity and the moisture retained within the trail from the previous day's rains.  There were enough floundering racers on the course to keep me alert and cautious.  Even with my Light n Motion Seca 900 helmet light and HID bar light, some of those roots were able to hide in ambush.  During lap 19, one grabbed my front wheel on a descent on the Exit trail and threw me down hard.  Only my pride was hurt or so I thought, until I made it into the pits and Zeke's motherly instincts kicked in when he saw all the blood on my forearm and glove.  Wow, there was quite a bit!  Once we got the mud and blood cleaned off, it turned out to be only a little flesh wound.

Lap 20 was the sunrise lap.  This is my favorite lap, no matter if I am sparkly or deep in the pain cave.  The birds alert you first, even before you see the faint hint of light.  At this point, even though there are still at least 6 hours to race, you know it is almost over.  Yes, I was tired, but new life seemed to run through my being.  The legs can push harder, the heart can pump faster, and your alertness rises 10-fold.  A can of Monster Java always helps, too!

Lap 21 my good friend Kip came rolling up behind me.  I actually heard his voice before I saw him.  Chatting with others, that's Kip!  He helped my mojo and power transfer.  By this time, I knew the course pretty well and knowing that I would not get lost, I was happy to chat back!  He he :)! (inside joke).  That was a great and fun lap.  Even with the dufus that wanted us to get off HIS trail on a tricky descent since his team was racing for 5th!

During lap 23 which was around 8:30am, I started doing the math.  A 26th lap was definitely doable, but could I squeak out a 27th?  Feeling strong again, I was able to pick the pace up.


On lap 24, I crashed going in to the hardest switchback of The Snake.  A slow speed crash due to exhaustion, but I ended up tweaking my right ankle.  Ughh!  The ensuing laps came with varying degrees of Achilles pain. 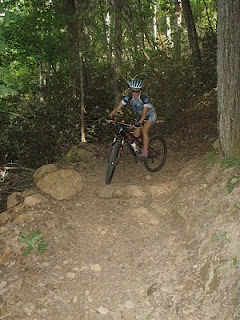 From lap 24 to the finish, I changed nutrition to fluids and gels.  Thankfully, I was able to take in sugar again without nausea or bloating.  At this point, solids became intolerable.  I fueled on HammerGel, Silk chocolate milk, and Rapidade.

My lap times hovered in the low 50's and with 5 minutes to spare,  I went out for my 27th lap.  Now this one hurt!  The climbs were fine.  It was the descents that were so painful!  Every fiber of my being was jarred to death.  I was never so happy to see that final descent.  One more time hitting those curves horizontally.  Hoo-rah!

24 hours and 48 minutes later, my journey was finished. 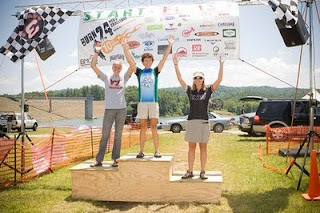 It was amazing how fun this race was.  The previous 24 hour races I have done were much harder and filled with more low points.  I suppose the reason for the awesomeness of it is that I was racing for something rather than against someone.  Knowing that I am making a difference in someone's life made it easy to suffer.  And we 24 hour soloists already enjoy that kind of suffering to some degree anyway.

Thanks to my pit crew for making it possible.  Zeke was able to add some fun and make me smile in the wee hours of the night.  He managed to borrow some glowing balls to make a lighted pit row entrance.  It reminded me of the lights you see on an airport runway in the middle of the night.  It made it really easy to find my pit, too.  Zeke also ran 8 100 yard dashes from our pit to the Start/Finish line to give me words of encouragement on those night laps.

The Ergon GR2 Leichtbau carbon grips were SWEET.  The pain I experienced in my palms on the last lap went away later that night.  No blisters!  I used the bar ends not as levers during climbing, but for just different hand placement which helped tremendously.

My bikes were flawless, thanks to Bruce and Specialized.  And I really noticed a big difference in braking power between the Magura Marta SL's on Stumpy and Magura Marta Mags on Indy.  No chamois brand this race, thank you very much Chamois Butt'r!

I challenge every racer to do at least one race for a cause.  It takes a bit of extra work, but the rewards are endless.  And I do believe it makes you faster!
Posted by Carey Lowery at 10:35 AM
Email ThisBlogThis!Share to TwitterShare to FacebookShare to Pinterest
Labels: Burn 24 Hour, Chamois Butt'r, Ergon, fundraiser, magura, racing, Specialized

Great race report. I had to laugh when I read about your "flesh wound." After seeing Zeke's wound, I think anything would look minor compared to that! Glad they were able to nurse you back to help for a strong finish. You are amazing!

Enjoyed your race report. I didn't make it to the Burn due to unforeseen circumstances. I will send you a check this weekend. Congratulations! I hope once the playground is constructed that you will share pictures of it!!! Great job in the race!

My name is Stephen said...

Great write up, and great race!! You rock!