Round 1 of the ChainBuster 6/3 Hour racing series took off this weekend at Tribble Mill Park in Lawrenceville, Georgia amidst chilly temps and bluebird skies.  I was racing the 3 hour on my single speed in preparation for Marathon Nationals, a mere 3 months away.


I had been "off" my game for the past 8 weeks and was looking forward to coming out of my slump.  On Friday's pre ride, I chose an easier gear as I was concerned about top end power.  At the very least I would get in a great neuromuscular work out on Saturday.

The start had us launching across a field of grass, followed by a hard right and funneling us down to two-wide with a hard left turn at the bottome of the hill.  Talk about nerve-wracking.  Luckily, there was no rubbing,  but wave after wave of racers passed me in this brief parade lap.  I wished I had been strong enough to push a harder gear, but I would just have to bide my time and make wise passes over the 7.4 mile course.

With nothing too technical on this up and down, twisty course, those who could maintain speed through the pine needle laden corners and chattery sections of trail would have the advantage.  It was actually a great course for a single speed.  There were 4 flat sections that I lost time in, but it also allowed me a chance to drink and recover before the next hammerfest.

On the first lap, as I awaited for my legs to come around, I followed Maria.  She was faster on the flats and smooth ribbony sections, but I was able to reel her back in on the climbs and the rocky areas.  I made my move on her towards the end of the last lap, when she bumbled just a bit on a tricky climb.  After the pass, I tried to punch it, but my legs bitched and moaned until I settled.

Knowing that the day wasn't going to be stellar, I focused on staying off the brakes and finding flow through the corners.  The day was too beautiful not to just enjoy life.  Besides, just before race start, my husband had texted a picture of Carly shooting her first duck at Daddy's Cache'n In Duck Club in Arkansas.  It was the last weekend of the season and a youth only hunt.  That made my day!

The second and third laps were just about surviving and holding my position.  My gearing on these two laps was almost too hard.  It was a grunt-fest on the final two climbs of each lap.  At least traffic wasn't too bad.  Some of my passes were not the cleanest, and for that I apologize.  The last thing I want to do is spoil another racer's momentum.

I finished with 3 laps in 2:26, good enough for the W in my age group (I was the only one), and 2nd overall.  Huge congrats to Emily for the overall.  It is great to see some younger women jump into the world of dirt. 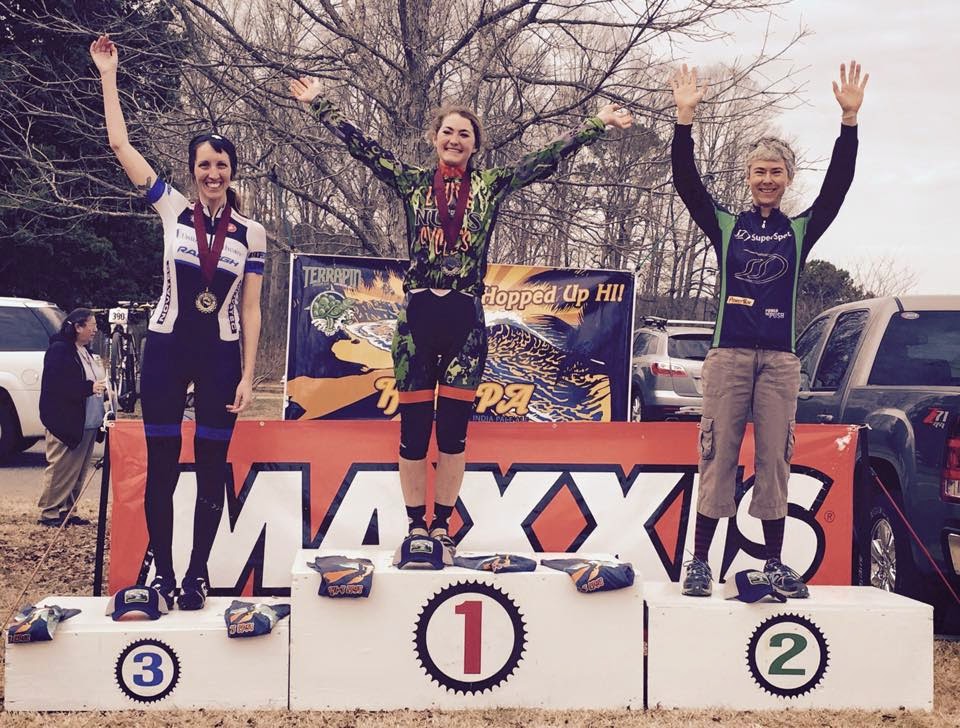 I've got alot of work to do to get back to my "A" game.   I just need to figure out what has been "gumming up the carburetor."