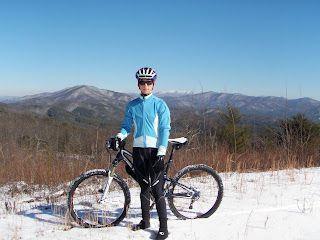 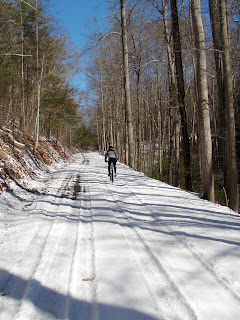 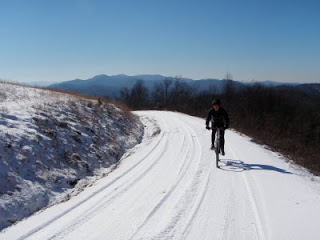 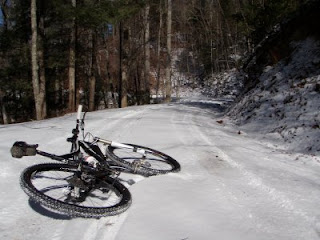 I arrived at the "Dead Goat" parking lot today full of energy. Two days off and I was ready for a little heart-pumping action. This parking lot at the base of a forest service road is more of an illegal dumping ground than an actual lot. A couple of years ago it got its name when a bloated, decaying goat carcass was smelled then found.

After changing into my riding gear, I got out of my truck and immediately stepped right into a pile of human feces! Ahh, jeez! On my shoe and my neoprene bootie! I should have seen this as a bad omen and quit even before I got started.

Zeke arrived and we started off on a 6 mile climb. The woods were beautiful today, what with the 2 inches of snowfall Mother Nature had provided for us. I was up ahead and about 10 minutes into the climb, I heard a "thud" behind me and then some mumbling and grumbling. Seems Zeke had another one of his slow-speed falls when he hit a patch of ice. I told him to quit showing off and come on!

The climb took us about 45 minutes and we were rewarded with a spectacular view of the mountains. We headed back down off the bald to hook into some singletrack and it was then I knew I had made the wrong glove choice. Brrrr!

We started in on the singletrack and only made it about 1/4 mile when I told Zeke this was not a good idea. This was too technical of a trail to be playing on it in 2 inches of snow/ice. All I could think of was one of us breaking a collarbone.

We still had some ride time left so we opted to go back down the climb and do a repeat on it. I had good intentions, but by halfway down, my hands were so cold and the pain so intense, I could barely get them to grab the brakes. All I could focus on was getting to the truck and warming my hands around a cup of hot coffee!

All in all, it was an o.k. day. Got a bit of tempo in, saw some spectacular scenery, and learned to look before I step ... in Polk County!
Posted by Carey Lowery at 7:52 PM
Email ThisBlogThis!Share to TwitterShare to FacebookShare to Pinterest

nice pics, I went up there last weekend and discovered some great trails, but missed the bald. I will go back.