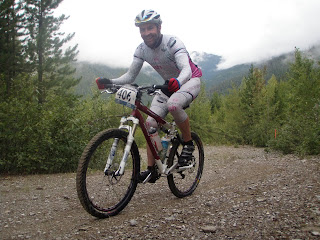 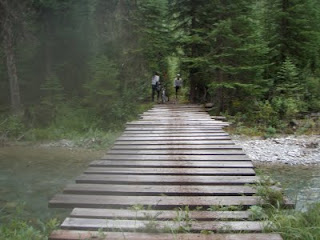 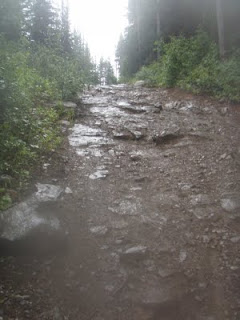 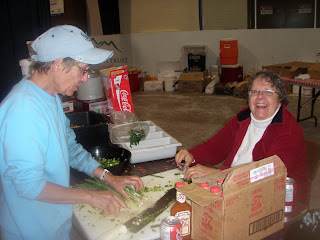 For those of you who ride in the Southeast, this stage is like the Firewater 50 ... on STEROIDS! Once again, the skies were dark and moisture was in the air. Sleep for me did not go so well last night, as the dynamic duo was busy sawing logs. I think the decibels increased during the week as the camping conditions slowly deteriorated. This was not the vacation Mom and Bike Dougster had anticipated. So about midnight, I drug my bedroll out of the tent and slept under the stars ... thank goodness it did not rain during the night.

Zeke did not start today. So I joined the Tinhorn Creek team. They were gracious enough to allow me to pound out the muddy miles with them today. The start was OMG fast as it was 15km of flat to the first check. I was able to hold on with the lead group to the check, constantly dodging pig wallow-size mudholes.

After the check began a 12km climb. This was the one where Lisa and I got separated from each other last year and about had a panic attack. I was feeling good and was at the top before I knew it. From here it was a cold, washed-out gravel road 12km descent. I ended up dropping Mark and Keith and passing the Vanderkitten/Velo Bella team. Luckily, I managed to hop onto the wheels of a South American team who pulled me to the second checkpoint. This 6km section of road was so soft it was like riding on a marshmallow.

After eating some cookies and drinking a coke (comfort food at this stage of the game was a lot better than properly fueling with bananas and HammerGel), I continued on alone. Once I hit the trapper's trail, I got into a happy groove! Just as I was crossing the bridge, I heard a grinding of gears, followed by a series of cuss words from the guy just ahead of me. As I approached him, I saw that his rear derailleur had been ripped off by a stick. I felt bad for him, but good for me ... that the stick lodged in his bike and not mine.

I rode carefully on the rest of this trail as it was littered with sticks. It began raining pretty heavily (hour 3). I stopped and put a shower cap on my helmet and drudged on through the slop of an active logging road.

Cold and miserable, I stopped at checkpoint 3. Hot coffee! Hot damn! I did not care that it was black (I love creamer), I had two small cups, along with a couple more cookies. From there at kilometer 68 began the Firewater section. After 150m on the bike, I was off, hiking up a 200m steep ass rocky section. I put "Crash" on my back and slowly, step by step, began climbing. As the rain was pouring down, I heard a sloshing noise. Within 15 seconds, I knew where it was coming from ... my seat tube. As soon as I was able to find a flat area, I put my bike down and turned her upside down. To my amazement, a river of water poured out! I wondered how many pounds that must have weighed and how long had I been dragging that around!

Next up was the infamous rock garden, a 1.5-2km section of nothing but large baby-head boulders, just waiting to slash your tires or your skin. At this point, I was just so wanting to be done that I did not think about the consequences of crashing; I was relishing a hot shower. My tires, Specialized Captains, were hooking up well in the wet, so I went for it. Thankfully, and perhaps skillfully, I rode almost all of it, save for just one 200m section. It was here that I almost endo'd so I hopped off and ran it.

Last year, the remaining 12km after the Rock Garden was all downhill to a gravel road into Elkford. Thinking it was the same course, I knew I was almost home. But then suddenly, a right-hand turn appeared. WTF! This quad trail was going UP! Tired, cold, and muddy, I dropped down into granny and with my head down, began to slowly pedal in agony.

This "new" section was 3km of rolling doubletrack had me pedaling through 1-4" of mud THE ENTIRE WAY. Finally, after what seemed like an eternity, I passed under the finish banner in Elkford. The residents here were so nice; they had hot chocolate, hot coffee, and blankets for each finisher. Zeke was there, blanket in hand. And yes, it was still raining. That final effort through the slop had warmed my core a bit, so I said no to the blanket, but yes to the hot chocolate.

Then I was off to the showers, while Zeke took my bike. Warm water never felt so good!

Even with riding most of the day by myself, I was able to place 4th in my category. But with Zeke not starting, this put us in to the unclassified category. We were no longer able to compete for O/A or stage wins. Yeah, this hurt my pride a bit. Even though, we were not "official" anymore, I was still competing. And if nothing more, these were excellent training rides, testing not only my physical abilities, but my mental tenacity as well.

Seeing my parents, huddled in their rain jackets, trying to stay warm and dry in these terrible conditions, made me feel so bad. They were troopers, still placing my comfort and well-being above their own. Even though I am 40 years old, to them, I was still their little girl!

Once again, the cooks had prepared a most delicious meal. I think they had it harder than I, as their daily regime begain at 3am and did not end until 9pm. Dinner was steak, potatoes, and spinach salad. I could not believe how much I put down the hatch!
Posted by Carey Lowery at 8:52 AM
Email ThisBlogThis!Share to TwitterShare to FacebookShare to Pinterest

Doug and Sandy are awsome humans ! They were selfless and forgiving . What a miserable vacation !!! Hats off to Charlie who was home and doing fatherhood . -- Zeke