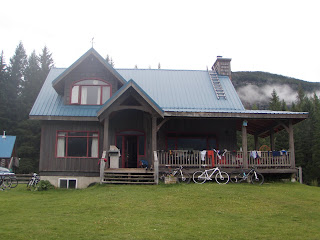 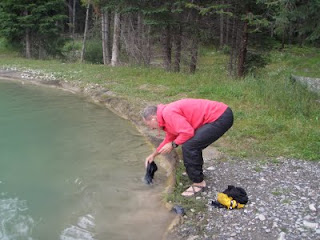 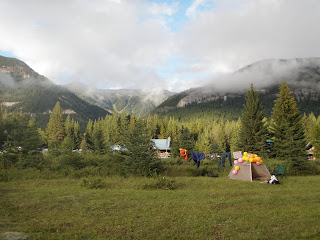 I got a good night's sleep (no snoring companions) as Zeke and I arranged to bunk in one of the cabins on the property. With an 11:14am start, we got to approach the day without any haste. However, we woke up to a light rain which began to intensify as the day grew.

This is one of my favorite stages, mostly singletrack, on Nipika's property. Last year was dry and fast; this year, not so lucky. I was anxious to get started and we both were wanting to know how the knee would hold up.

Although the quads were sore off the bike, I felt fresh. With teams heading out every minute, I was ready to go after "the rabbit." The Bike Doctors, currently in 4th, left 8 minutes before us. "That's doable," I thought to myself.

I led into the singletrack and for the first 10 minutes, I could not find a rhythm, especially on the slick, wet roots. The course was a figure 8 configuration and this year the first loop was run the opposite way as compared to last year.

Soon enough, I had found the flow and was enjoying it. And Zeke was right on my wheel! Could a miracle have happened last night?

The trail was really muddy, mainly along the gorge. Not so good since the trail was only a couple feet from the edge at times. A couple times I unclipped one foot and on one scary section, I got off and walked ... one slip of the wheel would have landed me 150 feet below into the Kootenay River.

Last year the descent along the National Park boundary was fast and fun! This year it was a muddy slog up, with alot of hike-a-biking (or slip-slide-a-biking). The rain was off and on during the race. The glasses were off pretty quick as the mud built up on them. Then came the task of fast-blinking ... kind of like turning your windshield wipers on high during a blinding rain shower.

Even considering how muddy it was, the first half of the course flew by. Once we entered the second half, I could tell that Zeke's knee really became painful as he slowed quite a bit. A couple times I had to wait on him.

We passed through the "Happy Trails" section. This is a fast, fun-flowing, and slightly technical section along the gorge. The entrance was decorated with "Crazy Larry's" balloons. And he was there, in raingear, cheering us all on.

We managed to finish in 4th place on the day, just 5 minutes behind Team Cox. Not bad at all. We did not catch the Bike Doctors. I was happily surprised at how well Zeke had done on this technical stage. He is always strong on the fireroads, and today he rode the singletrack like it was a fireroad. He was grimacing at the end, but with his performance today, he kept us in the running.

Afterwards, we handed off our bikes to Bike Dougster and made a beeline for the showers. Still feeling great, I was looking forward to Stage 5. And praying that the sun would shine for tomorrow's stage was going to be a long one.