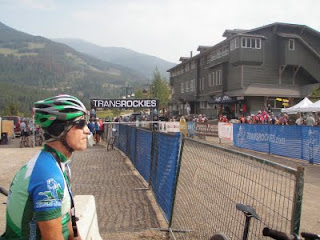 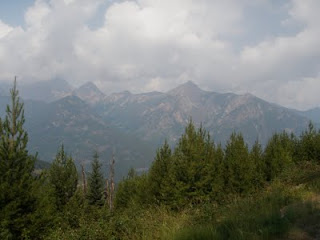 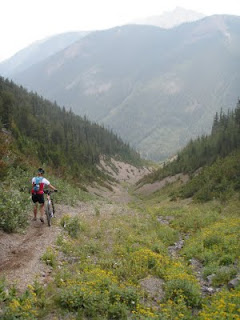 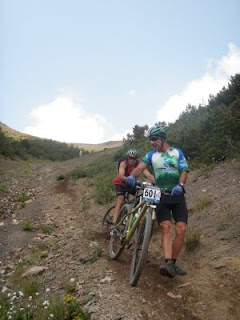 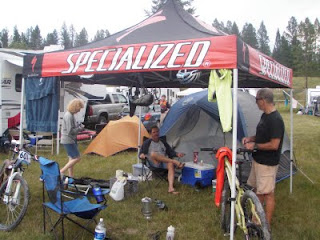 Sunday August 9, 2009
Stage 1: Panorama to K2 Ranch
Distance: 48K
Climbing: 2267m
Time: 3:58:30
Temperature: 60 degrees
Today's start was at 11am and both Zeke and I had high expectations for Team Specialized/Kudzu Mafia. We both had a good leg opener the day before in the Kootenay N.P. along a trail called Dog Lake.
I awoke at 6:30am. I could have slept longer but for my parents who were snoring in unison. Zeke was also doing at good job at making some noise; not exactly snoring, but more of a puffing of the lips.
At the start, we put ourselves in a position to be at the front. The parade lap around Panorama is at a furious pace and we wanted to be up with the leaders heading up the ski hill doubletrack. I was happily surprised to get a call-up, being last year's Open Women's winner; Lisa's name was also announced.
AC/DC's "Highway to Hell" was to be the start song for each day's stage. When the clock hit 11:00, we were off. Fast! No sooner had we hit the 12km climb to the top of the ski hill when my legs seemed to lock up. Not quite ready for this pace, I backed 0ff a bit to let my legs come back to me. Zeke was just ahead. After about 2km, I found my legs and set a comfortably fast tempo. I positioned myself just behind Zeke.
Shortly after the 10km mark, the Norwegian team of Giesla and Hans passed us ever so slowly. Zeke seemed to be slowing a bit, but no worries. After all, we had a long week ahead of us. With about 1km to go to the first check point/aid station, I grabbed Zeke's bottle and raced ahead.
I arrived and the Norwegian team (Team Cox) was there. I quickly refilled Zeke's bottle and grabbed several bananas. Zeke rolled in and we left with Team Cox.
From here there was an 8km technical section of singletrack that ran along the spine of the mountain. Lots of short hike-a-bikes interspersed with some sweet riding, both up and down, and along some seriously off-camber scree fields. Zeke took a little digger on one of the techy descents. We yo-yo'd with Team Cox all the way to the 2km avalanche chute descent.
This 30-40% descent was a quad-killer and knee buster. If you tried to ride it, you risked puncturing or falling for a L-O-N-G way! I could run it just about as fast as riding it. Unfortunately for Zeke, this section undid a 12 year old arthroscopic procedure on his left knee. Towards the end, it became pretty excruciating for him as I suppose his damaged meniscus was flapping back and forth in his joint.
Finally, we remounted our bikes and after a bit more singletrack, we hit check #2. Refilling on water and bananas, we tried our best to make up some time on Team Cox, who gained a lot of ground on us during the chute descent.
Zeke flew down this 10km rocky doubletrack descent. I was right on his wheel, all smiles. Once we hit Brewer Creek road (gravel), it began to roll for the next 5km. Zeke began to slow a bit, so I took the lead and tried to get him to fall in my draft. Yeah, I know I am not much to break the wind, but every little bit helps.
We rode through the edge of a hailstorm and got to experience marble-size hail pinging off our helmets and bikes. Luckily, this did not last too long.
Soon we were on to K2 property and dodging cow pies. At the top of the last climb, I could see "tent city" below us. I was eager to finish and enjoyed the descent in to the finish. I think Zeke was hurting a bit as I had to slow up for him towards the end.
We rode across the finish line together. Second place on the day, 15 minutes back from Team Cox. Indy, my Specialized Era, rocked today's stage; she was so light I flew up the hike-a-bikes.
It was nice to be able to hand off our bikes to Doug, my stepfather. From here on out he will be known as "the Bike Dougster." Mom had our post-race meal awaiting our arrival.
I felt great after today's stage. It was kind of like a long XC race for me. I was a bit disheartened about Zeke's injury, but at this point was staying positive.
The meals were 5 star. Today's dinner was sliced roast beef, mashed potatoes, broccoli, green salad, pasta salad, bread, fruits, etc. So much I cannot remember it all. The roast beef was melt in your mouth!
Tomorrow's stage was going to be heinous. We all made it to bed shortly after the awards presentation and photos/video of the day.
Despite his knee, Zeke and I were ready to challenge the Norwegians tomorrow.
Posted by Carey Lowery at 3:04 PM
Email ThisBlogThis!Share to TwitterShare to FacebookShare to Pinterest

Geez, I want to go do it just for the meals :-) Sounds great!

A heads up that I linked to you