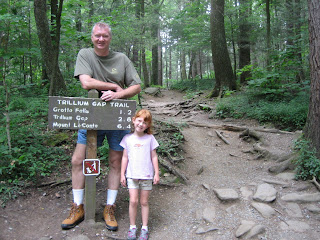 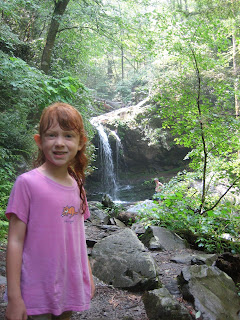 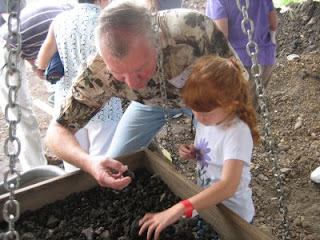 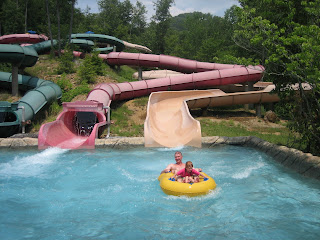 We just returned home from our family vacation. We spent the last 4 days in the "Redneck Capital of the World," Pigeon Forge, Tennessee. Picture the people you would see at a NASCAR race and those were the people that I have been rubbing elbows with. But with the price of gas and our schedules, we chose to stay close to home. Anyways, Carly had a blast and that is the most important thing. 10 years ago, I vowed never to come back to this place ... but then again I had no thought of having children at that time.

Day 1: We went on a hay ride in Cades Cove and were treated to a Mutual of Omaha's Wild Animal Kingdom adventure. We watched as a doe tried to divert a coyote away from her fawn. However, the fawn stood up prematurely, the coyote saw it, attacked, and made off with supper.

Day 2: We went to Dollywood Splash Country, a waterpark. Carly had no fear and rode everything within her height requirement. I must say that I had a great time, too. What I thought was absolutely funny was the pre-recordings at some of the slides. Basically it said that if you were under doctor's orders or were in poor physical condition, you should not ride the slide. Well, hell, that would have eliminated about 65% of the line! There ought to be a law prohibiting bikini wear if your BMI index is higher than a certain value. Yuck!!

Day 3: We hiked the Trillium Gap trail up to Grotto Falls. I think everyone else in Pigeon Forge decided to hike this one today, too. It was a 3 mile roundtrip and fairly easy. But I wanted to stay within Carly's abilities and interests. We did get rained on, but that did not sway Carly's spirits. Carly spotted several salamanders which was pretty cool: a red, a yellow, and a brown.
That evening, we celebrated the 4th at Charlie's parents.

Day 4: We drove to Gray, Tennessee and went to the Gray Fossil Site. Back in 2000, during a TDOT construction project, a 4 acre area of fossils dating back to 4.5-7 million years ago was discovered. Thankfully, our governor deemed this an important finding and the state diverted the road construction around the site. In just 8 years, the storage facility is full of hundred of fossils of tapir, camel, rhinocerous, red panda, saber tooth, and badger. Now, that was cool! Carly had a chance to sift through some earth and look for fossils herself. Unfortunately, all she found was some fossilized wood; no animal fossils. She was disappointed. East Tennessee State University has created a paleontology degree. I can envision Carly working there one day. She has already told me she wants to attend the camp next summer.
All in all, it was a pretty good vacation. Although, I did daydream about riding some sweet singletrack. Now that I am home, I can go out and get my cycling fix.
Posted by Carey Lowery at 7:57 AM
Email ThisBlogThis!Share to TwitterShare to FacebookShare to Pinterest