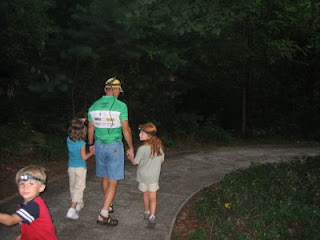 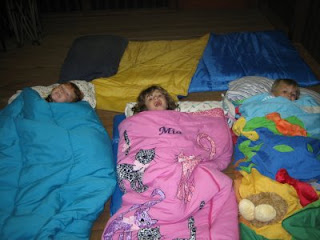 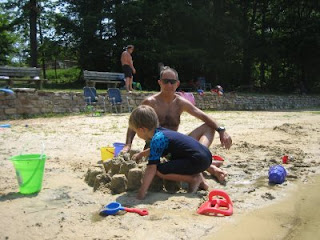 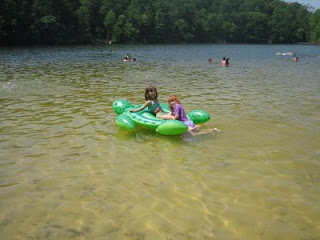 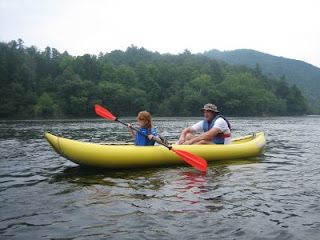 This weekend was a huge success. I do not know who is more tired: the adults or the children. Even though the adults outnumbered the kids, I think we were no match for their energy.
We met up with Zeke and his son's family (John, Ann Michelle, Mia, and Gunner) Friday night at the Whitewater Center for a night hike. The kids had fun using their headlamps to light the way and fry our eyeballs!
That night the kids (Carly, Mia, and Gunner) got to "camp out" on the screened in porch with Poppy, aka Zeke. Gunner lasted about 5 minutes once the lights went out. Then he ran back into the house to sleep with his mom. It may have had something to do with Poppy telling them a ghost story.
Saturday morning we headed to Lake McKamie on top of Chilhowee Mountain. We first stopped at the Whitewater Center and watched as the water was released into the Ocoee. The kids thought that was pretty fascinating.
Carly and Mia formed teamed up early on to find newts. They were successful and caught one pretty quickly. But he escaped from "the moat" as the girls were off looking for more to catch. Gunner enjoyed making sand castles with Poppy.
Then they all got on the turtle float and enjoyed being towed around the lake. However, once Poppy and I began the game of flipping them off the turtle, Gunner decided he wanted no part and got off. The girls enjoyed face-planting into the water. When they came up sputtering and coughing, they screamed, "Again, again, Poppy!"
John took it upon himself to be the cook. While we were busy having fun in the water, he was sweating over the grill and fighting off yellow jackets. But he cooked up some mean burgers and dogs!
Each of the adults did manage to slip off for an hour. John and Ann Michelle ran the trail and then Zeke and I rode some singletrack. The kids also brought their bikes and pedaled around the lake perimeter.
After dinner at Good Fella's, we went back to Poppy's house. Even though he has only one bathroom, the 7 of us managed to get cleaned up in less than 2 hours ... and with hot water. We managed to get the kids to bed a bit earlier, which was a blessing for us. This is supposed to be an off week for me, but man was I pooped.
Today we headed over to the Hiwassee Outfitters for a trip down the river. We all had "duckies" except for Poppy, who brought his flatwater kayak. Kim also joined us in her kayak. John was worried about Gunner being frightened by the rapids, but as he soon found out, Gunner enjoyed the fast water.
Ann Michelle will probably be the sorest tomorrow as she managed to find every rock in the river and got stuck numerous times. Kim was the "river angel" of the day as she was able to manuever in her boat and get the stranded ones back to higher water.
Poppy stayed the coolest today as he managed to capsize twice. I now know why he invited Kim. She was the one to catch his kayak and bail the water out.
Carly seemed to get a bit bored this time. After all, this is her third year in a row. She was the happiest when hitting the rapids, but did not like the slow-moving water. She is ready for more Class III rapids.
After the trip, Kim was kind enough to give the girls some lessons in her kayak. Now Carly was all about that. She liked Kim's tiny little kayak and did very well paddling from Daddy to me and back again. Looks like I will be taking lessons next year alongside Carly. Now to just find a purple Jackson kayak!
After the float trip, we all went our separate ways. I really enjoyed this weekend. The kids had a blast and wanted to know when the next Camp Poppy was going to be. We will have our work cut out for us next year to top this one!
Posted by Carey Lowery at 5:40 PM
Email ThisBlogThis!Share to TwitterShare to FacebookShare to Pinterest

Hi Carey. LillyIII here and we also had a great time a Camp Poppy. Thanks for being so kind and nice to my family! We had fun with Charley and Carley all weekend. Good luck to you and Poppy on Saturday in Penn!