Getting my Speed Fix 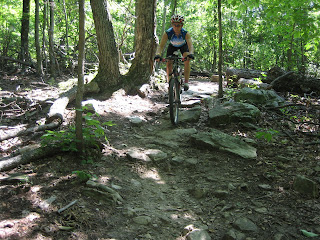 With a free weekend and the venue being so close, I could not pass up this race. So I journeyed down to Chattanooga for the SERC Raccoon Mountain XC race. After having been in the ultra-endurance scene for several years, getting to race an XC event is just a little reward for me. It also allows me to get in some good speed work, especially when toeing the line with some of the best from the Southeast.
Fourteen of us lined up in the Pro/Ex class. Awesome turnout! When the gun went off, several girls lept off the line, including superfast Jamie Dinkins, just back from Under-23 Worlds where she had a top 20 finish. I managed to enter the singletrack just behind Jamie and kept her within my sights for the first half of the first lap. I was feeling strong and loving the techy rocky sections as well as the Six Flags rollercoaster descent.
Stumpy was my steed for the day and we were one, attacking the punchy hill climbs and letting loose on the descents. I almost had my first lap (12 miles) completed when I heard the dreaded, "Hssssssss! Well, crap! (not exactly the same word that at first entered my mind) I pedalled on hoping for it to seal. I rolled through the Start/Finish and heard no more hissing so I hoped that all was good. Kim handed off my bottle for the second lap and told me I was just a minute behind Jamie. I time-trialed the 1/2 mile pavement section and dropped into the woods. Legs were still great, but my mind was elsewhere as I began to feel the dreaded "squishy" in the rear tire.
My tire change was embarassingly slow. I was having a hard time getting the Specialized Fast Track off the rim, even with levers. After probably 5 minutes, I managed to hop back on the bike. I had no idea how many women passed me as I made a conscious effort not to look up everytime I heard wheels buzzing by. However, Kym called out to me and asked if I was o.k. and then I happened to see Paula go past as well. Ughh! It took a bit for me to get back into the rhythm of racing again, but I did.
The last mile of the race, I tried to ramp it up a bit, just to see how the legs were. Legs still great, but then I hit a rock pretty hard and pinch flatted. So, I got to run a bit (good practice for TransRockies) and then rode the last little section of pavement to the finish ... but very slowly as I did not want this event to get any more expensive with a bashed rim.
I managed not to lose any more spots once I got back on the bike, but apparently quite a few women passed me as I ended up 7th. Oh well, I would much rather have a bike mechanical than a body mechanical. I hope to be able to stay on form for my next race is Wilderness 101 ... my favorite hundy and I would like to do well there.
I am having some frustrations with the Stan's. Every time I have punctured (other than thorns), the Stan's has not sealed and eventually I have been forced to put a tube in. I am beginning to wonder if I should just use enough Stan's to seal the tire (if the tire leaks down in a short period of time) onto the rim and not to put any extra in. Getting all that dried latex off my bike today was a b!tch. If anybody has any comments on that, I am open.
Posted by Carey Lowery at 9:21 PM
Email ThisBlogThis!Share to TwitterShare to FacebookShare to Pinterest

You are racing/riding so strong! I think that you are going to have a great race at Wilderness.

I've been having problems too, but it depends which tires I am running, I have found. I'm using MTB, Prowlers and Nanoraptors. I think the sidewalls on the Prowler's are too thin, but the Nano's rock!
I've finally "blogged up," so link me if you like!