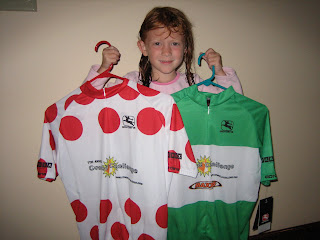 Kudos to Taylor, Anna, Connie, et al for a wonderful event. If you haven't had an opportunity to race the Cowbell, next year is a must. This year the venue was at Fisher Farms and at first I was a bit worried that the course would not be as fun as last year's (Catawba Trails at the Whitewater Center). However, after pre-riding, I saw that A LOT OF TIME and EFFORT had been put into stretching the existing 4 miles of trail into 7 miles. This course was going to be fast! You were going to be on the gas at all times. The climbs were short and steep, the singletrack was tight, twisty, and rooty, and the flat field sections were jarring. Anna and Connie had put in a lot of "woman hours" moving and laying large rocks by hand to create a sweet technical rocky descent!
We lined up at the start ... with our bikes. Yeah! No running start! When the bell went off, I made a huge effort to get in the front as I wanted to get into the singletrack first. I was going for the Queen of the Mountain again this year as I needed a jersey to match my helmet from last year. I raced the first lap like I was on a team. And my legs were light and snappy... completely opposite of how they felt at the Mohican. I knew Rebecca was close behind so I just hammered it and was able to top the 5 climbs first.
After the first lap, I settled in and rode my race. Rebecca passed me on the second lap. No worries; I was feeling good and kept her in my sights. I was just happy to have my legs back. My goal was to be able to stay within striking distance of Rebecca and put more time on 3rd and 4th place. And so I did. By the 8th lap, I had lapped 3rd and 4th place, yet was only 15 minutes behind Rebecca.
I really did not have any bad laps. Yet I must admit that it was mentally challenging to ride such a short lap over and over and over again. At most 12 hours, by the time I have ridden 10 laps, the race is over. But I still had 5 hours left when I hit the 10 lap mark! Bruce Dickman managed to keep it interesting by heading out to different points on the course and challenging the racers with a bullhorn in hand to make it over a couple of the harder sections without dabbing or coming off the bike.
A few times during the race, the skies darkened and a few thunderclaps were heard. But luckily they moved on around us. I was glad, for having to stop and then start the race again would have been dreadful. And the course would have become treachorous, as it was a clay base with lots of roots.
At 7:30 pm it was lights on. I rolled in the pits around 7:45 pm, switched bikes, and decided that I would try to get the fastest female night lap. I was still feeling good at this point so I said to self, "Might as well try." I put in a super hard effort and managed, after 10 hours, to get my heartrate back up into my LT range. However, Rebecca beat me by 2 minutes. That was Lap 16 for me and as I pulled into the Start/Finish area, the race was called due to lightning in the area. That was o.k. by me; I was pretty pooped by then anyway.
Race Day Highlights:
1. finishing second, just 25 minutes off Rebecca Rusch.
2. winning the fastest female lap.
3. having Mom and my stepdad Doug there for support.
4. being able to use bottles instead of a Camelbak (oh, the freedom!)
5. Yuri Hauswald's comment to Zeke as I crossed the finish line on the last lap, "Your wife is superstrong!" (I am still not sure how to take that one.)
Race Day Lowlights:
1. not using enough chamois cream and subsequently being "branded" (Ouch!) by my chamois. Yes, I now have 2 nice "C-shaped" deep abrasions where my glutes meet my hamstrings.
2. watching the 3rd place female singlespeeder stepping up on the podium and receiving her prizemoney and two 6-packs of beer ... and is 4 months pregnant! Stupid, I say, perhaps even negligent. And I can say this as I am a mother, yet was smart enough to stop racing during my pregnancy.
Thanks to the town of Davidson for allowing the Cowbell to happen. This event just keeps getting better and more competitive. And I hear that more trails could potentially be built at Fisher Farms. All I can say is, "Build it and they will come."
Posted by Carey Lowery at 8:50 PM
Email ThisBlogThis!Share to TwitterShare to FacebookShare to Pinterest

Congrats Carey. You looked strong and super fast the 1,000 times you passed me out there. Good job.

I had to reread the end of your post. I thought that you said the 4 month pregnant lady was racing AND drinking....

Geezz..you're scaring me! I will not be able to keep up! Please don't leave me for the buzzards in Canada!