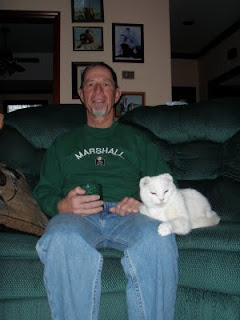 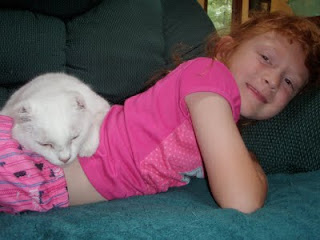 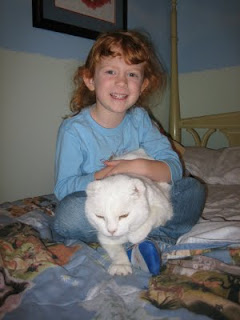 These past few days it has been difficult for me to get motivated on the bike. I started the week off with a cold, the second one in 6 weeks. I attribute this to being exposed to more sickly people and end of season fatigue.

Then, on Wednesday, I awoke to a senseless tragedy. I found Angel in my backyard, mauled to death by a dog. Unfortunately, Carly bore witness as well.

I had adopted Angel in 1999 from a gentleman who had rescued her from negligent owners. When I first laid eyes on her, she had large open sores on her footpads and her ears were crinkled and bloodied from skin cancer. I surgically repaired her footpads and performed a medical ear trim, hence the "ferret look."

Carly first came to know her when Angel slept with her as an infant in her bassinet. I think Angel was instrumental in developing Carly's love of animals and helping her not to develop allergies. Carly was able to "waller" Angel (i.e. to hug, squeeze, tug, pull, and other forms of kitty torture) without Angel never raising a claw or tooth to her.

Just last year I took Angel to Carly's 1st grade class and talked about being a veterinarian. Angel patiently allowed all 30+ kids to waller her, too.

Zeke was the only person outside my family who Angel took up with. Each and every time that he was at our house, Angel would rouse from her place of sleep to greet him. And if he sat down longer than 30 seconds, she would be on his lap.

Perhaps it would be easier to accept her death if her kidneys had failed or she had cancer. I had prepared myself two times in her life for this. One time, when she had acute kidney failure. The second time when she developed autoimmune hemolytic anemia. By the grace of God, I pulled her through both times.

But I was just not prepared for what I saw on Wednesday. And this is Carly's first pet loss. This is what I am having the most difficult time with. My daughter has lost that sparkle in her eye, that cheery smile, that innocence. Welcome to the real world, kiddo!

Given time, the smiles and laughter will return. The happy memories will overwrite the shocking view outside our breakfast nook window. BTW, how long does the anger stage of grief last? Any longer and I am going to kill someone or something!


It's 5am. Do you know where your DOG is?
Posted by Carey Lowery at 2:08 PM
Email ThisBlogThis!Share to TwitterShare to FacebookShare to Pinterest

I'm so sorry, Carey. I hope the pain heals quickly for you and your daughter.

Wiley will be looking over Angel now and won't let any more dogs bother her. When he was alive he would charge dogs and defend his territory and our other girl cat when intruding dogs came around.

Our young dog was attacked in a local park by a pack of three pit bulls in front of my children just over a week ago.

Thankfully, I was able to break up the fight with only one major bite wound to our dog. But my children had to witness the entire episode and have been talking about it since.

Honestly, I think the best therapy is to talk to each other. Let Carly express how she's feeling and let her know how upset you are. These feelings are healthy and talking helps us get through it together.

Unfortunately, they're not much that's easy about an episode like this.