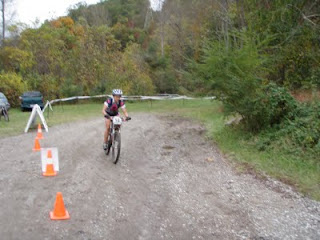 A neutral start up the pavement allowed me to warm up the legs a bit. After 1/2 mile we turned onto a 7 mile gravel road climb. Sue, Cheryl, Brenda, and I rode most of the climb together. Since my legs were feeling good, I decided to pick up the pace a bit. I was anxious to hit the singletrack.

As I passed the first aid station at the top of the climb, the volunteers were cheering for me and calling out my name. As I dipped down onto the singletrack, I heard them cheering again, telling Sue she was in second. Then they asked for her name. Whaddya mean!?! They knew me, but not THE SUE HAYWOOD? I thought that quite hilarious.

Buckhorn Gap Trail was a big ring gentle descent ... well, gentle for Pisgah. I was having a blast! As I turned onto Squirrel Gap Trail, I looked behind me, but saw no one. I continued to rail down the descent. As I was approaching the bottom, my front wheel hit a softball-size rock that launched and hit me square on the knee-cap. The pain was immediate and so intense I got nauseated. I slowed down to assess my knee. I did not feel any grinding and the pain did not change throughout my pedal stroke so I assumed nothing was broken. After soft-pedaling for a few minutes the pain subsided to a dull ache. Close call!

This allowed Sue to catch back up to me and together we climbed up the steep rooty, rocky, ledgy portion of Squirrel Gap. Not wanting to bobble in front of Sue, I remained completely focused on the trail. I dabbed a couple of times, but luckily I was far enough in front of Sue to not knock her off her line. It was very inspiring to have Sue commenting to me about my riding ability.

On the second steep climb, my rear tire spun out on a waterbar. I gave the lead to Sue at this point. It was great to watch her lines. I feel that I cleaned more sections than I would have had I been in the lead. I managed to hang with her until the Laurel Creek descent. Smokin' Sue dropped me at this point.

I saw Sue again for a brief moment as I started up the second gravel road climb. This road was pretty soft and I had to constantly keep on the gas. As I approached the second aid station at Yellow Gap, Trish told me that I was just 2 minutes behind Sue. I grabbed a bottle, a new gel flask, and headed out onto the next 6 mile section of gravel road.

I tried to stay with a group of 3 guys, but just did not have the power. This was by far the hardest portion of this stage. Rolling fireroads and headwinds just do not suit me.

Climbing back up the Buckhorn Gap Trail, I was once again in my element. After passing the third aid station, I began the climb up Black Mountain. I stayed on the bike for about all of two minutes. Then the hike-a-bike of death began. I think it was about 30 minutes of pushing, carrying, and scrambling up waterbar switchbacks and multiple rock ledges.

Halfway up this climb, a guy sitting alongside the trail taking pictures said that it was all rideable from here. Well, I think I rode about 100 yards before getting back off the bike. Should have known better; anytime anyone paints a pretty picture for you during a stage race, it turns into a death march!

Finally I was back into familiar territory and, aboard Stumpy, I thoroughly enjoyed the next descent. I figured out here that the faster you go, the smoother it gets! Another shorter hike-a-bike section led to the last 2 mile, 1500m, drop down to the finish. Thanks, Todd, for allowing each stage to finish with such a fun descent!

I passed under the Kenda banner feeling like I had left some in the tank for the next two days.
Posted by Carey Lowery at 7:36 PM
Email ThisBlogThis!Share to TwitterShare to FacebookShare to Pinterest

I love to read your posts, you go to such great races! Love the new picture on the rocks, what trail is it? Looks like fun!

That is the Syllamo Trail system in Arkansas. 50 miles of singletrack bliss!